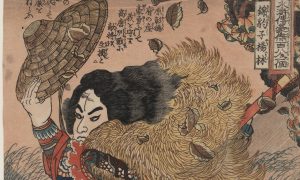 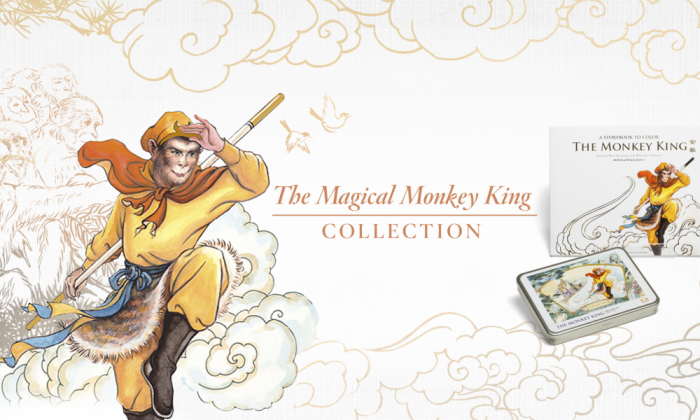 Magic, Legends and Adventures: Inspire Your Children’s Imagination With the Monkey King Collection

Everyone likes a good story, but what makes a story a true gem? Journey to the West is widely regarded as one of the top classics of Chinese literature. Written by the Ming Dynasty novelist Wu Cheng’en during the 16th century, this beloved adventure tale combines action, humor, and spiritual lessons. It has become widely known around the world, featuring unique characters and dynamic episodes that have been the inspiration for international media, including books, TV and film. Shen Yun has adapted tales from Journey to the West for live performance on stage, using the traditional art form of classical Chinese dance, together with original orchestral compositions.

Who is your number one superhero? One of the most popular characters from the novella, and all of Chinese literature, is Sun Wukong. You might know of him as the clever, daring and defiantly mischievous hero also called the Monkey King. His character is unmistakable and iconic and we’ve chosen him as the focus of this week’s post. He has a reputation for being impulsive and unruly, but as we discover, this fictional character has a big, big heart, using his magical powers acquired through the practice of spiritual cultivation to defeat evil demons, protecting the Buddhist monk Tang Seng on his epic quest to obtain the Buddhist scriptures from ancient India. From centuries ago to the present day, he’s garnered quite the fan base… Here are some essential facts you need to know about this beloved monkey:

Every superhero has a powerful weapon. Sun Wukong chose his own: a magic iron staff weighing 8100kg that he can expand or shrink at will.
During his Taoist cultivation, Sun Wukong develops the ability to transform into 72 different things. Not only can he shape-shift, he has super-strength, and he can also fly and make monkey clones from the hairs on his head.
He is immune to lightning and fire. Even an army of 100,000 Heavenly Warriors is no match for him.
Sun Wukong was once given detention of 500 years when his rampant behavior was quelled once and for all by the almighty Buddha, who placed him under a giant mountain and gave Sun Wukong some much needed time for reflection.
Fundamentally, he’s not really a bad monkey, but actually a loyal Taoist disciple at heart who finds his true purpose when given the noble task of protecting monk Tang Seng. He devotes his time and energies to doing good and ultimately fulfills his greatest potential.
Many of Sun Wukong’s adventures have been brought to life on stage through Shen Yun’s adaptations. Not only are the story-based dances entertaining and memorable for children and adults alike (we’re all big kids at heart!), they also carry important moral lessons that are great for our kids to learn from and emulate. One of our favorite stage pieces tells the story of Monkey King and the Fire Mountain:

Tang Monk and his entourage must traverse a scorching fire mountain to reach their final destination where the Buddhist scriptures are held. The only way to go is forward, but in the extreme conditions, it looks impossible. With the pilgrimage at stake, Monkey seeks out The Iron Fan Princess. She owns a magical fan that would put out the flames and ensure safe passage for Tang Monk. Monkey sets out to get it, but the immortal lady won’t hand it over easily, instead she bats him away to the edge of the earth with a wave of the fan. But a divine Bodhisattva comes to Monkey’s aid, granting him a special orb to protect him from the Princess’ furious waves… The orb pacifies her, along with the help of his Monkey clones transformed from single strands of Monkey’s golden hair.

Storytelling then and now

Many of the fond memories we recall from childhood revolve around the amazing stories that inspired our imaginations and creative potential. For those of us who grew up in an Asian household, much of this excitement involved the legendary Sun Wukong, following his adventures to meet heavenly beings and discover new worlds. Through such stories, a slice of tradition and culture is passed down and preserved, from generation to generation. All over the world, we connect with our family and cultural roots through a simple and powerful form of storytelling. Chinese families have been telling the story of Journey to the West since the 16th century! We remember being told those same classic stories by our parents, grandparents, cousins, and teachers, just like our grandparents’ parents, and their parents before them. When it comes to our own kids, we treasure the moments when we can share in the simple joys of superheroes and magical adventures and take a step back from the busy day-to-day to dedicate time to them.

In honor of really good storytelling, our team has curated some wonderful items that celebrate the legendary hero Sun Wukong!

Get ready for the holidays! Encourage your child to start the new year with a bright and curious attitude like Monkey King.

Dive into new heroic adventures with our educational coloring book! Featuring well known stories from Journey to the West plus beautiful hand drawn illustrations, it’s the perfect way to keep kids engaged on vacation. Get creative with the timeless tale of the Monkey King and once school starts, your little explorer will be ready for a whole new adventure of their own with stories to tell to friends old and new. Get yours now!

…Why should the adults miss out? On stage, Monkey joins Shen Yun to overcome evil in dramatic story dances. As a bookmark, he readies to defend your page in the most mischievous way possible. Treat yourself to a little bit of luxury with our bestselling Monkey King bookmark, lined in 24 carat gold.

EXPLORE THE MONKEY KING COLLECTION NOW AND BUY IT HERE!