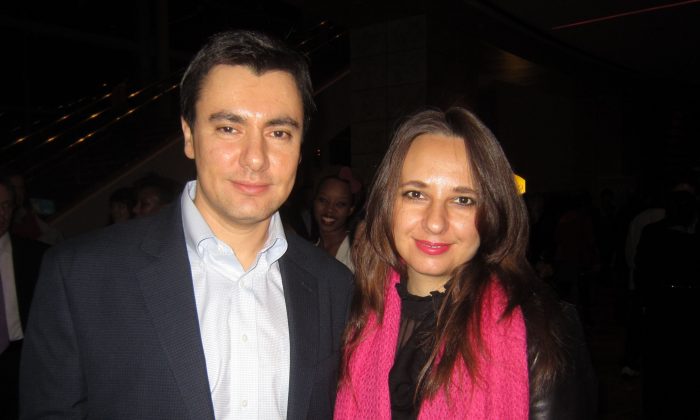 ATLANTA—Dmitry and Anna Goroshin saw Shen Yun Performing Arts for the second time at the Cobb Energy Performing Arts Centre on Jan. 2. The two had first seen Shen Yun two years ago, and said through the performance they learned a lot about China.

There were many aspects of the performance the Goroshin’s loved. Mr. Goroshin said the dancing was outstanding. “Everything is at a very, very high level.”

Mr. Goroshin is the publisher of RussianTown Magazine and is also involved in a number of marketing firms, while Ms. Goroshin is an architect for a local company. Both originally from Russia, they have resided in Atlanta for many years. The two are very interested in Chinese culture and history.

“We admire this show a lot,” said Mr. Goroshin.

The New York based Shen Yun started with one dance company in 2006 and has grown to four companies which tour the world simultaneously. It has classical Chinese dance at its heart but also incorporates folk and ethnic dance. The state of the art digital backdrop adds an extra dimension to the performance.

Mr. Goroshin said, “A combination of video and dancing is enhancing all of the show.”

Besides dances and the colorful animated backdrops, costumes, and props that make Shen Yun unique, the performing arts company is often praised for its music as well. Shen Yun features its own live orchestra that accompanies the dances, as well as award-winning vocalists who sing Chinese lyrics using the bel canto style.

Ms. Goroshin added, “I just love it. It’s really nice and beautiful colors and I like Chinese culture.”