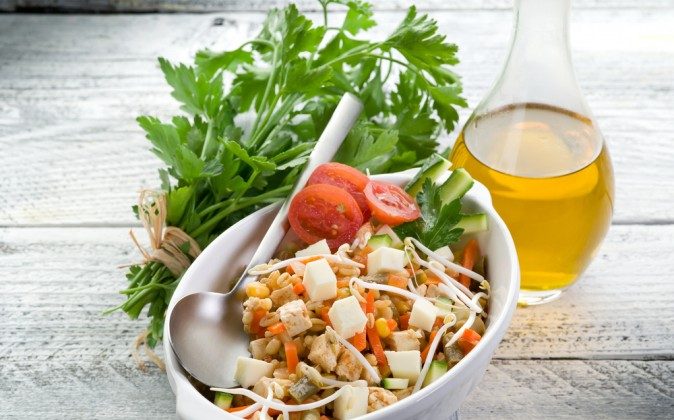 A low-carb vegan diet leads to more weight loss and a better cholesterol profile than a high-carb vegetarian diet, according to a study conducted by researchers from the University of Toronto, St. Michael’s Hospital (Toronto), Boston Children’s Hospital, Harvard Medical School, New York Medical College and Solae LLC, and published in the journal BMJ Open in February 2014.

Prior studies have shown that certain low-carbohydrate diets may assist in weight loss, while others have shown that protein and fat from vegetable sources may lower the risk of heart disease. The current study sought to examine both of these factors together, in the form of a low-carb vegan diet.

Thirty-nine overweight adults with high levels of blood lipids (hyperlipidemia) were recruited from the first phase of the study in which all their meals had been provided for them for a full month, consisting of either a low-carb vegan diet or a high-carb lacto-ovo vegetarian diet. Participants were asked to continue the same eating patterns for six months on their own. At the beginning and end of the study, researchers measured each participant’s weight, blood pressure, blood sugar and blood lipids, including cholesterol and LDL (“bad”) cholesterol.

A vegan diet is one that does not include any animal-derived foods, including flesh, dairy or eggs. A lacto-ovo vegetarian diet does not include flesh (meat, poultry or seafood) but does include eggs and dairy.

There was no significant difference in blood pressure, blood glucose or insulin resistance between the two groups.

“We conclude that a weight loss which reduced carbohydrate in exchange for increased intakes of vegetable sources of protein, such as gluten, soy and nuts, together with vegetable oils offers an opportunity to improve both LDL cholesterol and body weight, both being risk factors for coronary heart diseases,” the researchers wrote.

The researchers did indicate some limitations in their research, suggesting that further studies are needed to confirm the results.

The study involved a small number of total participants and had a high dropout rate in both comparison groups. In addition, first author David J. A. Jenkins and other researcher disclosed that they had served on advisory boards or received money from numerous food companies, including the Almond Council of California, the Canola Council of Canada, the International Tree Nut Council Nutrition Research and Education Foundation, Kellogg’s, the Peanut Institute and Quaker Oats. The study was also partially conducted and funded by Solae LLC, a food and feed company that focuses on soy.

*Image of “salad and tofu” via Shutterstock
TOP NEWS