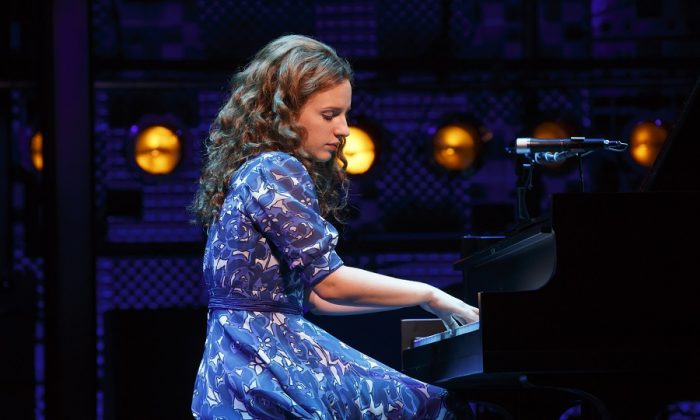 Love and Murder in Broadway Musicals

For sheer entertainment, nothing beats “After Midnight” (at the Brooks Atkinson Theater), a fast-paced 90 minutes evoking the Cotton Club (the Harlem nightspot during the 1920’s and 1930’s). The original club’s band was led by the young Duke Ellington and the Broadway show’s band was hand-picked by Wynton Marsalis, assuring authenticity and swing.

There are 27 musical numbers (mostly by Ellington and Harold Arlen) performed by outstanding singers and dancers. In the past, director/choreographer Warren Carlyle’s work has sometimes been hampered by sluggish scripts. No such problem here. The only spoken words are from Langston Hughes, the jazz-loving poet of the Harlem Renaissance. The charming host (who also sings and dances) is Dule Hill.

The guest artist when the show opened was Fantasia Barrino, who was a winner on American Idol and scored an impressive success on Broadway in “The Color Purple.  She sang the standards “I Can’t Give You Anything But Love,”  “On The Sunny Side of the Street” and “Stormy Weather.” She was even better in Cab Calloway’s silly but delightful “Zaz Zuh Zaz.” From April 1-May 11, the guest artist is Vanessa Williams and from May 13-June 8, Fantasia will return.

Although the guest artists may draw in the crowds, the permanent cast is wonderful. Adriane Lenox is always a delight, whether as a musical comedy performer (e.g., “Kiss Me Kate”) or in a dramatic role like “Doubt.”  When she sings “Women Be Wise,” it’s wise to listen. Carmen Ruby Floyd sings Ellington’s wordless “Creole Love Call.” The dancers are also terrific, with Karine Plantadit in Ellington’s “Black and Tan Fantasy” and the remarkable pair of the acrobatic Virgil J. Gadson and Julius Chisolm (who moves as if he didn’t have any bones in his body.

“A Gentleman’s Guide to Love and Murder” (at the Walter Kerr Theatre) is the best faux-English musical since “The Mystery of Edwin Drood.” It is based on an obscure 1907 novel by Roy Horniman, which was adapted into the classic film comedy, “Kind Hearts and Coronets.” The plot is about an impoverished young man who seeks to inherit a fortune by killing off all the family members who stand in his way. The murderer is played with charm and a firm singing voice by Bryce Pinkham. In a tour de force performance, Jefferson Mays plays all the victims (male and female). Alec Guiness pulled off the feat in the movie, but he didn’t have to sing, which Mays does in a Rex Harrison-ish way.  The book and lyrics are by Robert L. Freedman, the music and lyrics by Steven Lutvak and the show is directed by Darko Tresnjak. They are all talents to follow.

“Beautiful” (at the Stephen Sondheim Theatre) is the musical about the life and career of Carole King. The show covers her life from her high school days when she was a fledgling songwriter to her meeting lyricist Gerry Goffin. They became one of the great songwriting teams and married. Eventually, the marriage broke up because of his cheating. Ultimately, King emerged not only as a songwriter providing words as well as music but became a performer with the mega-hit “Tapestry” album. This would be soap opera territory but Douglas McGrath injects some wit into the script.

McGrath counterpoints the rocky Goffin/King relationship with that of their best friends and songwriting competitors, Barry Mann and Cynthia Weill (played by Jarrod Spector and Anika Larsen), who are a funny pair and also the creators of hits like “You’ve Lost That Loving Feeling.” The main reasons to catch “Beautiful” are Jessie Mueller’s wonderful performance as Carole King as well as to hear all these terrific songs. It is also worth noting that some of the less credible sounding events in the play are actually true. For example, Little Eva, who recorded the hit “Locomotion,” was Goffin and King’s babysitter. Also, the highly touted feminist lyrics of “Will You Still Love Me Tomorrow” and “You Make Me Feel Like a Natural Woman” were penned by Goffin. King supplied the music.