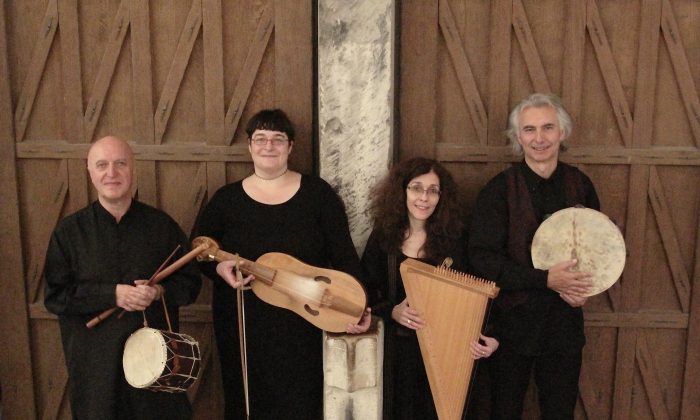 Louise Basbas on Curating Thousands of Years of Music Before 1800

NEW YORK—Early music is a bit like musical archaeology: uncovering dusty Bach scores forgotten on the shelves, unearthing tomes of music scores untouched for centuries and buried in library archives.

“I am always thinking about it,” said Louise Basbas, director of the concert series Music Before 1800 (MB1800) at the Corpus Christi Church in Manhattan. She is always looking for interesting artists who are pioneering new repertoire.

Now in its 42nd year, MB1800 is the longest running early music series in the city, and far from the only one. Interest in early music arose in New York in the 1950s and has grown over the decades. Today, it is regularly programmed around the city, and many series have loyal followers.

This MB1800 season includes music that spans almost 13 centuries, from ninth-century songs about Roman gods and heroes to a newly commissioned work that makes use of the Renaissance period instruments and the ancient Song of Solomon text.

MB1800 presents both vocal and instrumental ensembles, with repertoire generally spanning from medieval to early classical, and largely originating from Europe. Artists tend to specialize in a niche, as this old music requires a lot of scholarship to discover how some early instruments were played and how certain music was performed.

MB1800 works by inviting groups from around the world, mostly from Europe or from New York, and creating a varied lineup of programs for each season.

The next concert is a rare one, Basbas said, performed by a group “I’ve wanted to get here for a long time.”

Ars Longa, from Havana, Cuba, will be performing Latin American baroque music on Feb. 26 at Corpus Christi Church for their New York debut.

The 17th- and 18th-century music and poems were researched with the help of Guatemalan musicologist Omar Morales Abril.

“Their enthusiasm for new repertoire, which is not necessarily familiar to me, is really lovely,” Basbas said.

Also upcoming is a performance on March 16 of late French baroque music performed by virtuosos. Violinist Elizabeth Blumenstock, viola da gamba player Beiliang Zhu, and harpsichordist Aya Hamada will perform Jean-Philippe Rameau’s “Pièces de Clavecin en Concerts” (Five Concertos for the Harpsicord), elaborate pieces that met with immediate success after they were written in 1741 and have been transcribed for many different instruments.

On March 30, the Diderot String Quartet performs both Johann Sebastian Bach’s “The Art of Fugue” and Felix Mendelssohn’s tribute to Bach’s work, the Fugue in E-flat major, and his fugue-filled String Quartet No. 2. For all of Bach’s popularity today, his music had actually fallen into obscurity after his death. In 1829, Mendelssohn’s performance of Bach’s “St. Matthew Passion” rescued that legacy.

The series ends on April 30 with the ensemble Sequentia’s performance of a repertoire of esoteric medieval music. Scholar, singer, and harp player Benjamin Bagby revived and reconstructed ninth- through 12th-century song fragments that medieval monks sang of “the exploits of long abandoned Roman gods and heroes.”

Like many, Basbas came to early music by way of Bach—”well, there’s a cachet about Bach. People want to hear Bach over and over again”—which led her from piano studies to the organ.

When she came to New York and became the music director for the Corpus Christi Church, she noticed a lively landscape with many interesting early music groups in the city, and saw that the church was structurally a fantastic venue for early music—and there were not many small venues like it at the time. She asked if she could hold concerts on Sunday afternoons, when the space was not being used, and the church agreed. So she has been doing so since 1975.

Over the years, the biggest change has been due to The Juilliard School opening up its historical performance department that supports and trains musicians in largely baroque-era repertoire, Basbas said. “The proliferation of young, highly skilled performers has just grown exponentially.”

Young groups are aplenty, but can be hard to schedule if the group is so new that it’s not guaranteed they will be around in two years.

Renaissance vocal ensembles have stuck around, she said, “mostly spearheaded by really fine British ensembles,” like the Tallis Scholars formed in 1973.

And then Medieval music has become rarer, probably because “the specialization and the esoteric nature of medieval music,” Basbas said.

With the MB1800 concert series, Basbas tries to keep a wide variety across the 11 concerts per season. It’s a balance between her love for “the intellectual challenge of new repertoire” and the universal appeal of Bach for any audience.