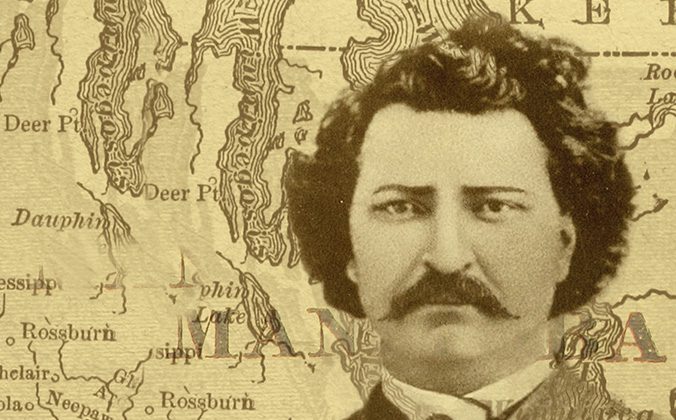 TORONTO—As Canada celebrates its 150th birthday this year, Canadians have the opportunity to reflect on their past, re-evaluate the present, and envision the future.

For baritone James Westman, who is singing the role of John A. Macdonald, Canada’s first prime minister in the opera “Louis Riel,” the restaging of the work comes at a fitting time. It was originally composed in 1967 by Harry Somers to mark Canada’s centenary.

“It’s a very contentious and provocative celebratory work of Canada, of Canadian history. I think it’s a wonderful idea and I think it’s so important to do it on the 150th anniversary of Canada,” Westman says.

Co-produced by the Canadian Opera Company and the National Arts Centre, “Louis Riel” brings to stage the story of the 19th-century leader who stood up for the rights of the Métis people as Canada was expanding westward in the 1880s following Confederation.

Westman says the opera carries many profound lessons about the dangers of racism and prejudice.

“It’s something everyone should see—every young person should see it for sure so they don’t forget the history, which we could easily repeat as a naïve society.”

The opera brings to light the unwillingness of the federal government under Macdonald to acknowledge the rights of the indigenous people, in this case the Métis, people of mixed European and indigenous ancestry.

“Canada is a beautiful country with a beautiful past, there’s no doubt. But there are dark elements, and we have to remember them as well, maybe more, so that our future is beautiful, more beautiful,” says Westman.

“You can’t change the past, but you can definitely teach it, and I think that’s what this opera does.”

Westman cites the example of Germany, where young people are taught extensively about the country’s history, such as the Holocaust. “I think that’s important for us. If we don’t analyze our dark past, it will happen again or it will manifest itself somewhere else,” he says.

Westman says he was initially excited about the opportunity to sing the part of Macdonald, whose vision united Canada into Confederation and built a stronger nation. But the singer, who has some Aboriginal background himself (Seneca-Iroquois heritage from his grandmother) was saddened to learn about Macdonald’ dark side—that he harboured racism and prejudice against Aboriginals and the Métis, the group Louis Riel represented.

“We have to have respect for the certainties that John A. accomplished, but we have to understand by accomplishing those deeds, he neglected and destroyed many people’s lives,” says Westman, noting that the prime minister was quoted as saying indigenous people were savages and difficult to educate.

Westman believes that if Macdonald had handled the demands of Riel and the Métis people differently, he could have gone down in history as one of the world’s greatest leaders. Instead, his refusal to do so left a negative legacy.

In his portrayal of Macdonald, Westman says he wants to help people reflect on their own shortcomings.

“Maybe you, the audience member, might have these prejudices and you need to look inward.  That’s my job as a character,” he says, adding that the power of true art lies in giving people the opportunity to change their own life.

While we cannot change history, we can present it and help people understand it, and this is what this opera does, Westman says.

“We’re dealing with the essential being of humans—that we’re competitive and we’re compassionate. Somewhere along the line we have to really understand one another, and this is what this opera brings in the dynamic of European opera, which is terribly exciting and adventurous,” he says.

The path of reconciliation

While composer Harry Somers did much research in the 1960s to do justice to the confrontation between the camps of Riel and Macdonald, the new production has been expanded under the direction of Peter Hinton, who has set out to incorporate the voices of the Métis people in an innovative manner that goes beyond the constraints of Somers’s work.

“It’s kind of a quilt in the sense that we are all coming together to try to re-establish the truth of history,” says Westman.

As part of his revisions, Hinton changed much of the French language to Michif, the Métis language, added the continuing verses of some of the sacred arias (with permission from the Métis establishment), and changed some of the Métis characters. The most important addition is the inclusion of the Land Assembly, a group composed of mostly Métis and Aboriginal actors who are present throughout the opera, responding to the characters’ actions on stage.

“They’re a silent chorus and they stand for the people for whom the opera has not provided a voice,” says Westman, noting that the assembly is a “beautiful representation of Métis culture.”

In fact, the Métis community has been very involved in the production and Hinton has received mentorship from leaders.

“Louis Riel,” is a celebration of journey and accomplishment, Westman says, something that is important for Canadians to see and understand.

“Art is a wonderful avenue for everyone to learn.”

“Louis Riel” runs April 20 – May 13 at Toronto’s Four Seasons Centre for the Performing Arts and June 15 and 17 at the National Arts Centre in Ottawa.  It will also be presented at the Salle Louis-Fréchette at the Grand Théâtre de Québec on July 30, Aug. 1, and Aug. 3.