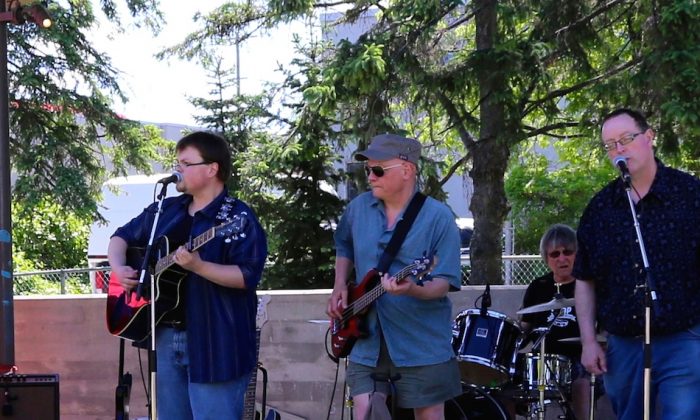 Lost Colt is an Ottawa-based country group whose songs are about real life and real events and they come from the heart. The music can move the listener emotionally, and make them laugh or even get up and shake a leg on the dance floor.

“We get a chance through arts and culture to talk about what matters, and put some context around the issues,” says guitarist/vocalist Bruce Wozny.

All have regular day jobs but would love to play music as a main occupation. Some members perform in other groups, and all of the vocalists write songs.

With this wealth of writers, the group mostly performs music they’ve written and they choose the playlist according to the audience. They try to balance it out so that each member’s songs are represented.

According to bass player Fernihough, “absolutely anything” can inspire him to write a song. He wrote the song “Marriage” based on a scene in the TV show “Battlestar Galactica,” which has got to be a first.

Although Lost Colt lives, records, and plays in Ottawa, they use technology to collaborate with musicians across Canada.

Fernihough co-writes songs with recording artists through Skype. Many of his songs have been recorded and at least three have been nominated for Juno awards.

“What’s happening out there is a lot of people want to have a hand in writing their own songs but don’t have the skill set necessary,” he said.

“So they come to me with ideas and then we sit down and we bounce things back and forth and in a lot of cases they know what they want to say they just don’t know how to get the words out. I will help them find the words they’re looking for and I help them put it together that way.”

“Sun Shower,” a song Fernihough co-wrote with singer-songwriter Donny Parenteau, was on an album that was nominated for the Juno for Best Aboriginal Recording last year, and also nominated for Song of the Year at the Saskatchewan Country Music Awards.

The musicians also use Skype in other ways. Before Parenteau arrived in Ottawa from Alberta for the 2013 Juno awards he sent Fernihough his songs on mp3 so Wozny and Fry could learn them. After a short rehearsal with Parenteau a few weeks later, they were ready to back him during his showcase concerts.

Wozny also plays traditional Celtic music in a group called Rose Trio, which came out of “putting together a little choir during the Christmas season” to play at hospitals. As membership in the group evolved, they eventually focused on playing only Celtic songs.

The group also plays with Irish dancers and continues to play at senior’s residences and local hospitals once a month or more.

“The response [has been] tremendous from the audience,” he says.

About the group’s song-writing, Wozny says, “We’re responding to life around us in a way that might resonate with people, as well as humorous things. At Arts Park, Rick [Fry] sang songs about the humorous side of raising kids.”

“I read somewhere that during unstable times, times of uncertainty, poetry—and song-writing is a kind of poetry—becomes more important. It allows people to actually come to terms with and actually have some connection with what’s going on around them.”

Drummer White plays in Big Soul Project, a community gospel choir that performed with Barbara Streisand at her 2012 concert in Ottawa.