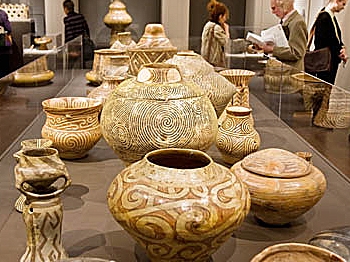 By Christine Lin
Print
NEW YORK—For the first time ever, artifacts from the lost world of Old Europe have come to America. Old Europe encompasses modern-day Romania, Bulgaria, and Moldavia in 5000-3500 B.C.—a civilization that has been largely unknown to the West due to restrictions on excavation during communist years. Now, clay, copper, and gold artifacts from this period are on display in New York University’s Institute for the Study of the Ancient World (ISAW). “The Lost World of Old Europe—The Danube Valley, 5000-3500 BC” features over 250 pottery, jewelry, and religious objects on loan from over 20 museums across Romania, Bulgaria, and Moldavia.

Archaeologists know that the inhabitants of what is called “Old Europe” were a farming people who migrated north from Greece to settle in the middle and lower Danube Valley. They know from objects found in graves that these people had a hierarchical society—there was a small upper class, a middle class, and a vast lower class who spent their days working the fields.

Archaeologists also know that Old Europeans had metallurgy—in fact, of copper artifacts dating earlier than 3500 BC, five tons were recovered from this area—more than what has been found in the rest of the Old World, according to guest curator Dr. David Anthony.

Metallurgy is what set off the development of this society, Anthony said. He theorizes that because metallurgy and ceramics share the same basis in pyrotechnology, it was women who discovered metallurgy. “In most of the prehistoric tribal cultures around the world, ceramics made for household consumption … are made by women—and so it was probably women, female potters, who discovered metallurgy. We normally think of metallurgy as being conducted by large, hairy-chested, sweating men.”

But what archaeologists don’t know is why these people seemingly disappeared as a civilization around 5000 B.C. “Five to six hundred large-scale settlements that were occupied for 200 years were abandoned almost simultaneously. What could lead to the sudden and cataclysmic abandonment of a way of life that was so well established?”

This question is the center of heated debate among the academic community—some say they were taken over by pastoral nomads; others say they it was due to rising sea levels; still others speculate that they took up a nomadic way of life.

Largely Unknown to the West

Until the Iron Curtain fell, it was hard for Western archaeologists to gain access to the Danube Valley, which explains why this ancient culture has largely been skipped over in the Western educational system. Even few academics know about the culture of Old Europe, says Roger Bagnall, ISAW’s director and professor of ancient history. “If you line up a bunch of archaeologists, they wouldn’t like to admit that they had never heard of it,” Bagnall said. “It certainly wasn’t mentioned in my education.”

“It wasn’t until the 1990s that there has been collaborative Western visits, [and] scholars’ research on the collections,” said Anthony, who could only excavate outside the Eastern Bloc in the 70’s. “Yugoslavia was about as close as you could get,” he said.

The spread of ideas had to wait too. Not until recently have “the people [in Eastern Europe] who had done research on this [been] able to talk freely and openly to Western scholars about it. And then it takes a long time to get archaeological material into the public consciousness.”