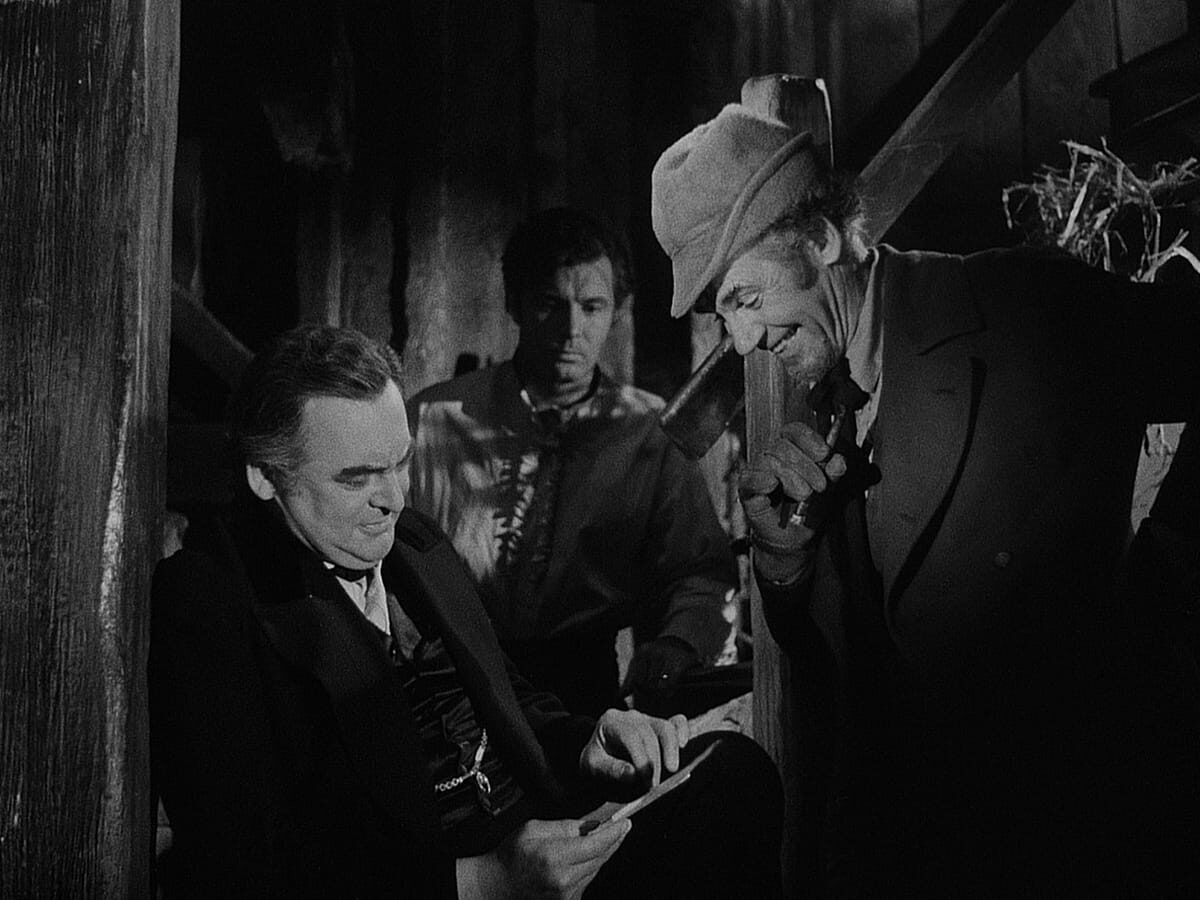 (L–R) Edward Arnold as Daniel Webster, James Craig as Jabez Stone, and Walter Huston as the devil in a scene from 1941's "The Devil and Daniel Webster." (RKO Radio Pictures)
Books

Sometimes we lose ourselves in our faults, vices, and desires, and they come to rule our lives. We are usurped from the throne of our better self and our sinful side rules.

In his short story “The Devil and Daniel Webster,” Stephen Vincent Benét explores these human tendencies.

The hardest and worst luck often befalls man, and this can break him. And so it does to Jabez Stone, for he has the worst luck in the entire village. He owns the poorest livestock and the rockiest fields. His family faces constant struggles: “If he plants corn, he gets borers; if he plants potatoes, he gets blight.”

Such terrible luck pushes Stone to the breaking point. Lost in desperation, and with the desire for a little good fortune, he sells his soul to the devil.

Stone does not immediately regret his choice, for the devil provides him with the best luck in the entire community. He comes to have the fattest livestock, the most plentiful crops, and the healthiest family. He even successfully runs for selectman, a New England town officer.

But it comes at a price. Every year, the devil comes to take Stone’s bloody signature, and every year Stone grows more tired. He tires of being lost and consumed by this desire for good luck. He regrets selling his soul and wants to free himself from this wicked bargain. However, he cannot free himself on his own.

Sometimes we need someone else to remind us of who we are and to help us find ourselves again. Stone seeks the help of his neighbor, the great Daniel Webster. Webster is a lawyer of such talent and power that “when he stands up to speak, stars and stripes come right out in the sky.” Such is the man that Stone needs to help him fight against the devil.

When the devil arrives to take Stone, claiming Stone as his property, Webster challenges him. Webster and the devil debate, but the devil proves a formidable opponent. As the devil backs Webster against a wall, Stone’s soul seems evermore lost.

In an act of determination, Webster cries: “I stand on the Constitution! I demand a trial for my client!” He tells the devil that, as long as the judge and jury are American, the devil can choose whomever he desires to pass judgment.

The devil consents and chooses some of the most criminal men in American history to be judge and jury. These chosen men are already dead and damned: Walter Butler, Simon Girty, King Philip, Governor Dale, Morton of Merry Mount, the bloody pirate Teach (Blackbeard), Reverend John Smeet, and (acting as judge) Justice Hathorne.

The trial begins. With the judge, jury, and prosecutor all against him, Webster “begins to heat, like the iron in the forge.” When it comes to his turn to speak, Webster plans to “flay [the devil] with every trick known to the law, and the judge and jury too.”

As he is about to speak, Webster notices that the hellish fire in the eyes of the judge, jury, and devil burns more fiercely than before. He realizes that he has lost himself in his anger, so much so that “if he fights them with their own weapons, he’d fall into their power,” and he would lose and be lost.

Webster calms down, finds himself again, and begins with the utmost eloquence. He shows that Jabez Stone is a man. He shows that “there is sadness in being a man, but it is a proud thing too.” He talks of the sorrow, sin, and evil of man. Yet, despite these evils, he shows the goodness, glories, and pleasures of man. He meditates on “the things that make a country a country, and a man a man.”

As Eleanor Sickels says in her article “Stephen Vincent Benét,” by showing the goodness, pride, and glory in men, Webster “interprets the people to themselves.” He finds not only himself but also Jabez Stone and all men. In that instant, even those damned men feel their humanity again. Webster wins the trial, saves Stone, and dispels the devil.

Benét shows that men are sinful—there is no hiding that—but men are also glorious, good, and temperate. They can make deals with the devil, but they can also overcome, banish, and beat him.

By focusing on our faults, vices, and desires, we perpetuate those sinful tendencies. To combat the devil, we must look at the good in man and the good in ourselves so that we can rise above our failings and fight for goodness.