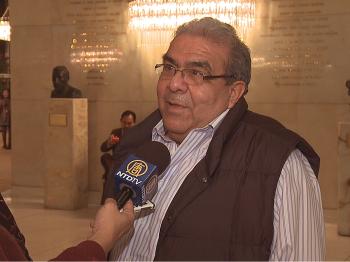 Mrs. Hernandez said, “I like it very much, because I like the culture and the history, the costumes, the coloring. Everything is beautiful.” She is a retired teacher and would have liked to share the experience with her students. She said, "If I were still teaching, I would probably talk about it and bring it into social studies. It would be beautiful."

Mr. Hernandez said, “I like the costumes and the colors. I like the dances, the way they express themselves, the fluidity of the dancers. They make it look effortless.” He also enjoyed the athleticism and skill of the dancers.

The New York-based group has animated digital backdrops, which are integrated with the live action. Mr. Hernandez noted the way the two components worked together. “The visual between what's showing on the screen and how they bring it together with the dancers on the stage—I think it really works very nicely,” he continued.

Mr. Hernandez said he and his wife have a strong affinity for Chinese culture, so strong that they seek out old movies about the ancient dynasties. “This is cultural based. It really leaps out at you. They mix the stories of the old times and demonstrate how they effectively present it. I like that very much," he said. For some time, Mr. and Mrs. Hernandez have cared about traditional Chinese culture. "We've liked it quite a bit. We were looking forward to coming to the show."

Seeing Shen Yun was a chance to experience something rarely seen, according to Mr. Hernandez. “I think the fact that the Chinese culture has been somewhat hidden a little bit, and now we get to see what it's like—I like it very much.”

Shen Yun has three dance companies and three orchestras. While one company performs 10 shows in Los Angeles until Feb. 14, the other Shen Yun companies will be performing in St. Louis and New York.