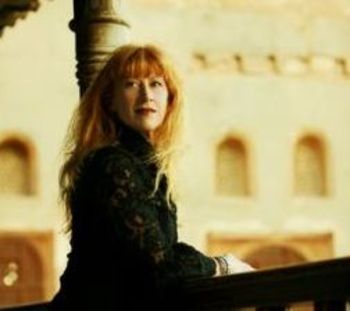 Whoever truly desires to experience the essence of music will need to take time for it, stepping out of the mundane existence of everyday life, perhaps into a different time and place. Today, there are too few musicians who view their profession as a mission to tell people of other times and places in history, but one such artist is Loreena McKennitt. Her style has been self-described as “eclectic Celtic,” and of late, “more of an expression of a hybrid form of world music.”

While of Scot/Irish decent, it was only until the late 1970's that she began to explore Celtic music in depth. Her elaborate historical research plays an important role in her musical offerings and she fuses the cultures in a unique way, incorporating a panoply of exotic instruments, such as the oud, kanoun, uilleann pipes, bazouki, nyckelharpa, tabla and the hurdy gurdy, while her smooth, mezzo soprano voice carries the poetry of her lyrics, evocative of Celtic troubadour. The Epoch Times German edition caught up with her for this insightful interview.

ET: It’s been quite some time now since you were selling your recordings from your kitchen table, and playing street gigs, [known as “busking”] when you also sold copies of your first recording, Elemental [1985]. Do you recall that time well?

Loreena: Oh—yeah—I remember it well. That studio, where we recorded Elemental, is not far from where I live [in Stratford, Ontario, Canada]. Or perhaps you mean, whether I remember when things were so small and simple? Yes, I do… but you know, life moves on. Sometimes it expands, sometimes it contracts: life is a living and dynamic organism.

I like to be able to incorporate a wide range of things. In performance, for example, it’s nice to have some of the large and more complex songs to play with the other musicians. But it’s also quite nice to be able to sing a few intimate solo ballads, keeping it simple.

ET: On your third album, Parallel Dreams, [1989] there is an instrumental track, “Huron Beltane Fire Dance.” This song is also an encore from The Nights from the Alhambra [2007]. What is the inspiration behind the fusion of Native American and Celtic culture?

Loreena: I think it was about reflecting at that time, (around 1989) on various fire-related ceremonies from different cultures. I live in southern Ontario, so we live near Lake Huron, and we have a variety of indigenous people that live close by. I like looking at different cultures and traditions and seeing what similarities there might be, and in particular what the significance of their ceremonies are. So in this particular situation, I was just reflecting on the Celts and the Hurons—you know, it’s not academic, it’s a form of thought travel—like writing thrillers—a break from historical things, a reflection on two different cultures…

ET: And what do you think about Native culture?

Loreena: I think it’s very relevant. Talking about native peoples, there are many different tribes and nations, and they have their own rituals, but the ethos at the bottom of it, as I understand is – there is a lot that is uncertain, that can’t be defined, but it’s very integrated with the natural world, and that is something I sincerely appreciate.

ET: Is it somewhat connected with the rural area in southern Ontario?

Loreena: I suppose it could be looked at like that. I continue to live on a farm in southern Ontario; I continue to be a very rural person. And I always grow my own garden, a part of my personal life in which I am connected to the land. So I’d say that even though my career has become quite a bit larger and involved, and I travel around the world, I still feel that I call southern Ontario home, and that I appreciate simpler things, certainly in terms of the natural world.

ET: Your latest project, which follows on your album, An Ancient Muse [2006] is a DVD-set, Nights from the Alhambra. What is the essential spirit in this live concert?

Loreena: While doing research for The Mask & the Mirror, [1994] my research took me to Spain, and the inspiration was initially the result of the discovery that there were Celts in the northwest corner of Spain, in Galitia. At that time, I knew very little about Spanish history, as well as Celtic history.

As I experienced the country of Spain, I was led off into a tangle of scenes and ideas that weren’t overtly connected to Celtic history. However, I’ve always approached my music as a kind of almost free-form travel writing, where one launches onto a subject and it takes you to places, and sometimes you go off to places you can identify with, but then it takes you to places you could never have known.

And when one is spending time focussing on Spanish history, of course, it’s impossible to do that, without coming across the Alhambra [a palace and fortress built in the 1300s, considered one of the finest examples of Moorish architecture in the world.] And I felt that there was something about the period of time the Alhambra came from, with perhaps some things to learn from. Being such an exceptional historical sight, we thought it would be appropriate to perform there. (We had looked at a wide variety of historical sites.) I wanted to perform someplace that had at least some remote connection to my travels and research. And the Alhambra was the place we settled on. [Her album, Nights from the Alhambra, became the inspiration for the PBS TV concert special of the same title.]

But I also particularly love travelling, and I love to experience adventures—more than just to go on holidays. So considering research for Parallel Dreams, [1989] I even travelled to Mongolia and China. I think that there are things that you discover about yourself when you travel alone at times, and sometimes to very remote places: I think you can learn a lot. It’s not always comfortable, stable or even predictable, but I’d say it’s always a good challenge, if you’re thinking in a wholesome way.

ET: After the world tour of The Book of Secrets, [1997] you travelled about China—riding a bicycle—that’s quite an accomplishment!

Loreena: Yes—that was a truly long way! So much work leading out of it … At that time, I was starting to develop an appreciation for the Celts, and the potential theme of a possible influence from the East.

ET: China is the home of a 5000-year-old culture, but in this contemporary period, under a communist dictatorship, we think of the invasion of Tibet, the Cultural Revolution, the Student Massacre of Tiananmen Square, and the ongoing persecution of Falun Gong. With the 2008 Olympic Games in Beijing, there’s such a strong parallel with the 1936 Games in Hitler’s Berlin. What do you think about the present-day China, and the spirit of the Olympic Games?

Loreena: You know, sometimes, just because you are well-known, doesn’t mean you will see your next birthday … [she laughs] … I’m very interested in Chinese history and how it relates to the Celts. That’s something I’m comfortable speaking about…I mean I think it’s safe to say—overall—the world is a very complex place, and we’re trying to navigate our way through very special challenges that exist at this time. The topic of human rights, of course, is one of these complex challenges. But I would say in general, I think it’s dangerous for anyone to make assumptions, because I think situations are structured, complicated and sometimes beyond the imagination. But circumstances are often a result of history that we’ve come from.

ET: On the webpage of The Book of Secrets, I found a quote from the ancient Chinese Taoist, Lao Tsu, which you used in Nights from the Alhambra: “A good traveller has no fixed plans, and is not intent on arriving.”

ET: How do you feel about people referring to your music as “world music?”

Loreena: I think artists don’t really mind what their music is called; they’re primarily concerned with whether others like it or not, and whether people can even find music that they can relate to. I think the categorization of music has been initiated by the industry to help people in a retail environment, whether it’s virtual or it’s a conventional kind of environment, or it is charts, and so on… So, music may be categorized by default. That being said, I think that my music utilizes a wide range of instruments outside of any particular cultural group. I think it can be seen as one interpretation of world music. For some people, world music means a more pure and authentic form, and for other people it represents a fusion. If the term “world music” represents a fusion, then in my case, that’s suitable.

The internationally acclaimed composer and Canadian folk singer/instrumentalist Loreena McKennitt, nearly does it all—she is the manager, producer and director of the successful international record company, "Quinlan Road," located in Stratford, Ontario, Canada. Her song, “The Mummers’ Dance, became a U.S. radio station chart hit in 1998, helping to launch her career. She has since sold thirteen million albums, with gold, platinum and multi-platinum sales awards in fifteen countries. She has received numerous distinguished awards, having twice received the Juno Award, in the category of "Best Roots/Traditional Album." (This prestigious award, equivalent to the Grammy, is presented annually to Canadian musical artists and bands, acknowledging their artistic and technical achievements.) Her music has been featured in film scores and other media venues, such as TV and stage.

Her artistic and financial success has enabled her to lend generous support to a variety of charitable institutions, such as The Cook-Rees Memorial Foundation for Water Search and Safety, The Falstaff Family Centre, and the Three Oaks Foundation, which provides financial assistance to an array of environmental, historical and social groups.