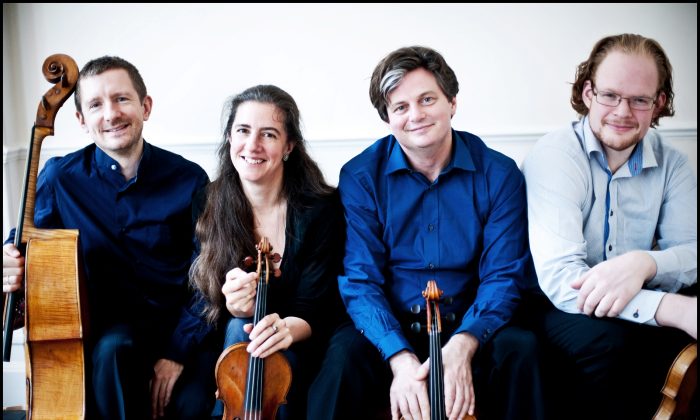 The London Haydn Quartet, one of the world’s leading period instrument string quartets, continues to inspire audiences with a passion for some of the most beautiful music ever composed. This month, the U.K.-based group is touring Canada, bringing their rich program dedicated to Haydn, Mozart, and Beethoven to Canadian audiences.

The quartet uses 18th-century bows and gut strings, which were the standard in music until the 1940s. In addition, the musicians don’t use shoulder or chinrests for the violins or viola, nor is the cello supported on a spike.

“The more we explored this music and its language, the more we were drawn to the world of period instruments,” says Catherine Manson, the group’s first violinist.

“There is a real connection between musical meaning and the way the sound is produced, and we find much more of a connection with the music when it is allowed to inhabit its own native sound world.”

Eric Hoeprich, one of the world’s leading early clarinet specialists, joins them for the Canadian tour, playing a basset clarinet he made himself—the kind that Mozart composed for.

“We love the more intimate, speaking quality that the period instruments have,” Manson says.

Haydn is the supreme master of the string quartet and every single one of his quartets is a work of genius.
— First violinist Catherine Manson

The quartet was formed in 2000 when the musicians discovered a mutual love of Haydn.

“Haydn is the supreme master of the string quartet and every single one of his quartets is a work of genius,” says Manson.

The group set out to play all of Haydn’s string quartets—over 60 of them, most of which are rarely played.

“We wanted to redress the balance and play all of them, so for years we played only Haydn and we are now halfway through recording the complete set on the Hyperion label,” Manson explains.

“Having focused on [Haydn’s] quartets for our first few years, we felt that coming to Mozart and Beethoven’s works was in a way similar to their experience of knowing Haydn’s incredible output and having to think of new ways of expressing themselves. Often one also finds pieces they seem to have written in response to Haydn,” Manson says.

“Music is an essential language for all of us at all ages, and as with every language, the earlier you start to speak it the more fluent you become,” Manson says.

Music, she adds, goes beyond the mere listening experience.

“For the deepest kind of communication sometimes we need to turn to another medium to find a means of expression, and music is one of the best languages for this purpose. A great piece of music will transcend our experience of time and space and enable us to understand things we could never comprehend another way,” she says.

“To spend one’s life immersed in this investigation is one of the greatest privileges I can imagine.”

The London Haydn Quartet will next perform on Jan. 14 as part of the Ottawa International Chamber Music Festival, then in Toronto on Jan. 17 with Mooredale Concerts. For more information, visit: http://londonhaydnquartet.co.uk/