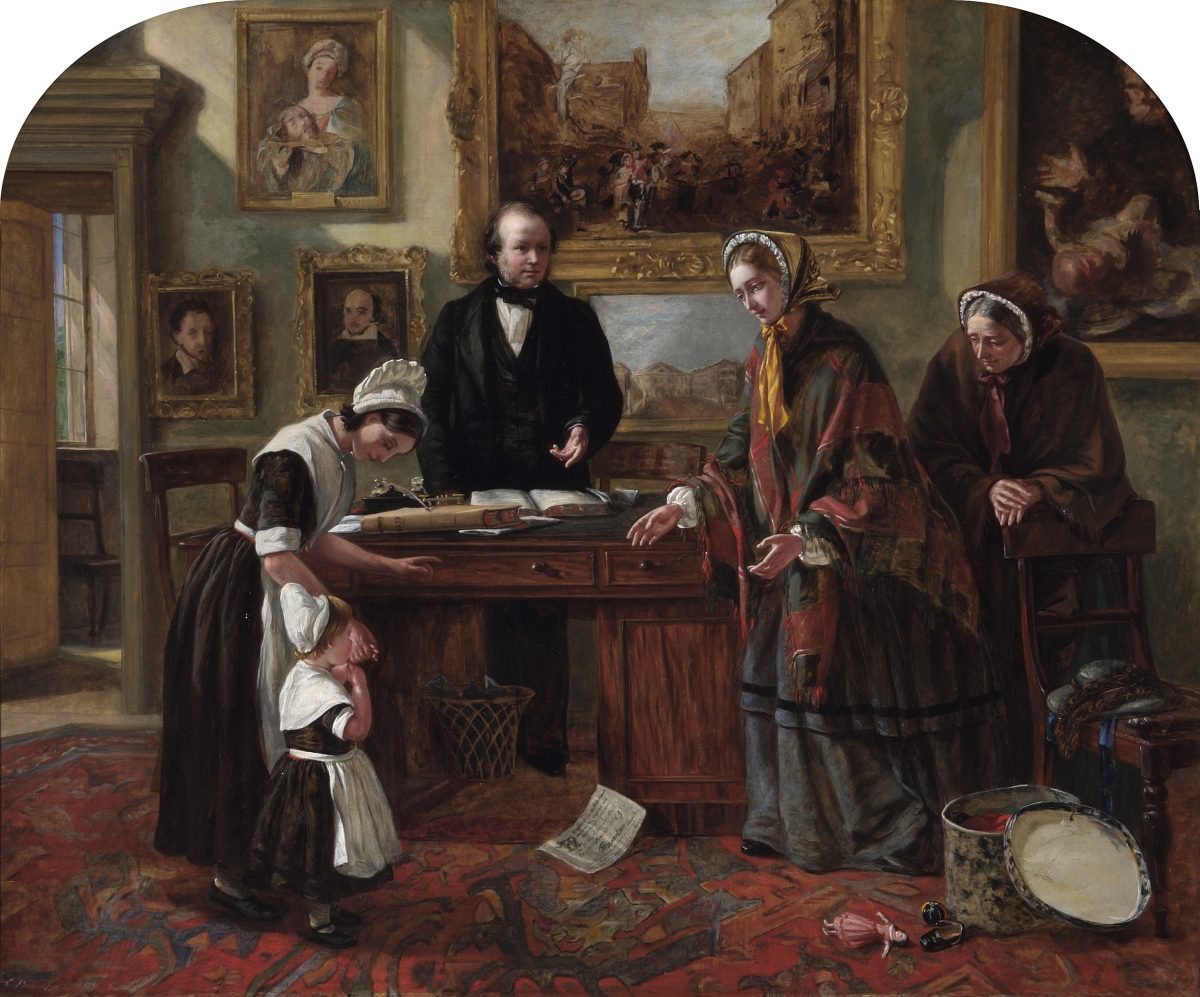 An art exhibition showing the plight of Victorian women who had children out of wedlock has opened in London. Called The Fallen Woman, it is being held at the Foundling Museum which is built on the site of the Foundling Hospital, a charity set up in 1739 originally to care for abandoned babies.

On show are more than 30 works, including paintings, engravings and, most poignantly, original written records that tell the stories of women who were applying to the Foundling Hospital to look after their babies. The latter give a glimpse of the reality of the so-called fallen woman.

In one document from 1857, Susannah Jane Keys, a milliner, explains how she was raped by a visitor to the family home and became pregnant. Her father, in a supporting letter to the Foundling Hospital, talks of his and his wife’s ‘continual cup of bitterness’ since hearing of their daughter’s predicament. Keys’ baby was accepted by the hospital. Many others were not.

Britain in the 19th century was fast becoming an urban, industrial economy. An affluent and increasingly powerful middle class was on the rise and it championed hard work, thrift, self-help, and moral respectability. The Victorians valued virtue, particularly in women.

The lives of Victorian middle class women revolved around being a dutiful daughter, wife, and mother and this ideal is best illustrated in the exhibition by George Smith’s “Evenings at Home”, a detailed and realistic oil painting showing a middle class family at home. The mother is centre-stage surrounded by her seven demure, happy children.

In sharp contrast is a painting by Richard Redgrave called “The Outcast” which depicts a very different family. Here an angry father is throwing out his daughter and her illegitimate baby into the cold, snowy night. Despite the distress and pleas of his other four children, the man is unmoved. There is no forgiveness for this woman who has fallen from respectability.

The ‘fallen’ woman was a popular subject in Victorian art, literature and the media of the Victorian age, constantly reminding women of the consequences of sexual encounters outside of marriage, typically homelessness, destitution, and finally suicide. These women were not prostitutes. Rather they had been seduced or raped and become pregnant, and it was their responsibility, their shame, their downfall. At this time, men were never to blame.

Several of the paintings at the exhibition show the anguish of the women and their suicide by drowning, another recurring theme used by artists of the day. George Frederic Watts’ “Found Drowned”, portrays a young woman washed up on the shores of the Thames but here the artist shows some compassion, a single star in the night sky offering the hope of redemption.

By the middle of the 19th century, the Foundling Hospital too was focusing on trying to restore the ‘fallen’ woman’s respectability. It changed its policy and would only consider caring for the babies of first-time mothers who had previously been of good repute. The idea was that these women would return to the workplace and, in time, possibly reclaim their children.

An instance of this is shown in the final painting of the exhibition, “The Foundling Restored to Its Mother” by Emma Brownlow, the daughter of John Brownlow, Secretary of the Foundling Hospital, who can be seen behind his desk. Yet this was a rare occurrence, only about 3 percent of children were returned to their mothers, although they were rarely forgotten.

“In the archives I found bundles and bundles of mothers’ letters written on scraps of paper to Mr Brownlow enquiring about their babies,” said Jessica Sheetz-Nguyen, Professor of History at the University of Central Oklahoma in the US who has extensively researched the Foundling Hospital’s archives. “I believe that these children lived on in the hearts of their mothers. While the mothers had been forced to make a very difficult choice, they knew that they were doing the best for their child, that they would be taken care of and given an education.”

The Fallen Woman exhibition was part funded though Art Happens, the crowdfunder set up last year by the Art Fund charity to help UK museums and galleries raise money for creative projects. Although donations of more than £25,000 were received and exceeded the target, Caro Howell, Director of the Foundling Museum warned, “It is important for an organization the size of the Foundling to consider the resource implications of running a crowdfunding campaign, because they are sizeable. However, this is where the support of the Art Fund was so invaluable.  I don’t think we would have felt confident in our ability to reach our target were it not for their expertise and their ability to help mobilize support.”

The Fallen Woman is at The Foundling Museum, 40 Brunswick Square, London WC1N 1AZ and runs until January 3rd, 2016.