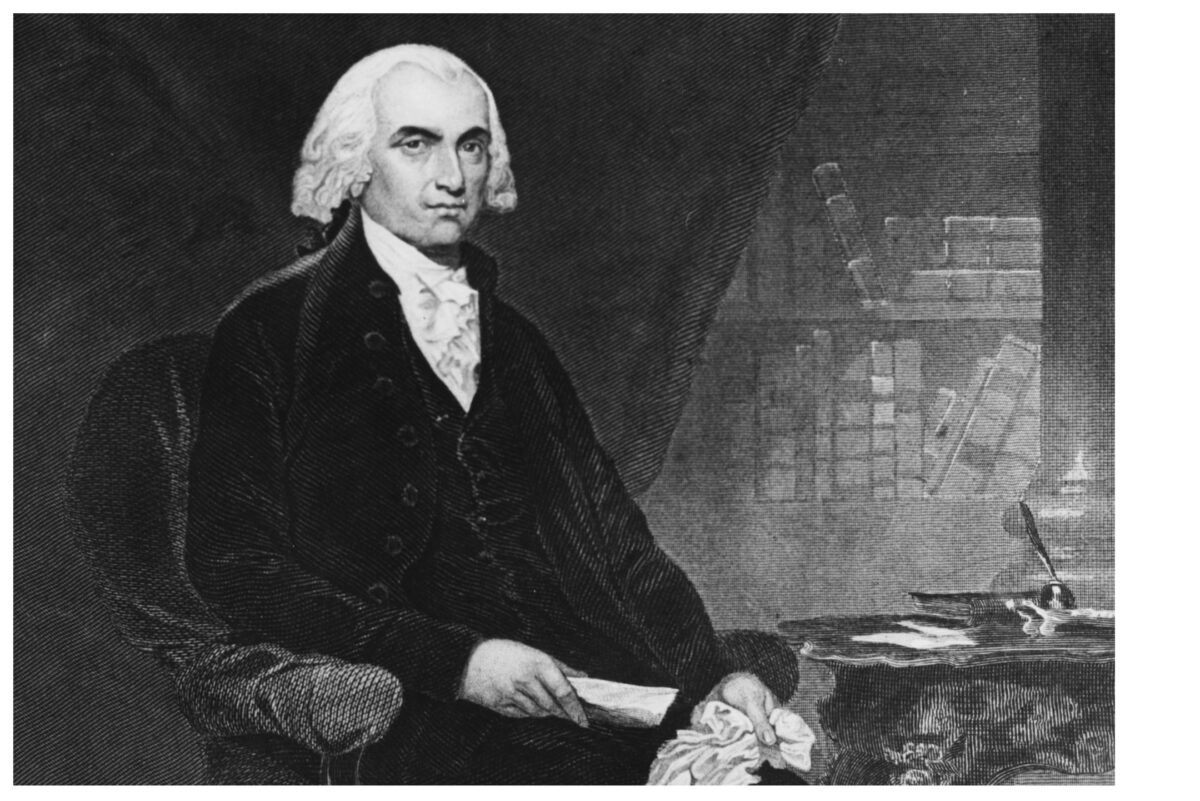 Little Big Man: Some Lessons From ‘The Father of the Constitution’

He was often plagued by ill health, including what were then known as bilious fevers and a mild form of possible epilepsy. His frailty prevented him from serving in the Continental Army, and years later, as president, he exchanged the muggy summer heat of Washington for the curative airs of Montpelier, his family home in central Virginia. Though he lived to 85, considered then and now a ripe old age, the principal framer of our Constitution himself suffered from a “poor constitution,” as his contemporaries might say.

Nor did his demeanor attract attention. He was often timid in large gatherings and was a poor public speaker, hindered by a feeble voice in an age that treasured oratory. Patrick Henry might bring roars of approval from a crowd, but Madison spoke so softly at the Constitutional Convention of 1787 that delegates had to scoot their chairs closer to hear him.

Even his height worked against him. Compared to George Washington or Thomas Jefferson, both of whom stood well over 6 feet tall, Madison was about 5 feet, 5 inches tall. He was America’s shortest president, and his height made him the butt of jokes, earning him nicknames such as “Little Jemmy” and “His Little Majesty.” As one person observed, Madison was “no bigger than half a piece of soap.”

Gifts to a Nation

Though some confused Americans credit Jefferson, author of the Declaration of Independence, as the Father of the Constitution, it is, of course, Madison who wears this badge of honor.

And rightly so. It was Madison who had spent years prior to the Constitutional Convention reading history and political science. It was Madison who assiduously took notes every day of the Convention’s meetings and then closely studied them in the evenings. It was he who envisioned a republican form of government with a system of checks and balances distributed among the branches of that government. And when the new Constitution was sent to the states for ratification, it was Madison who wrote 29 of the 85 articles in “The Federalist Papers” defending and promoting this document.

Madison was also the principal author of the Bill of Rights, those amendments to the Constitution listing such natural liberties as freedom of speech and religion. These remain the heart of the American experiment and are the watermark of American exceptionalism.

In Federalist No. 14, Madison wrote of Americans and their leaders that “they accomplished a revolution which has no parallel in the annals of human society.” The same might be said of Madison’s Constitution.

For these gifts, we must be grateful. Whether we realize it or not, our Constitution has shaped the lives of each one of us. But Madison’s lessons for us don’t end there. If we examine some other aspects of his life, we find tips on how we ourselves might live more fully.

“All I have been in my life I owe largely to that man,” Madison later wrote of Donald Robertson.

Robertson was the principal teacher at the Innes school, to which Madison was sent at the age of 11, about 70 miles from Montpelier. There, this graduate of Scotland’s Edinburgh University educated the boy in math, science, Latin, Greek, and French. Later, Madison was instructed at home by the young Thomas Martin, a graduate of what is now Princeton University. Madison attended this college as well, entering as a second-year student because of his excellent preparation.

As a result of this education, Madison remained a lifelong reader and student. But he also became an advocate for more educational opportunities, writing in August 1822 to Kentucky’s Lt. Gov. W.T. Barry, “What spectacle can be more edifying or more seasonable, than that of Liberty and Learning, each leaning on the other for their mutual and surest support?” At the same time, he was working alongside Jefferson to establish the University of Virginia in Charlottesville and would continue his involvement as university rector after Jefferson’s death in 1826.

Madison’s recognition of the important link between learning and liberty should inspire parents and teachers to make this same connection.

The 50-year friendship between Madison and Jefferson had enormous repercussions on the formation and future of America.

The deep bond between Madison and Jefferson is unlike that of any other two presidents in our history. They made an odd couple physically—Jefferson was 6 feet, 2 inches tall—but that difference mattered not a whit. Over the course of a half-century, these friends exchanged books and ideas, not all of them political in nature, and delighted in conversation whenever they were together.

The camaraderie of these two Founding Fathers should remind our young people, and us for that matter, to choose our friends wisely and keep them close.

When he lost the presidential race of 1808 to Madison, South Carolina’s Charles Pinckney noted that he had lost to both Mr. and Mrs. Madison, and might have had a better chance if he had faced Mr. Madison alone.

Madison was 43 when he met 26-year-old widow Dolley Payne. He was instantly smitten, but after a proposal of marriage, Dolley took three months before answering yes. For the next 42 years, until Madison’s death, they were the picture of a happy, compatible couple.

In many ways, they were proof that opposites attract. Dolley was outgoing, loved entertaining and arranging large parties, and in spite of her earlier Quakerism, enjoyed wearing jewelry, her signature turbans, and fine gowns, some of which she ordered from Europe. Madison was retiring, intimate only with those whom he knew well, and most often dressed in black.

Each recognized the strengths that these differences brought to their marriage and to their public life. Nor was Pinckney far off the mark in his backhanded compliment about the influence of Dolley, whose social ease and finesse set a tone of graciousness in White House entertainment that has lasted to our present day.

As we might expect from such an unassuming personality, Madison rightly struck those around him as a gentleman who kept his ego in check. Despite being the major force behind the Constitution, for example, he once stated: “You give me a credit to which I have no claim in calling me ‘the writer of the Constitution of the United States.’ This was not, like the fabled Goddess of Wisdom, the offspring of a single brain. It ought to be regarded as the work of many heads and many hands.”

Like some of the other Founding Fathers, including Washington and Jefferson, Madison owned slaves, a practice which we moderns rightly condemn.

Yet some people would use this evil, which shamed Madison himself, to blot out all of his other achievements. This July, for example, the New York Post reported that the directors and staff of Madison’s Montpelier had excluded most of his contributions to our nation from its exhibits, focusing instead on the slavery of his day and the perceived racism of our own. Their tours of the house and grounds left many visitors confused or angered by their politically correct guides and by the banishment of Madison himself from his own home.

After these protests, Montpelier announced that it would offer a month-long “Constitution Day” celebration centered on the Sept. 17 anniversary of that document’s adoption.

Whether this celebration was already in the works, as claimed by a representative of Montpelier, or was instead a reaction to the public outcry is unclear. Whatever the case, what these iconoclasts forget as they seek to denigrate or even erase our past is that Madison doesn’t just live on in Montpelier, or in the towns named after him, or in the statues erected in his memory. His greatest memorial is found in the world’s oldest written constitution. If the cancel culture movement ever destroys that shrine of our freedoms, then the republic it established will vanish as well.

As Madison wrote near the end of his life: “The advice nearest to my heart and deepest in my convictions is that the Union of the States be cherished and perpetuated. Let the open enemy to it be regarded as a Pandora with her box opened; and the disguised one, as the Serpent creeping with his deadly wiles into Paradise.”

Preserve Madison’s greatest monument, the Constitution, and we preserve what Jefferson’s Declaration of Independence called our unalienable rights of “Life, Liberty and the pursuit of Happiness.”