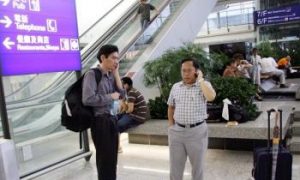 Seeing Shen Yun for the first time, Mr. Huang expressed his admiration for the performance. He said he was impressed with the successful blending of Chinese and Western instruments in the Shen Yun Orchestra, which he said accompanied the Chinese dance wonderfully. He exclaimed, “[It was] really marvelous!"

As well as being president of a Lions Club, Mr. Huang is also a board member of the Tainan Culture Foundation. He said, “Next year I would like to ask for Tainan Cultural Center’s permission to let Shen Yun present more shows.”

Mr. Huang enjoyed all the programs. He said, “I watched each program carefully and thought it was really incredible that Shen Yun combined modern technology, ancient dance, and Western instruments with such perfection. I also found the performance suitably representing Chinese culture.

"I have been to many shows but the shows with good quality like Shen Yun are rarely found. I will promote Shen Yun to more people and encourage them to see the show.”

Having seen Shen Yun for two consecutive years, Mrs. Huang said that Shen Yun’s dynamic backdrops were impressive and beautiful, and each program touched her in a different way. She said, “After seeing Shen Yun’s performance, I enlightened that we should cherish our blessings and reach out and give a helping hand to others as much as we can. And we should always fill our hearts with gratitude."