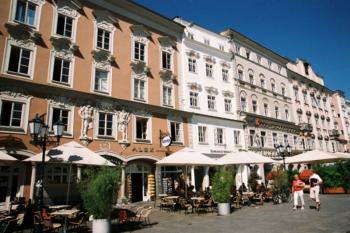 "Zero Hour Zero"—2008 into 2009. For months now, the people of Linz have been feverishly anticipating when the clock on the church tower eventually signals the arrival of January 1, 2009, starting the year of the city's designation as Cultural Metropolis. Linz, situated in Upper Austria and the Lithuanian capital, Vilnius, both share the honors for one year to become cultural host cities for all of Europe.

At one time, Linz had been the hotbed of European cultural politics—when the city was the capital for the "Oberdonau Gau" (Upper Danube Region).  Hitler had attended grade school there, and raised it to the status of "The Fuehrer's Cultural Capital". The plan had been to amass one of the greatest collections of paintings in the world, to be displayed in Hitler's former living quarters. But fortunately, things developed otherwise.

Is it the task of a European cultural Mecca to erase or hide negative images from that era? Not so. Because Linz had long ago dealt with the shadows of her ignoble past and looked at them critically, there is nothing to hide, but much to show off. The city had managed long ago to overcome and shed her image of an industrial base and has established a reputation for cultural diversity and an invigorating life style.

People will immediately sense the quality of life here when strolling along Landstrasse with her tasteful shops and stores, stylish restaurants and neatly preserved churches. Standing on "Hauptplatz," (Main Square) that features the baroque Trinity Pillar, one has a grand view of the renovated building facades where people can sit comfortably in the shade and enjoy a cool drink or an Italian ice cream.

Close by are shaded beer gardens and exquisite cafes that serve the renowned "Linzer Torte" prepared according to a three-hundred-year-old recipe. [Linzer Torte is based on a rich, sweet open-faced butter dough, enlivened with ground almonds or hazelnuts, layered with either raspberry or apricot preserves, topped with a lattice crust and baked until light golden brown] "How do you like our city?" some proud people ask visitors, but it is more of a rhetorical question, because the answer is obvious.

The almost completed renovations have transformed the old part of town into a jewelry box: St. Mary's Cathedral, Mozart's home, the Castle and the Jesuit Church – all are ready and await the anticipated stream of visitors. at the St. Florian Abbey (Bernd Kregel)”]

Looking at the traditional Catholic lifestyle and architecture on which the city now functions, it is scarcely evident and difficult to imagine that during the Reformation Linz had been a Protestant town. Inscribed tablets outside the Martin Luther Church close to Landstrasse are reminders of that era. But the counter-Reformation took hold of the city by the Danube and showed the citizenry via the rulers' baroque-inspired building facades which belief system to be the correct one to follow from then on.

Ferreting out architectural relics is enticing, but also tiring. A contrast to the old town's confines can be found close by the Main Square, in the vicinity of Nibelungen Bridge. Tired eyes behold shady green between the Lentos Art Museum and the Bruckner House Concert Hall. The gardens are adorned with modern works of art and the expanse of lawns lead the eye to an unobstructed view of the Danube, all the way to the Poestlingsberg and the Pilgrimage Basilica. The Poestlingsberg was given the name "Haus Berg," meaning "home mountain," part of the incomparable view over all of Linz. And Linz wants to be seen and wishes to be Europe's Display Window for Europe's Diversity in 2009.

How is this to be accomplished? The Linz planners have extended invitations to twelve new EU member nations, calling the program "Dozen Europe," and expect representatives to visit from Bulgaria to Cyprus.  The visitors will hopefully take turns in leaving their calling cards throughout the coming year.

No musical involvement has been omitted, even the churches in town have joined in. National and international organ virtuosi will bring the queen of instruments to life between Easter and the fall of next year, and thus demonstrate their resolve to have people experience the inside of the churches as an acoustic medium.And there is more: a trumpeter will ply his craft from the city church tower and thus resurrect the forgotten tradition of trumpet music signals emanating from the church.

But what would Linz be without the rapidly growing three-year-old musical program "Cloud of Sound," which is celebrated in conjunction with the Bruckner Festival? Or the "Ars Electronica" event or the lavishly staged Linz Festival that has been the city's calling card for many years already?

Even travelling beyond the city borders is a worthwhile endeavor. A mere few kilometers away is St. Florian's Abbey, sitting in all its baroque elegance on a hill above its namesake village. It is home to 40 Augustinian monks who serve the surrounding area as spiritual advisors/priests/brothers. The lavishly and artistically decorated Emperor's Hall is a reminder that Emperor Florian had not minded the long trip to Florian Abbey to thank the namesake patron, primarily for repelling the Turkish Army in 1683, as Islamic forces were uncomfortably close to the area, first to overtake Vienna, and then the rest of Christian Europe.

To satisfy highest imperial demands, even the church was furnished in new baroque splendor and supplied with an organ that soon became renowned not only for its outstanding tonal qualities, but also because no less a person an composer Anton Bruckner served the Lord by performing on the magnificent instrument. After his death, the officials honored his wish to be buried beneath "his" instrument. It is a touching moment for those who venture into the chamber beneath and spend a moment or two next to the composer's metal casket, a fitting place to once again sense the harmony between music and architecture at St. Florian' Abbey.

It seems that everything planned for "Linz 2009" seems to be flowing harmoniously together: traditional and modern: the new and the tried and true. Fortified with Austrian charm and the romantic setting, the city is primed for success in 2009.