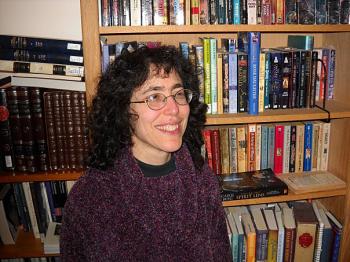 Molly A. Daniels-Ramanujan
View profile
Follow
biggersmaller
Print
Linda met her husband at a synagogue dinner. It turned out to be a momentous event in her life. Across from her, at a long table full of single men, sat Phil Glaser. Linda’s sister, Lisa, predicted at first sight, “He’s the man you’re going to marry.”

In their search for a community that shared their values, Phil and Linda discovered EcoVillage. Till then, they were thought to be eccentric because they were serious about recycling.

Linda’s father was a successful psychologist; her mother was a speech therapist, but as a married woman, she devoted her life to her five children. The family moved to Elkins Park, a suburb of Philadelphia. They lived on a U-shaped street, and everyone in the neighborhood was friendly. What could have been better?

Due to biochemical changes in his body, her father began to act unpredictably. He was 37, but his condition was only diagnosed when he turned 60. After all, he was the expert, and no one could seek help without his permission.

His bipolar disorder went between mania and depressive behavior. In literary history, many poets have been diagnosed with such mood disorders.

Christopher Smart was sent to Bedlam. There were many great poets who were afflicted, including William Blake, who sat naked in the park with his wife. In our time, Robert Lowell climbed a light pole when hypomanic.

When Linda’s father signed a contract to write an academic book, he ended up writing a book of verse, and the publishing company sued him for the advance he had spent. His wasteful spending in every way and at any time ruined the family’s finances. In the end, the family gave up their home to live in a school bus when Linda was 8 years old.

Though the situation was tragic, I could not help remarking on her great adventure of living in a school bus and seeking fellow communitarians and alternative-lifestyle camps in the 70s.

No doubt, it was no laughing matter for the six people who perforce had to embark on odysseys of their father’s choosing.

I asked about the characters Linda encountered on the way. She thought some stood out as memorable. When the family finally settled in Florida, there was Ken Keyes, Jr., whose personality was charismatic and magnetic. His books included “Handbook to Higher Consciousness.” Linda’s parents helped him copyedit it. Ken was remarkable; he had had polio and had to use a wheelchair.

The family spent three years in Florida, but the father’s mental problems surfaced again, averaging every four years. For the mother, keeping the family together was her main endeavor.

Linda’s story got me interested in her maternal and paternal grandmothers. They were studies in contrast.

She says, “My paternal grandmother, Laura Beltz (Mom-Mom), was the daughter of a rent collector in Poland, an important man, but he was stern and strict. Mom-Mom snuck over the border into Russia to go to dental school. She was one of only three women and the only Jew (or was it the other way around?).

“She fled the pogroms and came to America. She had to leave behind her fiancé, who had been conscripted into the Czar’s army. When Mom-Mom’s fiancé could not make it to America, she married his brother. Mom-Mom’s great disappointment was that her degree in dentistry from Russia was not accepted in America.

“My maternal grandmother, Rose Friedman (Nanny), came from Latvia. She was more like the popular idea of a Jewish mother. Nanny fed us fabulous chicken soup and worried we weren’t eating enough. She came to the United States as a child, bringing with her the traditions of kugel and knaidlach, with which she nurtured us.

“Looking back on my life, I would say it has been an interesting one. And it’s been interesting in a different way since my husband, Phil, and our two daughters, Elisheva and Tzipora, moved to EcoVillage.”