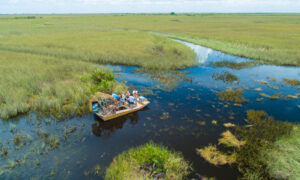 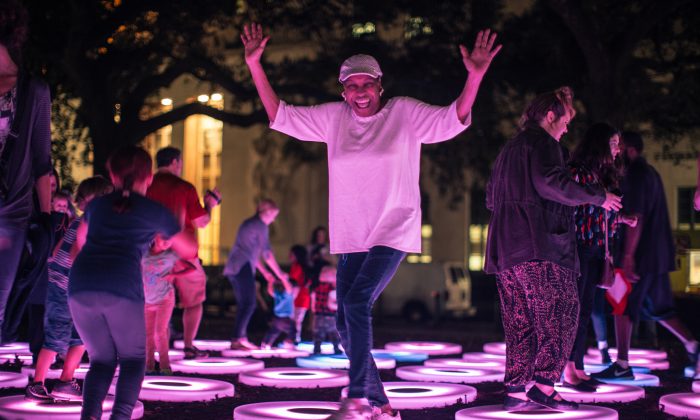 Move over, holiday lights. Large-scale light installations that blend contemporary art and technology are taking off as a trend, lighting up the night from New Orleans and Baltimore to Sydney and London.

Many of these free light festivals include interactive displays that turn spectators into participants who can change colors or patterns by moving or playing a game. The events are also tourism magnets, attracting locals and out-of-towners alike to waterfronts, historic districts and other neighborhoods on dark winter nights and other periods when tourist activity may be low.

London counted more than a million visitors to its first light festival over four nights in January this year. The Lumiere London event included a larger-than-life projected elephant stomping through the air, a digital painting at Westminster Abbey and sculpted human forms flying above buildings.

New Orleans’ LUNA Fete attracted 30,000 visitors in 2015, its second year. The event included “The Pool” by artist Jen Lewin, in which a pool of swirling circles of light and color changed as spectators interact with it. “The Pool” will also be part of Baltimore’s first light festival, Light City Baltimore, taking place around the city’s Inner Harbor March 28-April 3.

Other exhibitions at Light City Baltimore will include digital portraits by an artist projecting lights, patterns and colors on festival-goers; “Lumin,” featuring lit-up sheets of acrylic that visitors can draw on to create a glowing, collaborative mural, and a flower sculpture called “Laser Lotus” that changes based on input from interactive touchpads.

Why the sudden boom in light festivals? For one thing, said Nick Stillman, acting director of Arts Council New Orleans, which organized LUNA Fete, “the technology is becoming more accessible and user-friendly and inexpensive.”

Contemporary artists are also increasingly using multimedia platforms and public spaces to bring art to wider audiences, collaborating with museums, governments and other entities “to produce things on a scale that is larger and more impactful” than what can be done in a studio, gallery or even a public plaza, Stillman said.

‘Take a Moment’ for Tea at the Ottawa Tea Festival

Public art, he added, is no longer just “a sculpture plopped in a plaza and left there for a couple of years until maintenance is done. We can be so much more engaging than that.”

Some light festivals include performances, conferences and other cultural components. In Australia, Vivid Sydney attracted 1.7 million people last year with 70 bands and 500 speakers in addition to more than 80 light installations. The Sydney event included light projections on famous buildings like the Sydney Opera House. Vivid Sydney’s eighth light festival, May 27-June 18 of this year, will include giant, luminous animal sculptures in a display at the Taronga Zoo.

In Canada, Montreal en Lumiere, a wintertime arts festival that’s running now through March 5, includes light installations in Old Montreal, the Place des Festivals and other locations. In Germany, Berlin’s Festival of Lights uses projections and 3-D video mapping to turn buildings like the Brandenburg Gate into light art. Jerusalem drew 250,000 visitors to its light festival last year, which returns this year May 25- June 2 with 3-D light exhibits, videos and other displays using buildings in the Old City.

Milwaukee: City of Festivals and More

Other light shows are more movie-like than conceptual, using large-scale video projections to tell stories. Chichen Itza, the ancient Mayan complex in Mexico, started a light show last year called “Nights of Kukulkan,” named for the Pyramid of Kukulkan. Shown nightly, the show is projected on Kukulkan’s facade and tells the story of the Mayan people.

Most light festivals are more sophisticated than the usual holiday displays of twinkling reindeer, snowmen and trees that light up city parks, botanical gardens and resort grounds each December. But even some of the big artsy light festivals take place over the Christmastime holidays. Illuminate SF Festival enters its fourth season this year with light art on display in San Francisco from Thanksgiving to New Year’s Day.

The organizers of New Orleans’ festival cite the Fete des Lumieres in Lyon, France, as their inspiration. The long-running Lyon event typically attracts millions of spectators, but it was cancelled last year following the terror attacks in Paris.

Instead, organizers in Lyon used light to create a simple but powerful one-night tribute to the Paris victims. They asked residents to place candles in their windows, and showed just one large-scale work, called “Regards.” It featured close-ups of the eyes of figures from master paintings, and was shown in conjunction with a scroll of the names of victims from the terror attacks.