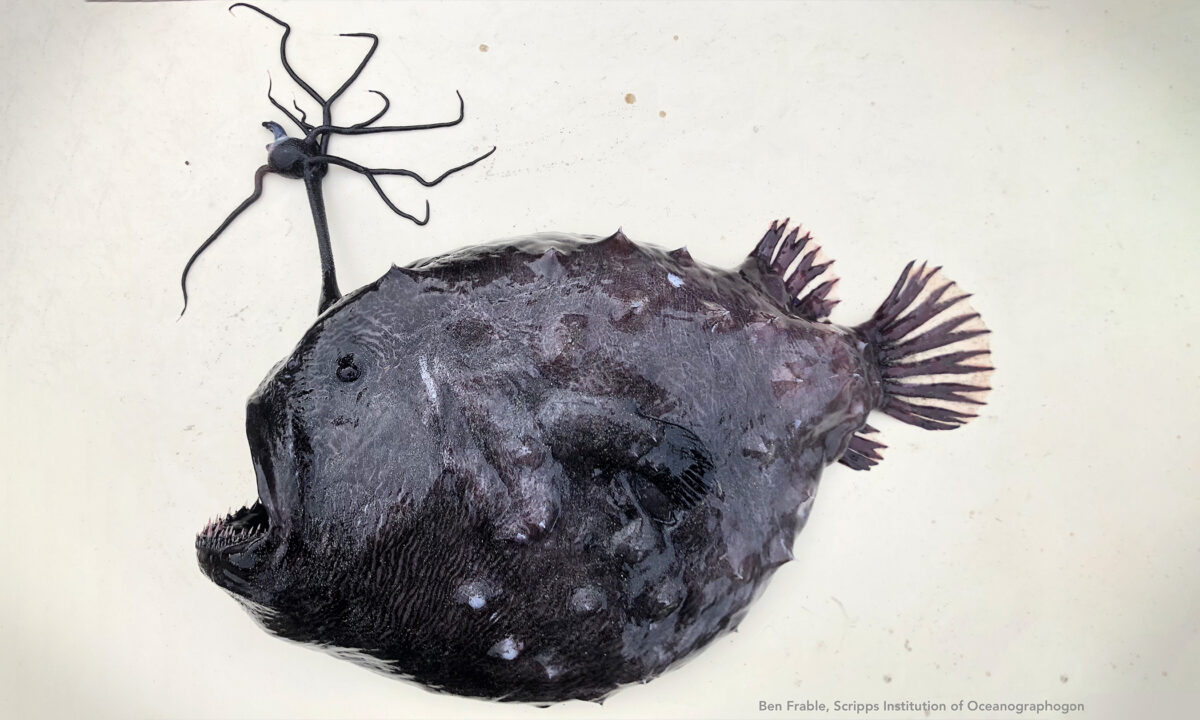 A mysterious black blob of a fish—featuring terrifying spiny flesh, rows of long needle-sharp teeth, and strange alien-like appendage growing out of its head—gave lifeguards a start after washing up in Encinitas, California, in early December.

The exceedingly rare specimen, called a Pacific footballfish, one of the largest species of anglerfish, was found by a surfer at Swami’s Beach, who handed it to lifeguards, who in turn passed it to oceanographic scientists for further study.

Ichthyologist Ben Frable from Scripps Institution of Oceanography at UC San Diego was only too pleased to receive the unique deep-sea swimmer intact.

Looking like something from the movie “Aliens,” these creatures dwell at depths of 650 to 2,600 feet below the sea where no sunlight penetrates—hence the strange “fishing pole” (illicium) growing out of their head from which dangles a glowing phosphorescent bulb (or ecsa) that attracts prey amidst the pitch dark. They possess a globular-shaped body and long, scary teeth that are angled inward, helping to ensure no food escapes.

Frable collected tissue samples from the fish for genetic analysis and took X-rays as part of his research, while stomach contents will offer insight into deep-sea food webs. The rare specimen lacked signs of physical trauma or toxins, such as from oil spills. Frable is preserving the footballfish for future scientists to study.

Weighing 5.5 pounds and measuring nearly 13 inches, it was determined to be a mature female—which are much larger than males. Anglerfish demonstrate extreme sexual dimorphism (where sexes exhibit different traits).

With only 31 known specimens collected worldwide, and none being observed in the wild, very little is known about the unusual fish, such as what they eat or how they reproduce. Finding such specimens is considered a rare opportunity to gain new insights.

Adding to the mystery is the fact that the number of anglerfish washing up on California shores has doubled in the last year, with three sightings of the deep-sea creature in 2021. One was photographed in November on Black’s Beach in La Jolla; another was sighted in Newport Beach in May. Hence, scientists are asking beach goers to contact either Scripps at scrippsnews@ucsd.edu, or via direct message on Twitter, or lifeguards if they stumble upon one.

“Experts don’t have any evidence to theorize why several deep-sea fish have washed ashore recently, but are interested in learning more about the specimens that have been collected, as well as any new ones that might wash up,” Scripps stated.

While the rows of teeth, spines, and jet-black flesh may call to mind something from Sigourney Weaver’s worst nightmares, Dr. Frable insists she’s nevertheless a “beautiful fish.”

(Courtesy of Scripps Institution of Oceanography)