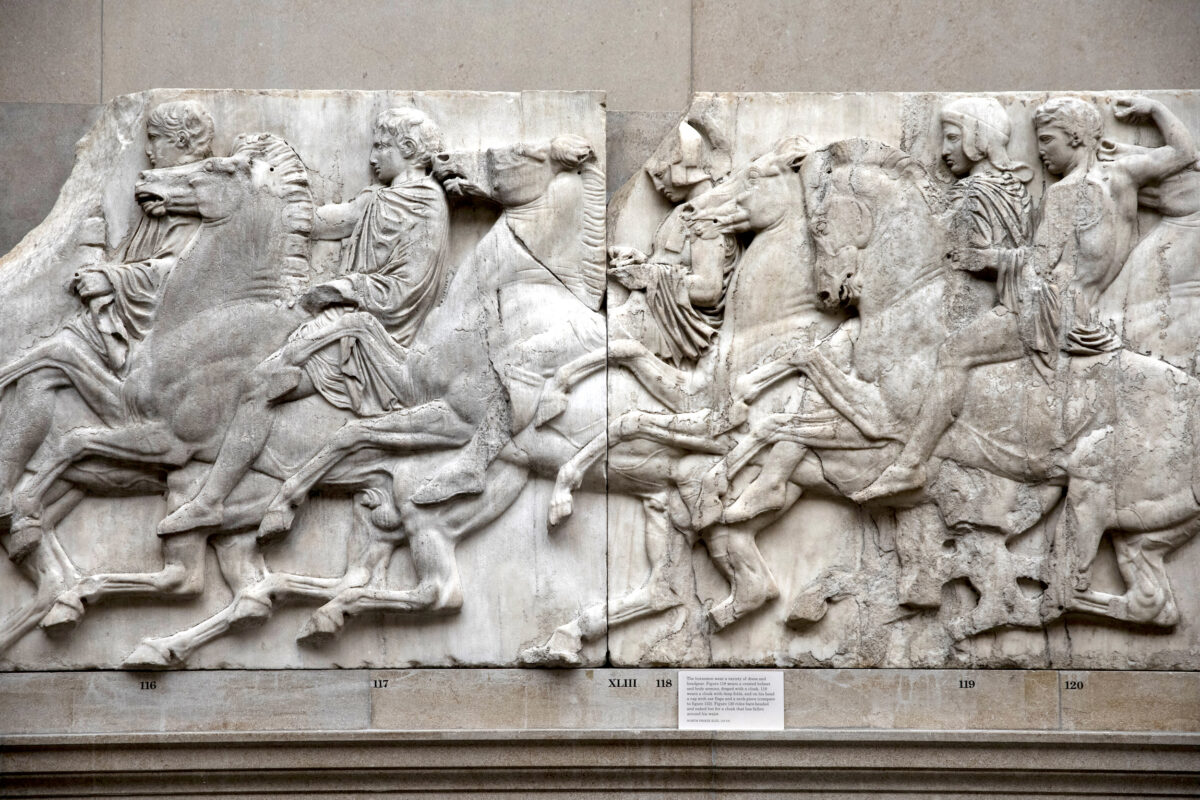 Sections of the Parthenon Marbles also known as the Elgin Marbles are displayed at The British Museum on Nov. 22, 2018, in London. (Dan Kitwood/Getty Images)
Arts & Tradition

Though he was the greatest artist in the greatest city, Phidias was hounded by trials and tribulations throughout his career. It was how he responded that really defines his legacy.
BY Matthew John TIMEJune 27, 2022 PRINT

Comb through any of the latest art history or humanities textbooks, and you’re likely to find little if any mention of his name. Not even once does he appear in McGraw Hill’s “The Humanities Through the Arts”—now in its 10th edition. “Picasso,” meanwhile, registers a whopping 34 entries in the index.

Yet Phidias (also spelled as Pheidias) deserves better. He was a phenomenon in his day—the Michelangelo of the ancient world, if you will. He was heralded as the greatest artist in what was arguably the greatest city (Athens), with renown that reached as wide as Greek civilization.

Yet perhaps most striking are the ordeals that Phidias faced in his lifetime and, importantly, how he responded. But to that we’ll turn in a moment.

First, a bit of a biopic, given how unfamiliar readers are likely to be with the ancient giant and his achievements, and these, as we’ll see, set the stage for appreciating his impressive character.

If you’ve ever made it to The British Museum or otherwise caught a glimpse of the legendary Elgin Marbles, you’ve at least seen some of Phidias’s accomplishments, if not recognized them. For Phidias was the one responsible for these masterful works of marble sculpture that adorned the ancient Greek Parthenon—the towering artistic achievement that paid tribute to Athena, Athens’s patron goddess.

The marble friezes—three-dimensional reliefs on the walls of the temple—were, and still are, 24 centuries later, heralded for their superb rendering of the human figure. There’s an arrestingly lifelike quality to the Elgin figures, which are arranged in compositions that impart, overall, a “monumental” quality—as art historians describe it.

But perhaps most important, artistically, was his restrained and harmonious depiction of the human body. This came to be known as Phidias’s hallmark and gave rise to what is today regarded as the quintessential classical or idealistic style. It’s the epitome of Greek art from the later 5th through 4th centuries B.C.

(This is in contrast to the later Hellenistic style, which was marked by a fixation on pathos, melodrama, and emotional extremism. Gone was the balance, harmony, and sense of self-mastery found in Phidias’s works from the Golden Age of Athens.)

But the Elgin marbles pale in grandeur to what Phidias and his workshop devised for the inner sanctuary of the Parthenon: a towering statue of Athena Parthenos, three stories tall and made of ivory and gold.

You read that right: not decorated in the two precious substances, but actually made of them.

According to archaeologist and art historian Kenneth Lapatin, Phidias pioneered an utterly original technique of ivory working that allowed him and his workshop’s crew to “unscroll”—much like when sharpening a pencil—the ivory of elephant tusks and remold it into any shape imagined. Large, formed pieces of this ivory were thus affixed to a large wooden frame, piece by piece, painstakingly, with elaborate gold adornments then affixed to her figure—imparting to Athena the glory her Athenian patrons felt her worthy of. The statue alone is said to have taken an estimated nine years to complete.

By 432 B.C., when the Parthenon project was completed, Phidias was heralded as a genius and master.

But with his growing greatness came detractors. And herein lies the second part of Phidias’s tale: the adversity he faced, and what we can learn, millennia later, from his response.

What we often forget when bedazzled by the glamour and glory that comes with fame and fortune is at what great cost, or with what challenges, such celebritydom comes.

Phidias was soon to find out.

Some time after finishing his work on the Parthenon (the historical sources aren’t clear on the details), the unthinkable occurred: Phidias was accused of stealing gold that was meant for his Athena.

While he was able to prove before an Athenian court that he was innocent of the charge (by one account, he had ingeniously made Athena’s golden adornments removable so they could be weighed in the event of such accusations), his detractors upped the ante.

They then accused him of impiety—of all things. He had supposedly included in Athena’s shield images of himself and his powerful patron, Pericles. (A charge that, if true, it should be said, would be quite forgivable, given the creative license with which artists over the centuries have sought to embed their “signature” or likeness in a work. Think of Raphael’s “School of Athens,” for instance—for which no one today thinks any lesser of the Renaissance master.)

The sequence of events that ensued is, again, a little murky, but what’s apparent is that this charge was harder to shake. Phidias was either exiled (by some accounts) or imprisoned in an Athenian jail (by other accounts). In either case, he didn’t fare so well before the court this time.

How did Phidias respond, though? Was he devastated, as we might imagine—having just poured his heart and soul into a groundbreaking and majestic work, day in, day out, for nearly a decade? Or perhaps embittered, as would seem well justified? Did he hang up his hammer and chisel, and call it a career?

While we’re left to speculate as to the psychological details of the “dark night of the soul” Phidias must have been experiencing, what the historical record does make clear is this: He bounced back, better than ever.

Hardly down for the count, Phidias responded to the gut-wrenching mistreatment in the classiest of classical manners. Rather than let his detractors get to him, he got back up. He took up a commission to repeat the feat, as it were, at Olympia—then the site of the greatest event of the ancient world, the Olympics. There, he would go on to build what became known as one of the Seven Wonders of the World: a massive, 40-foot-high ivory, gold, and ebony statue of the greatest Greek god, Zeus.

(The project itself, once again, would be a feat of perseverance: It took Phidias and his helpers fully eight years to construct. It was this very statue that would later inspire Daniel Chester French’s Lincoln statue at the Washington memorial.)

One can hardly think of a better response to one’s adversaries, if not life’s adversities, more generally: to get back up, do it all over again, and make things even better and more glorious than before.

As much as the resplendent classical style and legendary monuments that Phidias left to the world, it would seem that his very life story contains something of just as much value.