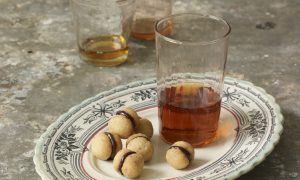 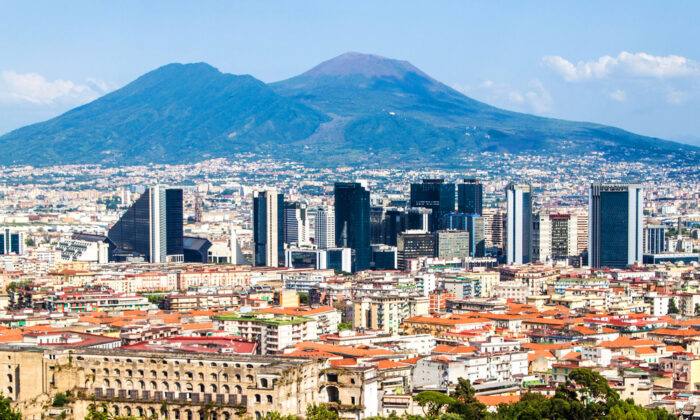 In the distance, Mount Vesuvius is ever present. (Matyas Rehak/Shutterstock)
Destinations

Wilhelm Höjer
Journalist Wilhelm Höjer is a Swedish native who studied philosophy and journalism at the Angelicum in Rome. In 2020 he began teaching at the classical Christian school Lindisfarne Hall on Amelia Island, where he and his wife Sally live with their son Crispin.
View profile
Follow
biggersmaller
Print

Naples is the third-largest city in Italy after Rome and Milan, but during its nearly 3,000-year history, it has never been the favorite child of the Italian peninsula. Accustomed to making it on its own, it has grown robust, but it’s a bit rough around the edges.

The streets are based on an ancient Greco-Roman order: Three parallel streets running east-west are intersected by a series of smaller streets running north-south, of which one is Via Duomo, where the medieval Il Duomo, also known as Cathedral of the Assumption of Mary, rises over the rooftops.

From the harbor of the Bay of Naples, you can walk down Via Duomo into the heart of the city and sit down with a coffee at Caffè del Duomo to study the public square in the cathedral’s shadow.

Each afternoon, the square turns into a soccer pitch for the young boys of the neighborhood, as they kick a soccer ball against its pillars. That modern picture against an ancient backdrop is a fitting metaphor for life in Naples.

Beyond the square, the cathedral protects a chapel with the relics of one of the city’s beloved patron saints, San Gennaro. The chapel is officially owned by the city and its people, rather than the church.

The border between the church and state is marked at the entrance by a large iron gate crowned by a bust of San Gennaro, and on the floor is the seal of Naples before each of the three altars. A large collection of gold, silver, and jewels, donated by the faithful as votive gifts of thanksgiving, are kept in an adjacent room.

The Greco-Roman city-states must be given the honor for giving us the public square, the marketplace, as something more than a space for public commerce. The idea that the marketplace is the town’s living room—a room for both lounging and study, for relaxation and education—has very ancient roots. The history of Socrates, for example, shows us how close the connections have been between the birth of the public marketplace and the birth of political morality and philosophy.

The Greek marketplace, the agora, was the living room for the Socratic school of philosophy. Because the marketplace is a public room that people share, it also becomes a classroom to study human behavior. Socrates didn’t sit at home and write; he walked around outside and mingled with people in the agora in Athens. He wasn’t even a public speaker; he was having conversations and asking questions of those he met in the marketplace. Though he was sentenced to death, his dialogues, written down by Plato, remain with us. Even today, his perennial questions continue to be repeated in conversations in every marketplace.

The marketplace is a rich image in our culture. In his famous painting “The School of Athens,” Raphael depicted Plato and Aristotle talking to each other during a daily stroll through a busy marketplace. Religion, philosophy, and political rhetoric still fight for public space today—just listen to the sounds of Naples!

To study that phenomenon further, you can leave Via Duomo and walk down Via dei Tribunali. Pick any table under the vaulted porticos before the marketplaces, order a local margherita pizza, and open your eyes and ears to that cacophony, that symphony.

Soccer fans gesticulating on their way to the stadium, priests in cassocks, traveling musicians, jugglers, street artists, businessmen calling out for customers, street sweepers, and people having political discussions all fight for their space—and the marketplace. Inside the coffee bars, the voices of the people speak either about “Maradona” or “La Madonna,” for soccer and religion are the two lungs of Naples.

Those squares, some makeshift, not larger than a street, are all over the city and give us the space to be free people. Though Vesuvius may loom overhead, though death is ever-present, life is protected and celebrated in this beautiful city under the Cathedral of Naples.

Wilhelm Höjer
Follow
Journalist Wilhelm Höjer is a Swedish native who studied philosophy and journalism at the Angelicum in Rome. In 2020 he began teaching at the classical Christian school Lindisfarne Hall on Amelia Island, where he and his wife Sally live with their son Crispin.
TOP NEWS