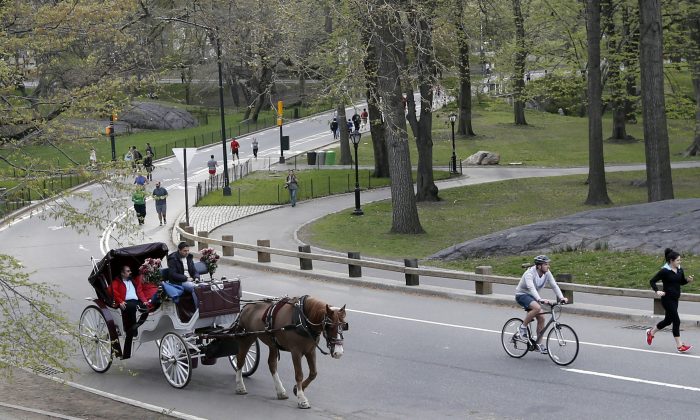 Epoch Times recently published “Horse-Drawn Carriages: Which Side Are You On?” Among the responses from readers were the following:

Carriage driver and industry spokesman Stephen Malone tries to differentiate those, such as myself, who want a ban on horse drawn carriages, from those who defend the industry.

“There’s nothing in it for them,” he says. Exactly.

Unlike Mr. Malone, and most of the industry defenders, we do not have a financial interest at stake. Unlike Mr. Malone’s hopes for continued cash payments, we are hoping for safer streets for all, and an end to this antiquated industry.

They erroneously want to make the opposition out as either insane, unemployed losers or, on the flip side, wealthy real estate land-grabbers.

Grassroots organizations such as the Coalition to Ban Horse-Drawn Carriages and Win Animal Rights have been calling for a ban for nearly 10 years now, and others were calling for it even earlier. We have documented and personally witnessed numerous incidents over those years resulting in injury to horses and people, and death to horses. For us, this has nothing to do with current politics except for the fact that de Blasio happened to wisely agree that they should be banned.

I happen to like living in the city, have a good-paying steady job that I enjoy, and acknowledge cars as a perhaps annoying-but-necessary part of modern civilization. What is not necessary is a small, antiquated industry that entails cruelty to animals, all for the entertainment of a few tourists.

The carriage industry has managed to co-opt the Daily News into speaking for them. Who has the money and influence here? I am on the side of the horses. And I say it’s way past the time to free them of their enslavement.

I personally find the horse carriages deeply disturbing, and live nearby where I detest having to pass by them. They look miserable and unhappy and it has always felt wrong to me, always.

Change doesn’t come easy. There will always be those who hold on to the old way, regardless of whether it’s right or wrong; those who do what’s right are the good politicians. I favor Mayor Bill de Blasio for his courage to take this stance.

Intelligence breeds humanity. Humanity breeds change toward a society where animals in addition to humans are considered worthwhile and not objectified. Horses are living, breathing, sentient creatures that feel—and should not be in chaotic, loud NYC period. That is my stance.