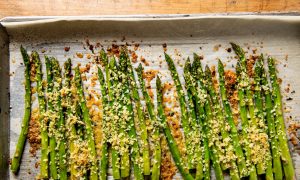 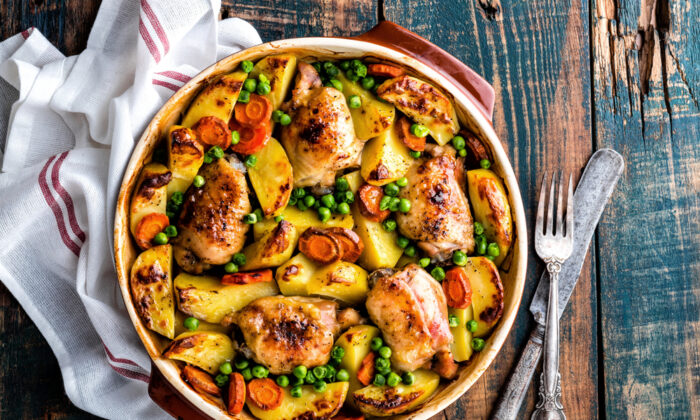 Chicken and vegetables, rice and beans, a pan of sliced fruit—all transform in the heat of the oven, with little hands-on effort required. (Shutterstock)
Food & Dining

Let Your Oven Do the Work

I am an inveterate roaster—it’s my favorite cooking method—partly because it’s easy.

You don’t have to brown pieces of meat, or nudge the lid on your casserole to regulate the reduction of cooking juices. Beef caramelizes to sweetness, the skin on a chicken becomes crisp with salt and bronzed; you can sense that they will be tender.

We mostly associate roasting with meat, but I like it so much as an approach that I’ve tried it on nearly everything. Its dry heat works on fruit, vegetables, and fish, charring the edges of peach halves and wedges of pumpkin. It intensifies flavor, which is why cottony apricots and insipid tomatoes become something else entirely, their essence—hiding in there the whole time—distilled, and their sweetness brought to the fore.

You have to learn to use your oven well; if you’re cooking a main course, it makes sense to shove in a tray of peppers or tomatoes that will see you through the next few days, too. I am nearly always roasting or baking a dish to eat that night and raiding the refrigerator to see what else can be usefully cooked on another shelf at the same time. I even use the oven to cook steaks and pork chops (my steaks and chops are “sear-roasted”; once you’ve tried this, you’ll find it’s easier than cooking them on the stovetop and it produces great results).

Originally, roasting wasn’t done in a closed box, but in front of a fire, the meat either on the hearth or suspended from a hook, and someone had to move it around to make sure it cooked evenly. It was the price of fuel that led to the development, during the late 18th century in England and in the American colonies, of a “closed hearth,” the precursor to the modern oven. Not everyone liked it.

Some food writers decried the loss of “proper” roasts claiming, as English writer Dorothy Hartley did, that meat cooked in this closed chamber was now baked rather than roasted. In fact, baking and roasting are both methods of cooking in dry heat, it’s what we are cooking that usually dictates the word we use: bread is baked, chickens are roasted. Fat has a role to play in dictating which term is used as well. The difference between a roast potato and a baked one is that the first is cooked in fat.

Roasting—cooking in dry heat—isn’t the only thing that goes on in the oven. When you cook meat in a covered pot with a little liquid (and vegetables or aromatics), it’s called pot-roasting and there are a few recipes in my book for pot roasts, too. The redoubtable Anne Willan, in her “Complete Guide to Cookery,” writes that pot-roasting “… is not at all precise. It means to cook in the oven in a covered casserole but with what, and how, is up to the cook.”

It can be as simple as browning a chicken, then setting it on a bed of chopped onions and herbs, adding a splash of vermouth, and letting the meat make its own juices, or it can be surrounded by more liquid—stock or wine—and larger vegetables (whole waxy potatoes, carrots, and leeks). The vegetables become more than just an accompaniment, as they’ve cooked in the meat’s juices.

Apart from the convenience of having meat and vegetables together—so you don’t have to cook a side dish—the key thing with this approach is the moistness of the flesh and the exchange of flavors. The moist heat created in the pot produces a very different result from the dry heat of roasting.

There are also many recipes in here that use an approach somewhere between dry roasting and pot roasting. The protein being roasted—usually chicken thighs or fish—sits on a layer of vegetables moistened with a little stock, alcohol, or water. If you’ve salted the chicken skin, it will become crisp and you end up with a dish that is part braise, part roast: vegetables imbued with meat juices and a bit of burnished protein on top. There’s no carving and the dish can be served straight from the pan.

There are also recipes in which rice—long-grain rice or Spanish paella rice—is cooked in the oven in stock, the liquid becoming absorbed by the fattening grains while meat, fish, or vegetables cook on top. To me, these offer the best of all possible worlds, dishes transformed by the heat of the oven that have everything: a golden finish, moist vegetables, and starch.

And don’t think that it’s always meat that is the star. Chucking vegetables—roots or Mediterranean vegetables, wedges of cabbage, or trays of broccoli—into the oven (once they’ve been tossed in melted butter or olive oil) is something I do most evenings. If the main dish doesn’t include vegetables, I cook them alongside (and these days vegetables are often the main dish, not a supporting act). Even peas, radishes, and string beans can be cooked in the oven. Roasting makes them taste even more like themselves, their character concentrated rather than lost.

When roasting different vegetables together, you have to be aware of their different cooking times, adding each vegetable at the right moment (e.g. string beans to roast tomatoes once the tomatoes are becoming caramelized), and you need to cut them to the correct size, too, so they can cook together and be ready at the same time. The more you cook vegetables in the oven, the more you find out what each requires.

Most of the recipes are very straightforward, but there are a couple of things to remember when you’re cooking in the oven: bring the food to room temperature beforehand, and heat the oven in advance. An oven thermometer is invaluable. I use it to check the temperature both before cooking—to make sure the oven has hit the temperature to which it’s set—and during cooking. Oven temperatures fluctuate. When that happens, I adjust it.

I also get my oven calibrated fairly regularly. No matter how stellar your oven, there’s a good chance that it’s a little hotter or a little cooler than it says it is. You may try recipes in this book and find that it takes a bit longer or, perhaps, less time to get the required result. Make a note of this, so that you know what to do the next time.

Cooking food in the oven is easy, but it brings another pleasure too; although I know I’m the one who has smeared the bird with butter, mixed the crumble with my fingers or halved the peppers and turned them over in olive oil, I always feel, when I take food out of the oven, that someone else has cooked it. I’ve basically been drinking wine and enjoying the smell as it starts to permeate the kitchen; the cooking has done itself.

When you put meat or a pile of roasted vegetables on a platter, you don’t feel that you are serving it, but that it’s serving itself: it looks like an offering. This is one of the reasons I don’t think cooking is difficult, or it certainly doesn’t have to be. The alchemy of heat is a gift.

With only a little knowledge—and gradual practice—you can learn how to use the warmth within that closed box.

Excerpted with permission from “From the Oven to the Table: Simple Dishes That Look After Themselves” by Diana Henry. Published by Mitchell Beazley.