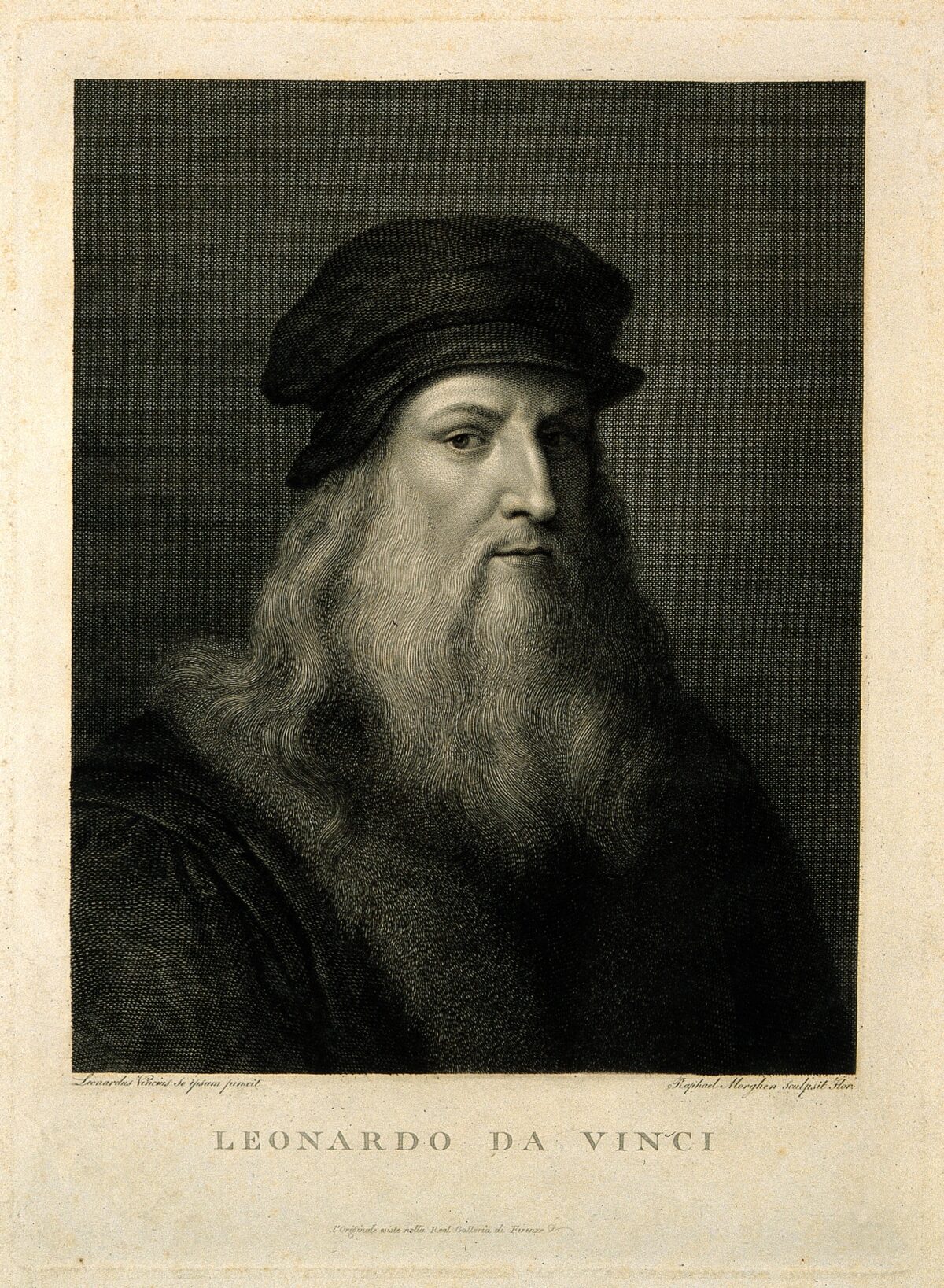 Throughout this article, I draw on quotes from my conversation with Clayton, along with references from his book “Leonardo da Vinci: The Mechanics of Man.” All conclusions, unless otherwise stated, are my own.

Clayton and I discussed his motivation to research Leonardo da Vinci, and, with a reminiscent chuckle, he told me that his interest in Leonardo was a product of circumstance. Clayton had just graduated college when he was fortunate enough to get a job at the prints and drawings department at Windsor Castle. Constantly surrounded by Leonardo’s drawings, he naturally developed a deep fascination and love for them, especially Leonardo’s anatomical studies.

From Human Anatomy to the Divine Soul

Leonardo’s interest in anatomy also began as a product of circumstance. Initially, he was most interested in writing a treatise on painting, and the study of anatomy was but a means to this end; his fascination with the complexities of the human body inspired his attempt to thoroughly research anatomy for a scientific treatise.

For Leonardo, anatomical knowledge wasn’t only about replicating accurate skeletal and muscular structure for artwork; he thought that he could possess a better understanding of human existence if he understood the interplay of emotions and human development. In “Leonardo da Vinci: The Mechanics of Man,” Clayton states: “Leonardo’s early anatomical studies were rather unfocused, for he wished to explain every aspect of the human body—not just structural anatomy, but also conception and growth, the expression of the emotions, the nature of the senses, and so on.”

In pursuit of the truth about human existence, Leonardo moved backward from the human body’s physical form to the soul of the human being. After studying the musculoskeletal system, he speculated that an in-depth study of the nervous system would better enable him to understand and explain the effect emotions had on the human body’s expressions. However, after the nervous system proved inadequate as the supreme cause of human experiences, Leonardo knew that something more profound was directly responsible.

“The structural, mechanical perfection of the body was the guiding principle for Leonardo in this campaign of investigation. Though God is never directly invoked … Leonardo lauds ‘the first composer of such a machine’… and … he attributes a feature to ‘the master.’ … More frequently, however, ‘nature’… is given as the author of a particular feature—for example, ‘Here you see the wisdom of nature in providing two causes for movement in each limb.’ He stated that ‘If this composition appears to you a marvelous piece of work, you should regard this as nothing compared to the soul that dwells within the architecture; and truly whatever that may be, it is a thing divine.”

From Leonardo’s discoveries, we can presume that the ultimate cause for human existence is the master composer’s infusion of wisdom in both nature and the divine soul of the human being. This revelation also suggests that there is an intrinsic connectivity between the master, nature, and the human being’s divine soul.

Early in Leonardo’s anatomy studies, there were not a lot of human resources available to him for direct study. Human dissection for an occupational craftsman was hard to come by. According to Clayton, “Many of Leonardo’s early anatomical observations were thus based on a blend of received wisdom, animal dissection, and mere speculation.”

It wasn’t until 1503, when Leonardo received a commission to paint a mural of the Battle of Anghiari (between Milan and the Republic of Florence in 1440), that Leonardo was given more access to anatomical resources, and he returned to his anatomical studies in preparation for the large-scale, multi-figural composition. Although Leonardo was focused on the practical use of anatomy for accurate representation, it wasn’t long before his interest in the human being again became a pursuit.

“In the winter of 1507–08 … he was permitted to conduct an autopsy of an old man … and indeed a year or so later he stated, ‘I have dissected more than 10 human bodies.’… The number of corpses he claimed to have dissected grew from ‘more than 10’ around 1509 to ‘more than 30’ toward the end of his life, and the abundance of drawings based on human dissection confirms that Leonardo now had no shortage of material. Consequently, almost every drawing and statement in Leonardo’s notes is based on direct investigation…” (“Leonardo da Vinci: The Mechanics of Man”).

Clayton expressed that despite Leonardo’s intense studies of anatomy, his artwork appeared to discard the use of any anatomical reference. “St. John the Baptist,” composed by Leonardo between 1513–1516, is a great example of how he used very little detailed anatomy to represent the human form. Ironically, the more versed Leonardo became in anatomical accuracy, the less his artwork appeared to demonstrate the use of such detail, for a more general, supersensual approach.

Art was a scientific pursuit for Leonardo, and his anatomical drawings were his way of attempting to structure the knowledge he was gaining. Leonardo’s studies became less about the mere practice of drawing and more about synthesizing the knowledge he was pursuing about existence. Is this why Leonardo took a notoriously long time to complete his comparatively few commissioned projects? Is it that he was more interested in pursuing knowledge about the human body and soul rather than creating artwork?

This immediately reminded me of the enlightenment philosopher’s metaphysical inquiries into the structure of knowledge, which is a more theoretical approach to how we synthesize information. Through drawing, Leonardo was engaging in an existentially practical—as opposed to merely theoretical—attempt to uncover the mysteries of how human beings exist. It is possible that Leonardo was taking a philosophical approach to beauty.

Marsilio Ficino, a leading philosopher during Leonardo’s time, was the first to translate Plato’s works from Greek to Latin, thus making Plato’s writings more available to the public. Ficino wrote a commentary on Socrates’s “Symposium,” a text on the nature of love. In the “Symposium,” Socrates retells Diotima’s exposition on love: There are six types of love, and each is placed on a rung of a ladder representing the ascent of love from the physical to the spiritual. He suggests that we first find love for another human being we find beautiful, but that after our passions are calmed, our love can be expressed for the whole of existence. Finally, through further cultivation, we can come to love beauty itself.

Similarly, what if Leonardo was attempting to move from particular experiences of beauty to a more general, ideal understanding of beauty? Leonardo appeared to move backward from the anatomy of the cadaver to the emotions, the nervous system, then to nature, before moving to the “divine” soul and finally “the composer.” Is it that Leonardo’s pursuit of anatomical knowledge is also a movement toward what he believed to be the divine—the ideal?

In about 1490, Leonardo crafted the “Vitruvian Man” based on the architectural treatise “De Architectura,” written by Roman architect Marcus Vitruvius Pollio, who stated:

“Just so the parts of Temples should correspond with each other, and with the whole. The navel is naturally placed in the center of the human body, and, if in a man lying with his face upward, and his hands and feet extended, from his navel as the center, a circle be described, it will touch his fingers and toes. It is not alone by a circle, that the human body is thus circumscribed, as may be seen by placing it within a square. For measuring from the feet to the crown of the head, and then across the arms fully extended, we find the latter measure equal to the former; so that lines at right angles to each other, enclosing the figure, will form a square.”

Leonardo inscribed the circle and square in respect to two positions held by the human form: one positioned with arms and legs stretched out, and the other with the arms perpendicular to the rest of the body. Many artists tried to draw the ideal human form using the geometric circle and square as their starting point, which led to their drawn figures having elongated limbs and small heads. Instead of trying to fit the human form into a circle and square, Leonardo started with the true and accurate representation of the human body, as presented by nature, and worked back to the ideal.

Leonardo didn’t only pursue the ideal body by way of general geometric forms; in the Oxford World Classics edition of his “Notebooks,” he also compared the microcosm of the body to the macrocosm of the world:

“Seeing that if a man is composed of earth, water, air, and fire, this body of earth is similar. While man has within himself bones as a stay and framework for the flesh, the world has stones which are the supports of the earth. While man has within him a pool of blood wherein the lungs as he breathes expand and contract, so the body of the earth has its ocean, which also rises and falls every six hours with the breathing of the world; as from the said pool of blood proceed the veins which spread their branches through the human body, so the ocean fills the body of the earth with an infinite number of veins of water.”

Leonardo struggled with balancing the unification of art and science. Clayton suggests that his “concern with proportion is a major element of Leonardo’s early anatomical studies …. But in attempting to determine the ideal proportions of man, Leonardo’s observations became ever more detailed, and thus a formula for ideal beauty seemed further away. In the early 1490s, Leonardo’s research into the human body, its structure, and the phenomena of life, petered out.”

Leonardo’s pursuit of perfection prevented him from reaching perfection. Clayton and I agreed that maybe Leonardo’s investigations, irrespective of their scientific or artistic nature, were more expressions of the character of a man interested in uncovering the mysteries of the universe. His artistic and scientific pursuits were, in this way, acts of personal inquiry and development.

I asked Clayton what advice he thought Leonardo would give to those of us undertaking similar pursuits today. He responded, “Draw, then think, then draw some more.”