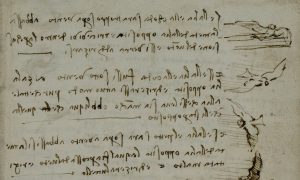 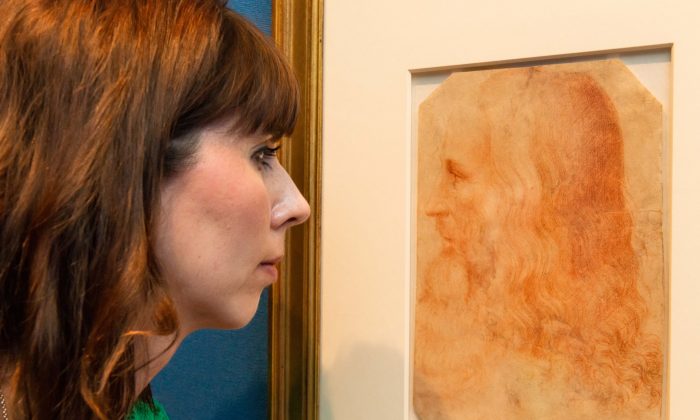 The familiar face of Leonardo da Vinci, by his assistant Francesco Melzi is on display at "Leonardo da Vinci: A Life in Drawing," at The Queen's Gallery, Buckingham Palace. (Royal Collection Trust/) Her Majesty Queen Elizabeth II 2019)
Fine Arts & Craftsmanship

Leonardo da Vinci Was ‘Fascinated by the Phenomena of Life’

An exhibition of over 200 drawings from the Royal Collection at Buckingham Palace, London
By Lorraine Ferrier

The art world is in overdrive with events to mark the 500 years since the death of the original “Renaissance man,” Leonardo da Vinci.

One exceptional exhibition, “Leonardo da Vinci: A Life in Drawing,” contains over 200 works from the unrivaled collection of Leonardo’s drawings held by the British Royal Collection Trust. The exhibition is on display through Oct. 13, 2019, in The Queen’s Gallery at Buckingham Palace, in London.

Leonardo’s interests were wide-ranging: from sculpture to architecture, cartography, engineering, anatomy, geology, and botany. And of course, painting, although he finished only around 20 paintings.

The one thing Leonardo did consistently throughout his lifetime was to draw.

Through his drawings, we can see how he relentlessly pursued inventions and solutions for problems many of us never even dream about. Nowhere can we see this process more clearly than through his drawings, notes, and manuscripts—unless we were to speak to Leonardo himself.

For us, his drawings are his mouthpiece. And oddly enough, the drawings may give us more of an insight into his work than a conversation with the man himself, as many of these images were not meant to be seen publicly. The drawings reveal the behind-the-scenes narrative, as it were, of Leonardo’s masterpieces.

His drawings “allow us to enter one of the greatest minds in history,” says Martin Clayton, exhibition curator and head of prints and drawings at the Royal Collection Trust, in a press release.

‘Fascinated by the Phenomena of Life’

Leonardo’s drawings are the main source of our knowledge about him, Clayton says. Leonardo understood the power of pictures: He believed that visual evidence could accurately and concisely convey knowledge more convincingly than words and academic argument.

Many of his drawings give us insight into his ambitious plans that never came to fruition, like a large equestrian monument; treatises on light, water, and botany; and a scheme to divert the Arno River.

Such ideas live on only through his drawings.

For Clayton, one of the highlights of the exhibition is a detailed drawing showing the internal organs of a woman, drawn around 1509–10. “It shows Leonardo trying to capture in a single sheet all the different systems that make us alive. He was fascinated by the phenomena of life,” he said, according to an NTD Television report.

“The notes on the left [in mirror writing] are not about the drawing. They are setting him further tasks,” he said. “He’s left-handed and wrote in perfect mirror [writing] throughout his life.”

Ultraviolet light highlights two previously unseen works: studies of hands for the “Adoration of the Magi.” On display for the first time, the two works show how Leonardo delicately rendered the hand gestures in preparation for painting his masterpiece.

The studies of hands cannot be seen under normal light; only a few faint outlines suggest the “hidden” hand gestures. The drawing was executed in metalpoint, and the high copper content of the stylus meant that over time a chemical reaction occurred turning the copper into copper salt, acting as invisible ink for future generations.

Also on public display for the first time is a newly identified sketch of Leonardo drawn by an unidentified assistant. Clayton first discovered the portrait while conducting research for the exhibition. The sketch is on a sheet of paper with a series of studies of horses by Leonardo. The sketch depicts the artist a few years prior to his death.

“In the sketch, he is aged about 65 and appears a little melancholy and world-weary. However, the presence of the portrait alongside studies for another grand equestrian monument shows that Leonardo’s ambitions remained undimmed in later life,”  Clayton says, in a press release.

It was Melzi to whom Leonardo bequeathed thousands of his drawings and dozens of his notebooks. Melzi spent the next 50 years putting them in order.

To find out more about “Leonardo Da Vinci: A Life in Drawing” at The Queen’s Gallery, Buckingham Palace, in London, visit RCT.uk