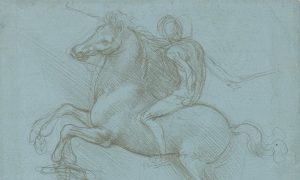 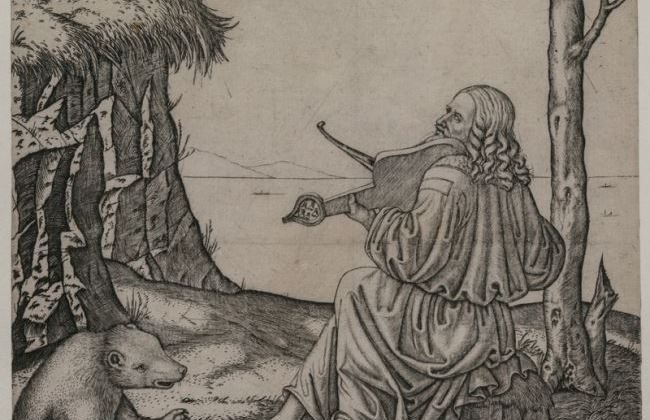 Leonardo Da Vinci: Portrait of the Artist as a Musician Is Slightly Off Key

Leonardo da Vinci has attracted more than his fair share of speculative nonsense in the modern day. Not least several unlikely theories that have taken inspiration from his interest in music. According to one idea, the hands of Jesus and his disciples in Leonardo’s famous “Last Supper” should be seen as the noteheads of music notation, producing a hidden melody, although there’s no evidence that this is what Leonardo intended.

More musical “compositions” supposedly by Leonardo circulate on YouTube, a situation fueled by the existence of a much later Baroque composer who happens to be called Leonardo Vinci. In 2015, a “portrait” of Leonardo making music was identified, on what I consider to be insufficient evidence, in an engraving at the Cleveland Museum of Art.

So if this is all nonsense, what did Leonardo really have to do with music? As 2019 marks the 500th anniversary of the Renaissance polymath’s death, the cupboard of musical myths attached to this cultural icon is in need of a clear-out.

Leonardo spent a good deal of time in his notebooks discussing the relative merits of painting, poetry, and music. Like many of his contemporaries, he enjoyed using the idea of musical harmony as a metaphor for any complex arrangement of elements that used rational(ish) principles to arrive at an orderly and attractive result.

He argued that a well-composed drawing or painting, or an elegant poem, could be harmonious just like a musical composition. But although he borrowed a musical metaphor, Leonardo wanted to show that painting was the superior art. To do this, he came up with two clever arguments.

First, he pointed out that harmony works best when you can see or hear all of the elements that go together to produce it at the same time. This happens in a painting, which is a harmony of colors, and in a musical chord, a collection of notes, but it doesn’t happen in poetry, which is just one voice.

Second, he felt strongly that harmony needs to be appreciated at length, and therefore the best art is one in which the harmony remains available for contemplation indefinitely. A painting presents its harmony forever, but musical sounds come and go in an instant.

Mission accomplished: Painting is best. The accusation that musical sounds are fleeting and insubstantial would continue to plague music for centuries after. Thanks a bunch, Leonardo.

The Food of Love

Leonardo’s interest in representing the psychology of his portrait subjects is often discussed in relation to Mona Lisa’s enigmatic smile. But the “Portrait of a Musician” attributed to Leonardo in the Pinacoteca Ambrosiana in Milan experiments with a different solution.

There’s no evidence at all to help identify the sitter, but we can be pretty sure of one thing: He wasn’t a professional musician. Around the time this painting was made, it was rapidly becoming very fashionable for rich young Italians to be painted making music.

For them, making music was all about being young, beautiful, and hopelessly in love. Leonardo’s sitter holds up a musical score for us to inspect. Unfortunately, it is no longer legible, but it’s a safe bet that it was a love song.

Then, as now, music was thought of as a powerful way of expressing emotions and communicating them to others. Songs were seen as representations of the singer’s state of mind.

In this portrait, Leonardo pioneers the representation of music making as an easy way to give the viewer an insight into the sitter’s psychology. Over the next couple of decades, this would become a standard approach in Italian portraiture.

Like the man in his portrait, Leonardo was an enthusiastic amateur musician. There’s strong evidence that he enjoyed making up poems and singing them to the accompaniment of a stringed instrument called the lira da braccio. Leonardo’s musical hobby was not at all unusual. During his lifetime, writing love poems to sing to the accompaniment of a stringed instrument was the most popular amateur musical pastime for educated Italians.

Much more unusual was Leonardo’s interest in the science of acoustics. Expert musicians paid little attention to acoustics in this period, focusing instead on the philosophy of music and the rules of musical composition. Leonardo, in contrast, approached music as a scientist interested in natural phenomena.

Using close observation, Leonardo explored how sounds moved through different kinds of materials, as Michael Eisenberg explains in his excellent short essay, “Sonic mapping in Leonardo’s ‘disegni‘.” Leonardo used his insights to develop designs for new and improved musical instruments, although, like many of Leonardo’s inventions, few of them ever saw the light of day.

Leonardo’s innovations and inventions sometimes seem alarmingly prescient, and his practice of mirror-writing gives his notebooks an air of mystique and concealment. But the real Leonardo had no mysterious prophetic messages to pass down the centuries in song. Rather, he was a jobbing artist and engineer, thinking creatively from the real circumstances of the musical culture of his day to push the boundaries of arts’ practice and understanding.

Tim Shephard is a senior lecturer in musicology at the University of Sheffield in the UK. This article was first published on The Conversation.