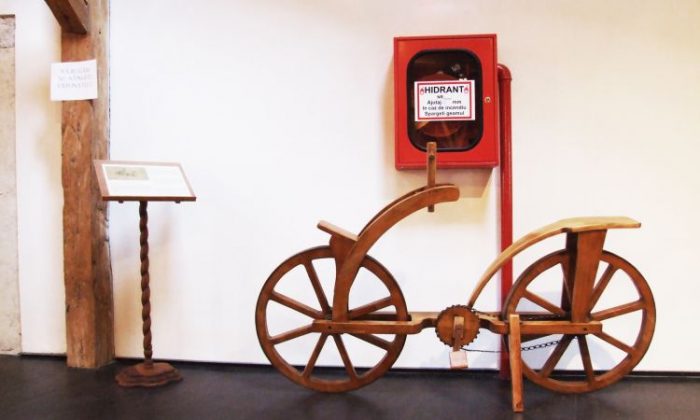 In 1966, monks at a restoration laboratory in Rome found a charcoal sketch by Leonardo da Vinci, depicting his invention of a bicycle. (Bogdan Florescu/The Epoch Times)
Arts & Culture

You may think that the bicycle is an invention of recent centuries and that mankind dreamed of such a thing only after inventing rubber for making tires. Well, think again! In the attic of the Theresia Bastion in Timisoara, Romania, stands a wonderful wooden bicycle, built according to manuscripts by the famous Florentine inventor and genius, Leonardo da Vinci.

Those too busy with shopping activities before the winter holidays probably missed the opening of the exhibit and the beautiful Renaissance music concerts during the first weeks of the exhibition, but they still have the chance to marvel at the materialized ideas of da Vinci until the middle of January.

As a special event, the exhibition has the honor of being hosted in a special place. Namely, the organizers have chosen the attic of the Theresia Bastion, a monument of great significance to the western part of Romania, a place that reinforces the atmosphere of the old and durable, specific to the inventions of the Florentine genius.

The Theresia Bastion fort was built by the Turks between 1730 and 1735 at the time of the Ottoman invasion and is the largest piece of the old fortress wall that still exists and can be visited. It is a major tourist attraction in Timisoara.

Along with the wooden reproductions of da Vinci’s machines and inventions, the Italian Consulate in Timisoara, one of the organizers of this event, arranged the exhibition of several reproductions of some of the most famous paintings by da Vinci.

Works like “La Belle Ferronnière,” “Lady With an Ermine,” “St. John the Baptist,” “Mona Lisa,” and “The Last Supper” are exhibited in real size and with an exceptional quality, along with other reproductions of sketches and charcoal drawings of the artist.

“Amidst the artworks, we have some well-known ones like ‘The Last Supper’ and ‘Mona Lisa,’ all made in natural size. Of course, they are not the originals,” one of the organizers said. “It would be very hard to ensure security and all costs for an exhibition of the original paintings.”

Leonardo, the son of the notary Piero da Vinci, lived at least 200 years earlier than the technical realization of his inventions. Not many knew at that time to appreciate his genius and inventions, and fewer understood the value and complexity of the structures he invented.

Among the ideas materialized by Italian artisans who made possible this international exhibition, we find the first concepts for the car, bicycle, helicopter, glider, parachute, scuba, submarine, and even one for a military tank, to name a few.

The exhibition provides a guide for groups that want to learn the explanations for the operation of all these mechanisms and machines as well as the impact their invention had on the technological progress that we enjoy today.

“It is the most successful exhibition ever made in Timisoara—attractive to all ages, from children and young people to old people,” the same organizer said.

“I like it very much,” said Vanessa Cutui, a student passionate about the exhibition in the attic. “I did not expect everything to be so well-realized, and I like the fact that the organizers have provided the drawings of Leonardo, so I could compare the originals with the reproductions.”

Among the models exhibited in Timisoara is a 3-D realization of the first certified sketch of a bicycle.

“He was an inventive man. All that he discovered—the role of his works—all is very interesting. I’m fascinated! I want to go and watch that bicycle there,” Nicolae Popa, an engineer, said while enjoying a real mechanics lesson given by the Italian master.

In the 16th century, the Italian sculptor Pompeo Leoni glued together many of da Vinci’s papers with drawings of war machines, underwater machines, and flying machines as well as others of his works and combined them into an album, which became known as the Atlantic Code.

In 1966, monks of the restoration laboratory in Grottaferrata, Rome, were entrusted with the mandate to renovate the Atlantic Code. The monks separated the sheets and found the charcoal sketch of a bicycle, drawn in a light brown. It was stuck to a copy of a lost drawing of da Vinci, which was drawn by one of his followers of his workshop, according to the information provided at the exhibit.

Visitors to the exhibition can sense, aside from the wonder and curiosity, a desire to live in the spirit of this genius inventor and may leave the attic inspired to strive to become a true man, a true human, with the kind of dynamic and curious mind that Leonardo da Vinci had.