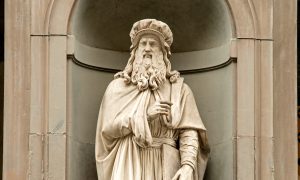 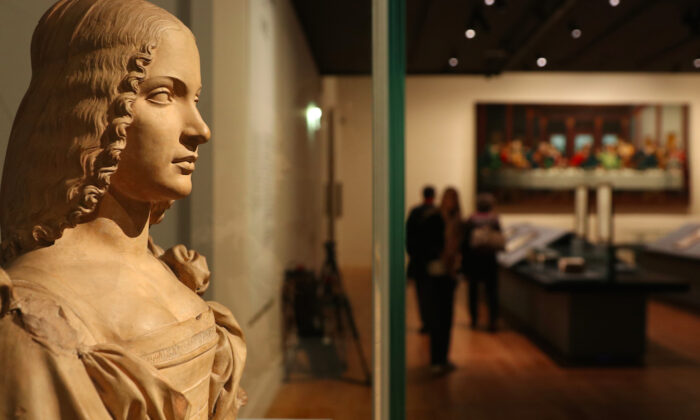 PARIS—The Gospel of John tells us that the apostle Thomas did not believe in the resurrection of Jesus until he saw and touched his wounds. Jesus actually invited Thomas to see for himself, but told him (in the New King James version), “Thomas, because you have seen Me, you have believed. Blessed are those who have not seen and yet have believed.”

The great Italian sculptor Andrea del Verrochio took 16 years to capture this scene in his bronze statue “Christ and St. Thomas.” Thomas is almost smiling, happy to see Christ again; one hand hesitates, searching for his savior’s wounds, but stops in mid-movement. What Thomas discovers on that day is his own doubt.

In 1467, the same year he started the statue, Verrocchio welcomed a new young student in his atelier. He was 17 years old, and the drawings presented by his father were promising; the youth seemed to have a future in painting.

And thus, seeing the statue in the studio and being face-to-face with Thomas’s disbelief, the student saw, believed, and understood. His name was Leonardo da Vinci.

Like any other student, Leonardo didn’t touch any brushes during his first year—except to clean them. He was initiated into the methods of his teacher. Legend has it that Leonardo was charged with painting an angel on the canvas of “The Baptism of Christ.” The angel was so beautiful that Verrochio, upon seeing his young student surpass him, never picked up a paintbrush again.

In Quest of Perfection

Leonardo da Vinci attracts hyperboles. According to Louis Frank, curator of the new exhibition at the Louvre Museum, the number of books on Leonardo is “truly enormous.” The efforts from the curators are just as impressive.

It took more than 10 years of work for Louvre curators Louis Frank and Vincent Delieuvin to prepare the exhibition dedicated to the Italian genius. Transformed into diplomats, the curators had to seek permission from Queen Elizabeth for drawings from the Windsor Royal Collection, from Venice’s Accademia Gallery for the loan of the “The Vitruvian Man”—which was nearly refused to them—and from the Hermitage Museum in St. Petersburg, Russia, for the “Benois Madonna.”

From the Industrial Age, where his sketches of flying machines left people dumbfounded, to the film “The Da Vinci Code,” which explored the master’s secrets (such as mirror writing), Leonardo has become a legend through the centuries. The Florentine painter’s fame has conferred upon him a mysterious aura, as well as abundant literature.

Finally, the Louvre succeeded in gathering 140 of his works, including an impressive number of sketchbooks and studies. But painting seems to be most prominent here, over any other medium.

“We look at Leonardo today as if he were lost across an extraordinary labyrinth of scientific discoveries, yet painting was at the center of his life. It was his essential preoccupation. For him, it was elevated to the level of science. He used the expression ‘divine science,’” Frank explained.

“Some think that Leonardo didn’t like to paint, because he painted very little. But that’s false. All his life, he worked on paintings, and some of them were never finished,” he said.

The Christian faith isn’t explicitly referenced in Leonardo’s “Codex Urbinas,” his treatise on painting. But the nature of the divine had a particular significance for him, as for many of his contemporaries. It’s as if painting allowed him to attain and reach higher aims than those of mortal beings. In “Codex Urbinas,” Leonardo wrote, “The divinity which is the science of painting transmutes the painter’s mind into a resemblance of the divine mind.”

The Light of Divine Beings

Guiding the Gothic architecture of 12th-century cathedrals, the theology of light posited that stained glass windows were intended to transform ordinary, physical light into divine light in a way that it could penetrate the churches and be witnessed by and instruct all believers.

During the Renaissance, the momentum of Italian painters was unstoppable—their work surpassed all that existed until then. According to Arnaud Hu, professor of art history who also attended the exhibition, though other schools of painting existed outside of Italy—such as the Flemish School—the Italians were the sole ones to see the potential of painting to express light.

“The painters picked up on the Theology of Light, which inspired the creation of stained glass windows. And the work on light by the artisans of the cathedrals continued with the Italian painters. The goal was to make divine light visible to those looking at the painting,” Hu said. Several techniques, such as chiaroscuro, later popularized by Caravaggio, emerged. But always, the goal was to reveal the light of divine beings.

Leonardo thus created his famous “sfumato” (derived from the word “smoke”), an optical effect that smooths out the contours, and highlights the colors and lights of the characters being depicted.

In the case of Leonardo’s sfumato, researchers found multiple minute layers, measuring between 1 and 2 micrometers, superimposed on each other—layers so thin that it defies the imagination.

“The effect is mysteriously beautiful, of a great softness. What we see isn’t the mix of colors that the artist has applied from his palette, but the combination of colors through numerous layers of glazes,” Hu said.

This elusive light no doubt enhances the expression of the characters and the beauty of the scenes.

According to Frank, Leonardo learned how to capture the essence of life in motion, which means the contradiction between the human mind and one’s deepest feelings—as in his master’s statue of Christ and St. Thomas. The position of St. Thomas’s body’s suggests a deep impulse, a wish to join and greet Jesus, but his hand seems to hesitate. Looked at from a different perspective, it’s hard to say whether Thomas is smiling or is thinking of something else, as his doubt challenges him at that moment.

“In the context of religious paintings, Leonardo wanted to understand profound meanings. What was the state of mind of the Virgin when she saw Jesus play with the lamb, which symbolizes his sacrifice and his ultimate mission? Her smile is as joyful as it is melancholy. She tries to hold him back, but she understands that the lamb is his ultimate mission,” Frank explained.

When Leonardo went to France at the invitation of King Francis I—he would spend the last three years of his life there—he brought with him three paintings: the “Mona Lisa,” “The Virgin and Child With Saint Anne,” and “Saint John the Baptist.” These were three unfinished works that he would try, for the rest of his life, to finish—and perhaps, to understand.