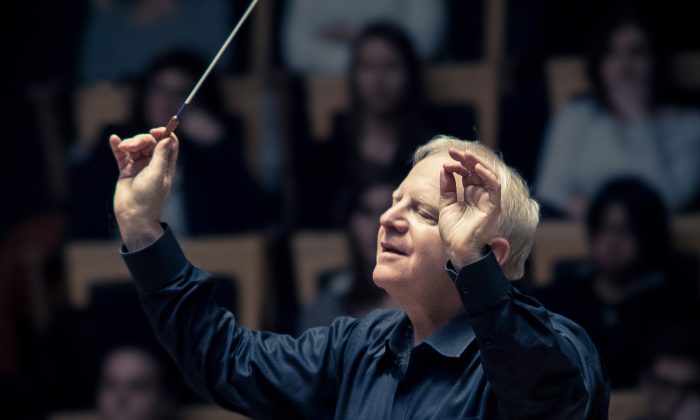 As conductor Leonard Slatkin prepares to leave his music directorships at the Detroit Symphony Orchestra and Lyon Symphony Orchestra, he already has his hands full with new projects to tackle, and ideas and places to explore.

Slatkin is constantly looking to the future and driven by curiosity. Over the course of his career, he has conducted most major symphony orchestras around the world, championed American classical music and composers, and pushed for people to have greater access to orchestras. Now he is finishing his second book, “Behind the Baton”; looking forward to getting back to composing music and arranging pieces; and planning to explore a long list of places around the world. At 72, he wants to be freed up for more creative endeavors.

A very important facet of the arts and creativity is individuality, he said by phone, yet it’s also something most at stake in our time.

Music is a window into the soul of mankind. Without using words, it’s something that reveals itself and reflects … the ethos of the time.
— Leonard Slatkin

Individuality is part of the reason works by Bach are timeless, and part of what will determine which of the works written today will still be played 50 or 200 years down the road.

“A great work survives because it is not like anything else,” Slatkin said. “They remind us of a time that is gone, and they are timeless because they have individuality.”

And thus, they spark one’s imagination.

But more and more, people are relying on the images they are being given instead of relying on their own imaginations, Slatkin said. You might think of the music video created for a song when you hear it again, or the movie version of a book you’re reading. Or, take the coverage of the 2016 elections, for example—many news consumers relied on one news outlet instead of several, and realized only after the elections that they never had a full picture.

“If our age [has] taught us one thing, in this first part of the 21st century, it is that we have relied too much on people telling us, as opposed to us finding out for ourselves,” Slatkin said. He fears we are dangerously close to  losing our imaginations, and encourages us to exercise that freedom.

“Music is a window into the soul of mankind. Without using words, it’s something that reveals itself and reflects … the ethos of the time,” Slatkin said. “[Music] takes us away from our everyday existence into a world of imagination.”

A main role of orchestras has always been and continues to be to preserve the masterpieces of the past and to help define what may become those of the future, Slatkin said. This role remains, but circumstances surrounding orchestras continue to change.

A few things in particular have Slatkin concerned.

Today, he sees a problem that interferes with the orchestra creating it own individual sound. Earlier in his career, as compared to today, music directors had more of a hand in shaping the sound of the orchestra, Slatkin said. They had more say over the audition process and over who to hire or keep on. Today with “blind” auditions, no one knows who the musician is behind the screen. These began in order to eliminate bias and increase diversity. But with no communication with the anonymous musician and without being able to consider the musician’s experience, the music director cannot consider a musician’s full body of work and potential. This creates a gap and interferes with creating the sound of an orchestra. More care should be taken to create that individual sound, he believes.

Another change is the mounting competition for eyes, ears, and dollars from all sides in the music world.

Board members face increasing pressure from the few regular donors to the arts, Slatkin said, because there are so many other—and worthwhile—causes that donors are giving to instead. On the other hand, musicians face great competition with all the other orchestras and ensembles that tour across the country as well. And it’s understood that the subscription model no longer works for most orchestras. So at some point, there’s a dollar value attached to how much the orchestra is worth to the community. The boards and musicians, sometimes not understanding the other side, negotiate an acceptable deficit.

Slatkin doesn’t claim to have the solution, but says changes will be inevitable.

Other changes come in the form of technology, like orchestras playing along with screens and films at a concert (which Slatkin figures is just a trend of the times) or live-streaming concerts online (which DSO does for free with every concert).

With all this access, the saying that everyone’s a critic comes to mind, reminding Slatkin of a Londoner who frequents these broadcasts.

“Even if it’s in the evening, he’ll stay up till two, three in the morning, watch the broadcast—I get up to my dressing room and I’ve got a review posted online,” Slatkin said. “It’s insane, but it’s good.”

Yet platforms and circumstances are changing, “and the role of orchestras will continue to change.”

Slatkin grew up in a musical family: His father was violinist-conductor Felix Slatkin and his mother cellist Eleanor Aller, both founding members of the landmark Hollywood String Quartet. His brother Frederic Zlotkin took up the cello and is now the principal cellist of the New York City Ballet Orchestra.

From a young age, Slatkin wanted to assert his individuality, so rather than dedicating himself to the violin or cello, and instead took up the viola for a period, and quite poorly, as he tells the story. His musical education was varied and continued, and it was in college that he finally made the step toward conducting.

Throughout all of this music-making, he always had the inclination to compose, Slatkin said. Then he got busy and just didn’t have the time.

“Then a couple of years ago, an idea hit me, and I had to sit down and write,” Slatkin said. He premiered it, was surprised to see it turned out pretty well, and then last year he wrote another piece.  “Once in a while you get a thought in your head, and you just want to put it down.”

Composing is a completely different world from conducting, where his mission is to imagine how Beethoven or Brahms wanted their music to sound, he said. When he does that, he is “in awe of the genius that exists.”

With composing, “this is the creative part, to see what’s inside me.”

It’s a bit like cooking, which he enjoys. You think up ideas, throw in some of this and that, and bring what you imagine into reality. It is a form of communicating all these thoughts inside of you, without needing words.

“That’s what music is, this window into the soul,” Slatkin said.