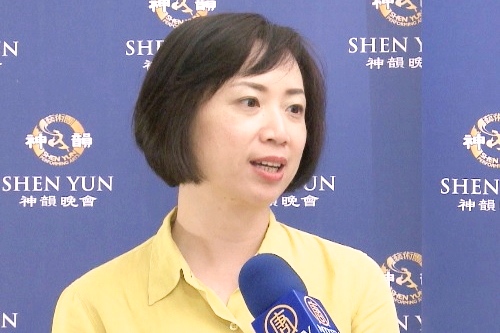 TAICHUNG, Taiwan—Legislator Ho Hsin-chun attended a sold-out Shen Yun performance presented by the New York Company, at Taichung Zhongshan Hall, on March 19, 2015. Delighted by a feeling of being on the scene in person, she exclaimed, “It’s indeed amazing! It’s beyond what I imagined.”

“Through the advertisement on TV and others’ introduction in the past, I came to know that Shen Yun is very beautiful. But seeing the show in person today, I found it amazingly remarkable.”

According to their website, Shen Yun Performing Arts uses state-of-the-art graphics technology in their backdrops, creating vividly animated settings to support the dancers on stage.

“The high-tech animated backdrops are perfectly synchronized with the dances,” she said.

“Every piece is well choreographed, and the entire show is very diversified. Not only can we see folk dances of ethnic minority groups and the dance of aboriginal tribes, but we can also see Mongolian chopstick dance. These are something that we seldom saw in the past.”

Talking about one of the pieces that impressed her, she said, “Shen Yun uses dances to depict the story of Capturing Arrows with Boats of Straw in the classic historical novel Romance of the Three Kingdoms. The perfect blend of performance and the digital animated backdrops, a kind of innovation.”

“If Shen Yun returns, I’ll see it again, even every year. I’ll hope to promote it to all the people in Taiwan, telling them that Shen Yun dances are truly wonderful,” she concluded.

“One of the themes of the performance, abandoning evil and encouraging goodness, should be promoted more,” said Huang Ho-Ting, director general of Labor Affairs Bureau of Taichung City Government.

Ms. Huang said, “Such theme can bring confidence to people and a calming force to an unstable society.”

As a government official, Ms. Huang said she was connected to the dance The Power of Compassion. “A faith based on compassion and using compassion as a guidance are very important for Taiwan. We need to bring back compassion.”

Ms. Huang explained that government officials, while carrying out official policies, can be more compassionate towards the citizens by taking more effort to understand their needs.

The landscapes of China are brought to live with Shen Yun’s unique animated backdrop designs, which “complement and synchronize all aspects of the performance: the characters, colour of the costumes, specific dance movements, props, lighting,” according to Shen Yun’s website.

“I want very much to go dancing on stage,” said Ms. Huang in comment about how vivid and lifelike the backdrop is.

‘I am so touched’

“I have always been very curious about why so many outstanding dancers decide to join Shen Yun, which is based in New York, and why they remain committed to the art of classical Chinese dance after so many years,” said Chang Chih-Hsiang, director of the Land Administration Bureau of Taichung City Government.

Ms. Chang said, “I am so touched being able to finally see it today.”

Shen Yun is is inspired by 5,000 years of the Chinese civilization, and story-dances in the program highlights values such as compassion, loyalty, kindness and bravery, which lie at the heart of the Chinese culture.

“I believe Shen Yun want people to believe in how gods always help the good people, as long as people can look at things with a positive mind-set,” said Ms. Chang. “Just like how the fairies and gods look after people in the stories.”

Ms. Chang said that she began looking into herself after the performance—was there a lack of compassion in how she treated others and was there any room for improvement?

“Such a performance allows people the chance to reflect on themselves.”

Though it was hard to book a ticket for Shen Yun Performing Arts New York Company’s premiere in Taoyuan City on the afternoon of March 18, Cai Shiyan, director general of Civil Affairs Bureau, obtained tickets for Shen Yun and went with his wife. “It’s really amazing. … Shen Yun contains profound inner meanings from the viewpoints of the humanity, arts and innovation,” said Cai Shiyan.

He added, “We should encourage our staff to watch Shen Yun each year, as it can uplift their morality.”

Cai Shizhen used to run his own business in the field of sound equipment, so he especially appreciated Shen Yun Performing Arts’ seamless integration of live orchestra, dance and dynamic backdrop. He said, “The overall coordination of Shen Yun Orchestra, backdrops, sound effects and lighting is perfect. This is a delicate and unique form of presentation.”

“Shen Yun can help the world toward peace. When one finds his own compassion, there will be the new epoch of humankind.”

‘So delicate and exquisite’

He said, “Performers’ dancing skills are so delicate and exquisite. I was amazed by the perfect synchronization of the performance and the backdrops. The legendary stories are vividly demonstrated. It is the first time that I’ve ever seen this kind of performance. More importantly, each piece has a theme. This is not easy!”

“Shen Yun showcases the essence of culture, with deep connotation of compassion. This is something very rare nowadays,” he said.

Through dance, song, and live orchestral music, the performance brings to life legends and heroes from China’s long and rich history.

“I highly appreciate the show reviving the culture and demonstrating the human nature of truthfulness and compassion,” Mayao Gumu said.

Mayao Gumu said that the overall beauty of Shen Yun artists is incredible. He explained, “The dancers’ facial expressions are beautiful. It is a soft kind of beauty. The entire coordination is beautiful.”