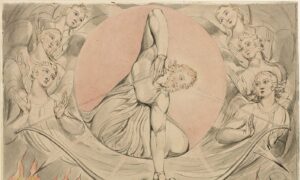 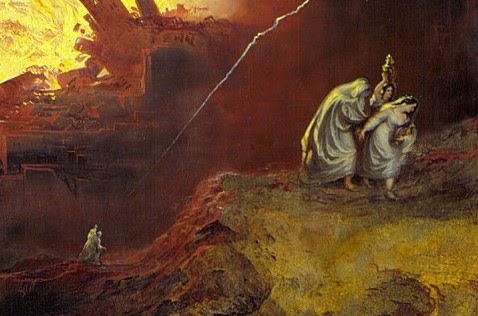 Lot's wife turns to look back upon the evil and perishes. Detail of “The Destruction of Sodom and Gomorrah,” in 1852 by John Martin. Oil on Canvas, 53.6 inches by 83.5 inches. Laing Art Gallery, England. (Public Domain)
Fine Arts & Craftsmanship

Leaving Evil Behind: ‘The Destruction of Sodom and Gomorrah’

It’s hard to deny that there are consequences for our actions. The consequences of a person’s actions can affect not only the person who commits the action but the person’s immediate environment as well. Our home, family, and friends can all be affected by how we decide to behave.

Multiply the consequences of one person’s actions by the actions of a community, and a whole city, state, or country can be affected. The story of the cities Sodom and Gomorrah are examples of when the behavior of two communities, because their wicked nature, leads to those communities’ destruction.

God sends two angels to Abraham’s nephew, Lot. Lot accepts the angels into his home with hospitality, but a wicked mob gathers outside of Lot’s house and demands that he hand the angels over to them. Lot offers his daughters instead, but the mob insists on taking the angels. The angels respond by striking the mob with blindness.

It is at this point that God, witnessing no one with a righteous heart except for Lot and his family, finds cause to destroy the cities. The angels instruct Lot and his family to leave and not look back. Sulfur and fire fall on the city and its wicked inhabitants. Lot’s wife looks back to witness the carnage, and she is turned to a pillar of salt.

John Martin was a 19th-century painter who was best known for his religious landscapes and cityscapes. In his painting “The Destruction of Sodom and Gomorrah,” Martin shows the moment in which Lot and his family are leaving the burning cities.

The left side of the composition displays the burning cities in the background. If we squint at the image, we will see how dark the cities are compared to the brightness of the yellow flames that suggest intense heat.

The high contrast between the darkness of the cities and the bright fire adds a dynamism that would otherwise be absent. Smoke overhangs the cities as if it is a chamber in which the fire can burn even brighter. This smokey cloud swoops from left to right and also increases the energy of the composition.

At the bottom of the cities, splitting the composition in half, we can see Lot’s wife. She is shown looking back at the burning cities, and lightning strikes toward her from the upper-right quadrant of the composition.

At the lower-right quadrant, the rest of Lot’s family is shown escaping to safety. They keep their heads down and their eyes forward. The environment to which they escape contains less and less contrast.

Keeping Our Spirit Bright and Leaving Evil Behind

When looking at Martin’s “The Destruction of Sodom and Gomorrah,” I immediately think what this might mean for my inner world, my heart and mind, my character. For me, the cities are representations for the consequences of my actions—not only to my environment but also my soul.

Which of these, virtue or vice, constitutes the current makeup of our souls, the makeup of our hearts and minds? Maybe both are present, and if both, which is dominant?

Martin’s composition depicts the cities as very dark compared to the flames that destroy them. This high-contrast scene makes me consider the stark difference between virtue and vice, and that the flames, representing virtue, always have the ability to engulf and destroy the evil of vice. Evil stands no chance in the presence of righteousness.