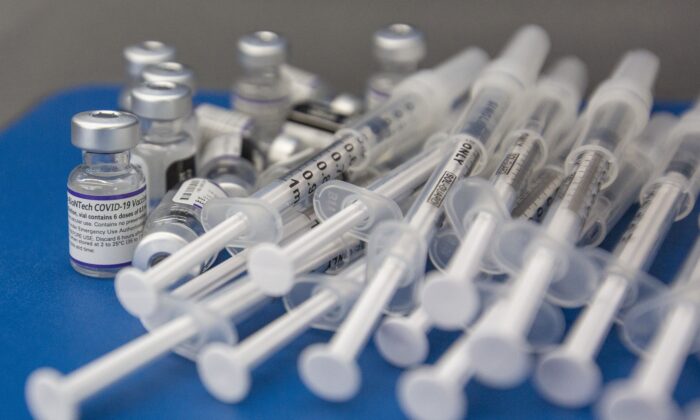 Syringes and vials of Pfizer-BioNTech COVID-19 vaccine are seen on a work surface during a drive-through clinic at St. Lawrence College in Kingston, Ont., on Dec. 18, 2021. (The Canadian Press/Lars Hagberg)
Canada

Alberta-based lawyer Derek From wanted to be able to serve his clients better, so to comply with public health requirements he decided to get COVID-19 vaccination—despite having misgivings.

“I was really hesitant,” From told The Epoch Times. “But at that point, I knew I had clients that I would potentially end up in court in the coming months, representing them. And so I thought I need to go through and do this, otherwise I won’t have a job.”

Soon after, however, he began to have problems with his left ear, he says, and within about 10 days of getting the Pfizer shot, he had “quite dramatic” hearing loss in that ear.

“I was in my home studio doing some work and I realized that I couldn’t hear on my left side,” said the lawyer, who is also a musician and an audio engineer. “I’m sitting in front of my monitors, trying to do critical listening and do work for clients, and I just can’t do it. Like, it’s gone.”

From said he went to see his doctor and suggested the hearing loss could be caused by the vaccine.

“My GP, who’s a wonderful doctor, got really nervous when I said that,” he said. “He’s like, ‘Oh no, it couldn’t be that. It’s very common that people just lose their hearing on one side for no reason.’”

Having been involved in COVID-19 policies since the beginning of the pandemic, including advocating on behalf of paramedics and firefighters who sought to challenge Alberta’s vaccine mandates, From said he understands his doctor was put “in a tough position” and was probably under pressure from the college of physicians.

From’s doctor did, however, refer him to an audiologist. “The report came back [with] 63 percent hearing loss in my left ear,” From said.

“If you’re familiar with frequency ranges, right around one kilohertz, between one and two kilohertz, it drops off precipitously and I basically have no hearing after that.”

WHO Report on COVID Vaccines and Hearing Loss

In a recent newsletter, the World Health Organization (WHO) reported that based on data gathered up to Feb. 22, 2021, 164 cases of hearing loss and 367 cases of tinnitus—commonly known as ringing in the ears—from different countries may be associated with COVID-19 vaccines.

The findings showed that the majority of people who reported experiencing hearing loss had taken the Pfizer vaccine.

“The most reported COVID-19 vaccines in these cases were Pfizer/BioNTech (142 cases), followed by Moderna (15 cases) and AstraZeneca (7 cases),” said the newsletter, with onset varying between several minutes to 19 days, but most commonly within a day of the jab.

The cases were from 10 countries including the United States, Italy, and the UK, which rolled out the Pfizer vaccines in December 2020.

WHO also noted that hearing loss is not included as an adverse reaction on the product labelling for COVID-19 vaccines, while tinnitus is listed only for the Janssen vaccine.

The WHO report noted that as “there is still only limited data in the literature [providing] evidence for this link, further monitoring is required.”

From, who was diagnosed with “sudden onset hearing loss,” said his doctor was surprised when he showed him the results of the audiogram, as neither From nor his family have any history of hearing problems or deafness.

The doctor prescribed prednisone, an oral steroid, but From said he “bloated like a balloon” from the drug and it wasn’t effective in restoring his hearing.

Treatment by an ear, nose, and throat specialist, including injections into his eardrum, was also ineffective.

He said the hearing loss has not only affected his work but his life in general, particularly when he is out in public where he has to consider where he’s positioned in order to be able to properly listen to conversations.

“I have to make sure people are on my right side,” he said. “And then it’s really hard for me to hear consonants.”

He now says getting vaccinated “was an absolutely huge mistake. I thought the risk was acceptable. Turns out for me, it wasn’t.”

From says the COVID-19 vaccine mandates imposed by the federal and provincial governments and the refrain that the vaccines are “safe and effective” are a disservice to Canadians.

“There’s no way they could have known that [the vaccines were safe], based upon the timelines of the vaccines’ development and testing. That was just a lie to get around people’s concerns and pushback from the public that the public needs to have choice,” he said.

“Public officials have done everything they could to take choice away from people. … Speaking as a lawyer, I think what they’ve done is illegal, but I’m unsure in the current legal climate what the courts would say about that. But if this were 2018 before any of this happened, this would have very clearly been struck down by the courts as an illegal act, actions by public officials.”

Editor’s note: This article was updated to add data from a Nov. 18, 2021, addendum to the WHO report.