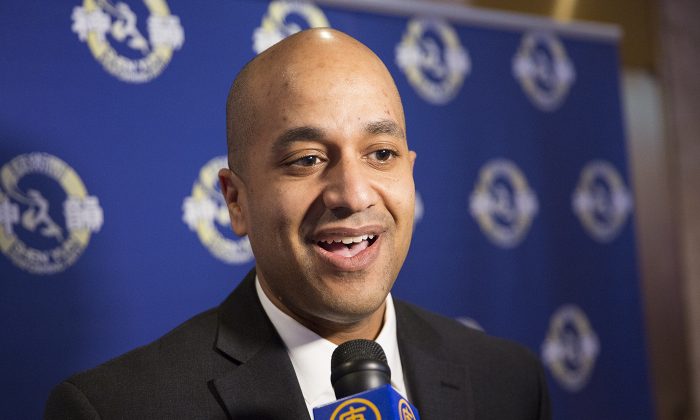 Lawyer Joel Etienne enjoyed and appreciated Shen Yun Performing Arts’ presentation of 5,000 years of Chinese history and traditional Chinese culture through dance and music, at the Sony Centre in Toronto on Jan. 22, 2015. “Shen Yun for me is a fantastic experience,” he said. (Evan Ning/Epoch Times)
Company

“Shen Yun for me is a fantastic experience,” said Mr. Etienne enthusiastically.

“And I can’t get that anywhere as an ensemble.”

Mr. Etienne is the Principal at Joel Etienne Barrister & Solicitor, and his specialty is immigration and regulatory law. He is also a former radio and television broadcaster and a frequent guest on Toronto CBC radio and TV.

Shen Yun does provide the total package. It features the world’s foremost classically trained dancers, unique orchestra blending East and West, and spectacular animated backdrops all together in one glorious performance.

The historical aspect comes from Shen Yun’s mission, which is to revive the authentic 5,000-year-old traditional Chinese culture through music and dance.

The basis for Shen Yun’s performance is classical Chinese dance, a discipline that has been passed down for thousands of years and has become a complete system of dance with unique movements, rhythm, and inner meaning.

Through classical Chinese dance, Shen Yun performs mini-drama pieces that draw upon the stories and legends spanning China’s history all the way to the modern day.

Mr. Etienne was thrilled by how one can see the traditions that are thousands of years old through the Chinese history that Shen Yun presents, including ancient values that have relevance today.

“That gives you such a great way to look forward because you understand the universal values of truthfulness, of compassion, of tolerance. It’s all put together historically and then you can see how it works in terms of our future,” he said.

Mr. Etienne explained that, if it weren’t for Shen Yun, the ancient Chinese culture could be lost forever. The melodies, the dancing, the song that make up the culture, as well as the respect for the divine, have all been suppressed over decades of communist rule.

“I see them really as preservers of human culture, of authentic thousand-year-old human culture,” said Mr. Etienne about what Shen Yun is doing.

“It’s a way to look backwards, understand our human history, and to look forward.”