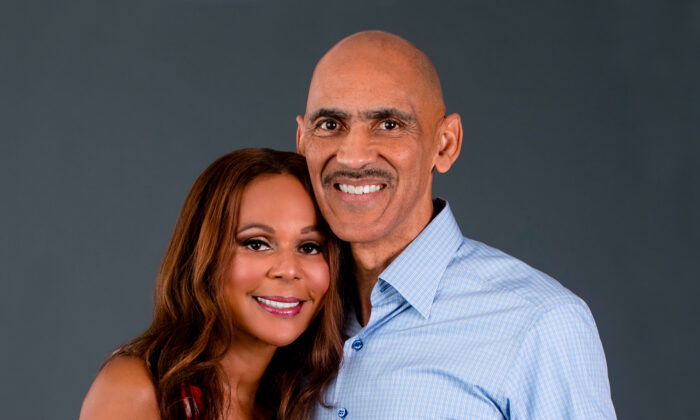 Tony Dungy might be best known for being an NFL player, coach, and Hall of Famer, but he’s also always made clear that his heart really lies in family and faith. Tony is the spokesperson for the national fatherhood program All-Pro Dad, he and his wife Lauren run the Dungy Family Foundation, and Lauren is an early childhood specialist and mother of 10. The two of them, who have authored books separately and together, recently started writing for children, with two more books released this year.

“There are so many opportunities to do something other than read,” Lauren said. “So we didn’t want reading to be a punishment and to be looked at as that, but to write books that kids would read and be able to relate to the stories and enjoy it.”

“The best way to reading is just by modeling—kids see us reading, they see us enjoying books, talking about the stories and characters, and they want to jump in on the action. They want to be read to, and they want to read books and talk about their stories to us,” Lauren said. “So it’s become something they do every day.”

It all started while Tony was coaching in Tampa, Florida. Lauren and other wives would read to young children in elementary schools on Tuesdays. They soon realized it wasn’t that easy to find books that were entertaining and had a good message, and showed diverse characters. As parents, they were also looking for interesting books their children would like and that had good messages and topics.

Central to the Dungy’s children’s book project is those messages.

“I think we want our kids to grow up being good friends, and being good citizens. We want them to grow up understanding that God has a plan for them, and that they’ve got to follow the Lord if they really want to be truly fulfilled,” Tony said.

“But more than anything, I think what our parents taught us is that it’s not what you do in life that’s important, but how you do it, and who you do it for,” he said.

As for choosing which topics to tackle, with eight kids at home, it wasn’t difficult.

“We really want them to really find out about problems and everyday things that they face. We wrote about being a friend, and honesty, and listening to your parents, and peer pressure. Just things that our kids come home with and they want to discuss with us—those are the things we write about,” Tony said.

“We have eight kids in the house right now, and they’re always coming home with, ‘Well, so-and-so used to be my friend, but they did something today, so I’m not going to be their friend anymore.'”

“So we said, ‘That’s so common with young kids, how can we talk about that?'” Tony said.

They wrote “Carson Chooses Forgiveness,” in which a young boy who loves basketball feels overshadowed by the team’s star player, who starts showing off and hogging the ball. The team retaliates, but Carson only feels worse. With the coaches’ help, the team finds a way to make things right.

“We also had to make sure all of our books included adults that can serve as support—mentors—and help them, guide them through the problems so that they wouldn’t have to deal with the problems on their own, or look to their friends,” Lauren said.

The Dungys make cameos in the books as well, as coaches of various athletic teams. Supportive adults who impart their wisdom are important, as Lauren said, because oftentimes children do try to sort things out on their own, or with the input of friends, but sometimes they don’t get positive results.

“But when they have someone who is strong and has experienced some of those things, then the kids feel supported in walking through this challenge,” Lauren said.

Lauren and Tony were introduced by a church pastor, and Lauren was at first skeptical.

As she wrote in their book “Uncommon Marriage,” she turned to her mother to share the news that the pastor wanted to introduce her to a football player. “He’s supposed to be a Christian, but you know I would never go out with an athlete.”

She finally agreed to meet him with her family, and found he wasn’t what she expected. “Tony was smart and respectful, and he had gorgeous brown eyes. He was not at all how I’d pictured a professional football player and coach. He seemed like a nice person.”

Lauren had always wanted a big family; they had three children, and adopted eight. Adoption was never a foreign concept; many people in their church adopted or fostered children.

When one of the coaches with the Buccaneers was in the process of adopting, he had asked for the Dungys’ support, and in the process, the Dungys learned about the need for adoption in Tampa.

There’s scant literature that discusses adoption in a loving, accessible way, so the Dungys took on the topic for another book in their series: “We Chose You.”

When the couple talked to their own children about adoption, they remembered they didn’t have any books to refer to.

“We wanted to introduce that subject at an early age, but make it so that it was not something that was a secret or something to be ashamed of,” Lauren said. “And the response has been very favorable. Many parents appreciate having this tool, this book to share with their own child.”

The book was meant to be of help to both parents and children, who may be, as the protagonist of the book is, questioning why his family is unlike his schoolmates’.

“God brought them to us in a different way than a lot of other kids, but still in His plan, that their birth parents loved them and really wanted to see the best for them, and God’s plan was just that they grow up in our family,” Tony said. The couple also hopes that, in a way, it can encourage other families to adopt and bless a young person with a permanent home.

“We believe that God forms families many different ways, and adoption is just one of them,” Lauren said. “We want all kids to know that they’re planned for, they’re special, and they’re in their forever homes when they’re adopted.”