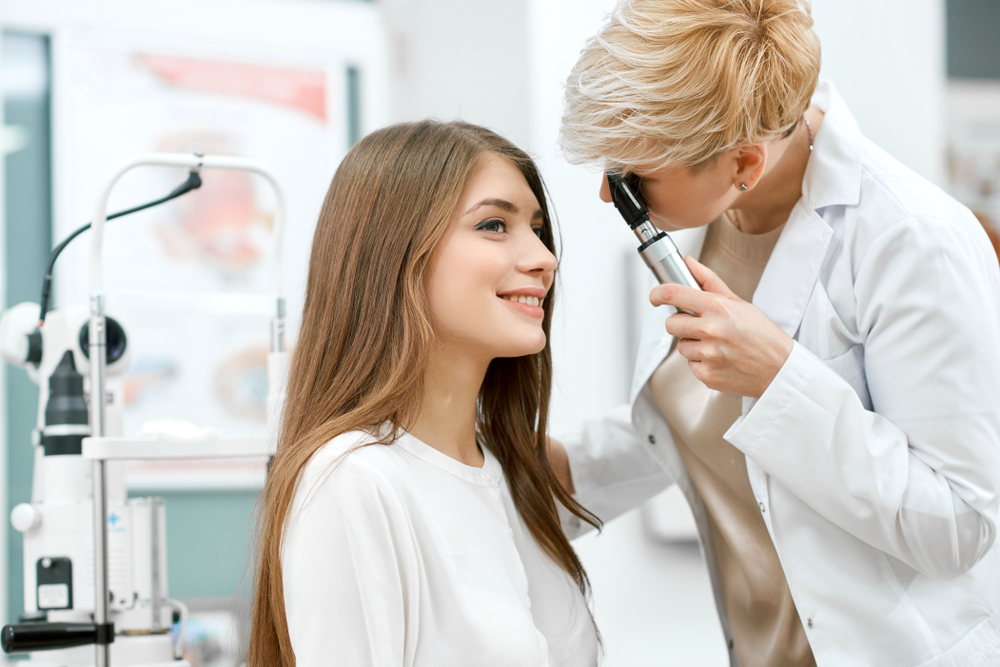 Annual eye exams are recommended in order to maintain eye health and determine if any type of correction is required. (Serhii Bobyk/Shutterstock)
Style

Technology affords several ways to correct our ability to see; is one right for you?
BY Bill Lindsey TIMEAugust 18, 2022 PRINT

Our ability to observe the world around us is surely one of our most valuable natural abilities. Because not everyone enjoys clear vision from birth, great efforts have been undertaken to improve vision, most recently in the area of surgical options.

But let’s first take a look at how we got to this point.

The Romans are credited with the development of the magnifying glass, and in the 13th century, the first eyeglasses were created by Italian craftsmen by setting lenses into a frame that could be perched on the bridge of the wearer’s nose or held in front of their face. Said to initially be widely used by monks, examples can be seen as accessories in some early Renaissance paintings of scholars who saw them as a mark of intellect and prosperity.

An important step in the quest for improved vision occurred in the late 1700s, when a British instrument maker named Benjamin Martin created reading glasses called “Martin’s margins,” which featured a metal frame held in place by hoops that went over the wearer’s ears.

In 1784, eyeglasses took a quantum leap when Benjamin Franklin invented bifocal eyeglasses. Franklin described his invention as “serving for distant objects as well as near ones, making my eyes as useful to me as they ever were.”

Contact lenses are often considered to be a relatively recent development, but it was in 1508 that Leonardo da Vinci illustrated the contact lens. In 1887, the first contact lens, made of glass, was crafted, but plastic versions didn’t appear until 1948.

A huge improvement in vision correction via surgical procedures took place in 1974—by accident. Svyatoslav Nikolay Fyodorov, a Russian eye surgeon who had implanted the world’s first artificial crystalline lens and was a pioneer in the treatment of glaucoma, was treating a young boy who, due to an accident, had shards of glass in his eye. Fyodorov removed the shards by using a scalpel to shave off a sliver of the damaged cornea.

During the recovery period, the boy, who was severely nearsighted prior to the surgery, reported significant improvement to his vision. Fyodorov realized that by reshaping the cornea, vision improvement was possible, thus leading to the creation of the radial keratotomy (RK) process of vision correction. Fyodorov went on to take a ship around the world to provide RK treatments to as many people as possible.

On a related note, in 1948, a Spanish ophthalmologist named José Barraquer Moner created a treatment in which slivers of the cornea were removed to improve vision. Moner went from using a scalpel to a device called a microkeratome, a surgical instrument utilizing an oscillating blade, designed specifically to create the corneal flap required in laser eye surgery.

In 1989, this surgical process was further improved by utilizing a laser instead of a blade. Laser-assisted in situ keratomileusis, better known as LASIK, received Food and Drug Administration approval in 1999. Since then, more than 10 million people diagnosed with nearsightedness, farsightedness, and astigmatism have had the treatment.

There are currently three surgical procedures that utilize lasers for vision improvement. The original process is photorefractive keratectomy (PRK), in which the surgeon uses a scalpel or laser to completely remove the epithelium, the outer layer of the cornea, before using a laser to reshape the cornea. The surgeon then fits a nonprescription contact lens to keep the treated area clean. Recovery time is typically one to two months, with some eye pain and eye dryness afterward not uncommon.

PRK has largely been replaced by LASIK, which has become the most widely used process. In LASIK, many surgeons rely on extremely sophisticated, robotic systems in which no needles or scalpels are required to make corneal corrections.

One such surgeon is Dr. Corey Lessner of Millennium Laser Eye Centers in Fort Lauderdale, Florida. Lessner starts by mapping each eye to determine the required adjustment. In the first of two steps, after numbing anesthetic eye drops have been administered, an extremely precise femtosecond laser is used to create a flap on the eye’s surface. In the second step, an excimer laser sculpts the cornea to allow improved vision.

During the process, the patient reclines in a comfortable seat; the entire surgical procedure takes about 15 minutes to make corrections in both eyes, with immediate results and a recovery time measured in hours, often with no discomfort.

In the interest of full transparency, I underwent this procedure 10 years ago, entering severely nearsighted, and enjoying 20/20 vision 15 minutes later.

The third, and most recently available surgical option is called small incision lenticule extraction (SMLE), in which, rather than LASIK’s two lasers, only one is needed to make a very small incision in the cornea and then do the actual reshaping. The process requires about 30 seconds per eye, with a recovery time similar to that of LASIK. But SMLE can only be used to correct nearsightedness.

Seeing clearly has never been so approachable.