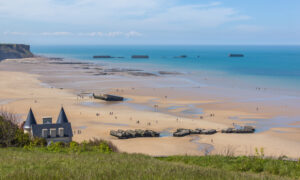 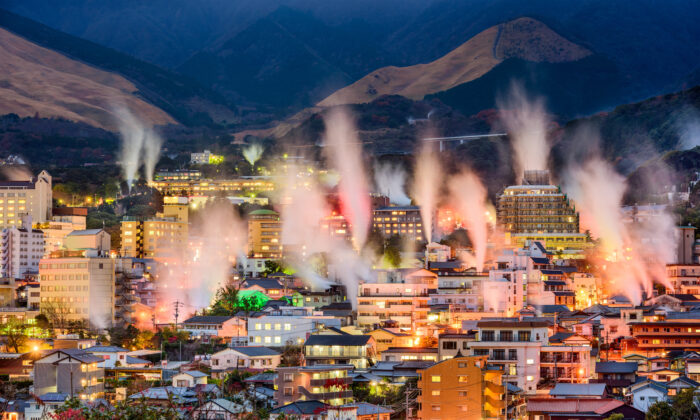 The heat—I’ll always remember the heat. Total, all around me, consuming, baking my body like a bit of steak in a sous vide. Climbing into a long, shallow hole dug by two industrious women, they quickly began covering me up, shovel by shovel, until almost everything, arms, legs, even neck, was underneath.

With only my face and the top of my head emerging from the black, volcanic soil, I quickly began to sweat, the perspiration trickling down my face and disappearing into the ancient dirt. They told me it was good for me, great for the skin—a restorative process. Stay submerged for 15 minutes, minimum. But after 10, the heat still rising, I was ready, shaking off my sand bath and headed to rinse off in the onsen (the hot spring).

I was on Kyushu, the southernmost of Japan’s main islands, and a land of hot springs, geysers, and bubbling geothermal activity. Home to the country’s most active volcano, the 5,200-foot Mount Aso, it’s also subtropical, lush, and green with beaches and palm trees. And there’s a long history here, too—the closest island to the Asian mainland, Kyushu was home to Japan’s only major connection to the outside world during the centuries of “sakoku,” when the country closed between the 17th and 19th centuries.

Riding the bullet train down from Tokyo, I arrived in Beppu, a small, mountainside city of about 120,000. A place famous to the Japanese, it remains little-known to international tourists. Here, some 2,000 hot springs flow, all over town, and vents along the sides of streets steam forth all day long, releasing just a fraction of all that roiling, boiling energy down below through pipes and chimneys and simple holes in the ground, giving the impression that the town is on fire, all the time. (Of course, in some ways, it is.)

First up? The sand bath. While some opt to do this on the beach, next to the sea, my first night in town was rainy, so I headed to Takegawara. Recognized as a national historic landmark, this building, which today resembles a shrine, was originally built in 1879, over an onsen, where bathers originally gathered in tubs of stone. Rebuilt three times, it was completed in its current form in 1938.

In Japan, which has 27,000 onsens, tradition says that ancient gods were healed by the power of these springs. A strict protocol governs the washing routine that must take place before you enter the baths—any traces of dirt or soap aren’t tolerated. Bathing is generally segregated by gender, and you won’t find any swimsuits in sight—these are baths that you must enjoy in the nude.

After perching on a small stool and showering thoroughly in Takegawara’s small locker room, guests don a “yukata,” a lightweight summer robe, and proceed into a room filled with black, steaming soil. This ritual has been practiced by the Japanese since the Edo period, which began in the 17th century. Infused with minerals, the sand, which can reach temperatures of 130 degrees, is jam-packed with minerals. Known locally as “suna-mashi,” it’s said to help everything from diabetes to asthma to anemia.

But there’s more to Beppu than the sand, including the Hells. A series of seven pools connected by pathways and bridges, each one of these hot pools has its own theme, with temperature readouts that top 200 degrees Fahrenheit. Super-enthusiastic guides shout out facts and commentary at each stop, but pretty much all of the interpretation is lost in translation, for me.

But with each turn of the corner, you’re presented with a distinct experience, from bubbling mud pots at Oniishibozu Jigoku to the Japanese version of Old Faithful, the geyser at Tatsumaki Jigoku, which shoots into the air for about 10 minutes, every half hour or so. Strangest of all is Oniyama Jigoku, where a sign informs visitors in English and Japanese: “The force of the steam is so strong here that about one and a half train cars can be pulled by its pressure, and it creates ideal conditions for breeding crocodiles.”

Coming as billed, the pool is filled with crocs, who nose right up to the edge of the walkway, safely fenced in.

Nearby, you can order lunch at what looks like an ordinary snack bar, except instead of grills, food is placed in wooden boxes and heated over a stone oven that channels the geothermal power down below. While the menu is entirely in Japanese, helpful photos illustrate what’s on offer—chicken, fish, rice, dumplings. Point out your selection, and wait just eight minutes for the busy staff to serve it.

An island that’s relatively small and extremely mountainous, Kyushu is easily traversed by trains, which curl along the sides of deep valleys and thunder through countless tunnels. Fukuoka, north of Beppu, is the largest city on the island and a pleasant place, home to a good art museum and a castle, plus a big park where visitors idle away the afternoon in pedal-powered swan boats.

Just to the south, in Nagasaki, Peace Park flows with fountains and includes several monuments, all of it remembering the fateful day in 1945 when a nuclear bomb destroyed a huge swath of this city. A graceful, 33-foot statue points to the sky, mindful of unseen threats from above.

There’s a wharf with restaurants, right on the water, and a gondola that takes you to a mountaintop, the sweep of the city at your feet. And it was here, on the fan-shaped artificial island of Dejima (literally, “Exit Island”) that Japan remained connected with the outside world during the Period of National Isolation from 1641 to 1859. Originally constructed to provide a place separated from the city to facilitate trade with the Portuguese, Dejima was Dutch for most of this period, bringing in silk and cotton, with ships ferrying Japanese silver, copper, and porcelain to Batavia—present-day Jakarta. A walk around the reconstructed trading post takes you back in time, a slice of the Netherlands on the other side of the world.

My journey to the island ended at the end of the line, rolling into the city of Kagoshima on the bullet train. It’s a dramatic city, the high rises of the downtown skyline dwarfed by the three peaks of Sakurajima—the puffs of steam emanating from the top a constant reminder that this is still a very active volcano. After a walk around town, I took a smaller train to a ryokan (a traditional Japanese Inn) nearby, and before long I sought a little more heat.

After a 10-course dinner, satiated and tired from a day on the train, I retired to my room, whose balcony was dominated by its own private hot spring bath. I stepped in the water, the light of a long evening fading, the warmth of Kyushu surrounding me, immersing me in the wonders of this island.