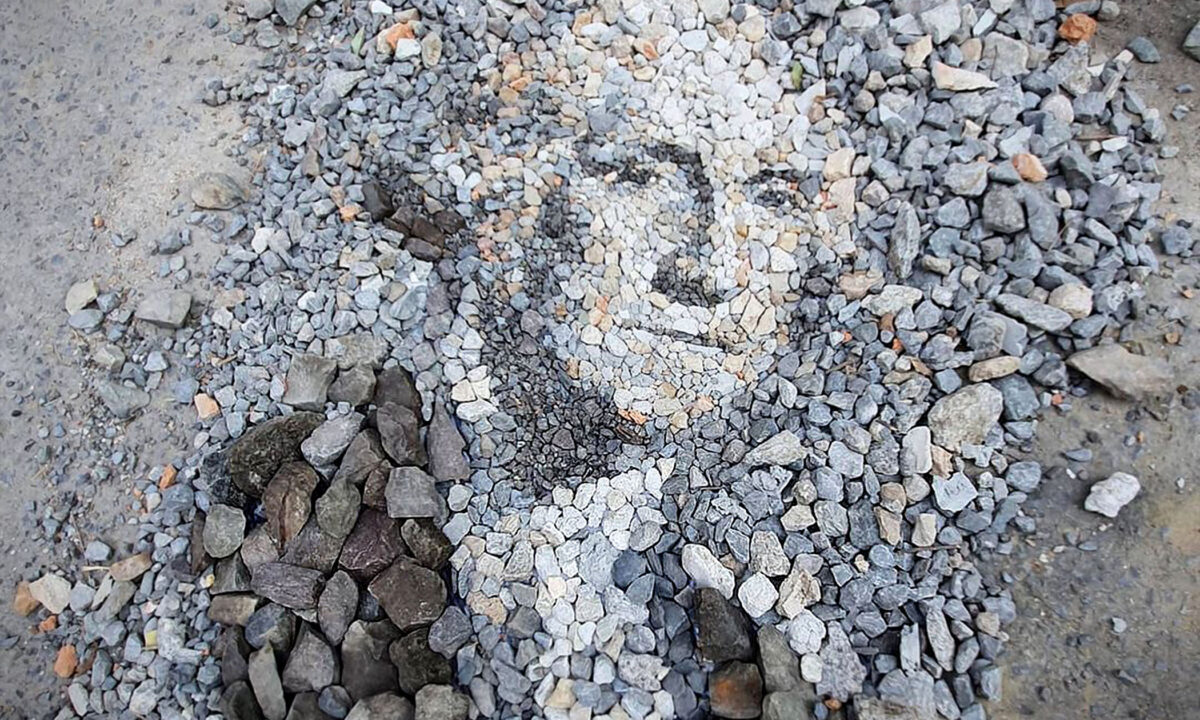 Inspired by esoteric Tibetan sand mandalas and their corporeal impermanence, one UK-born artist uses natural landscapes as his canvas, and paints with pebbles of various colors, shapes, and tones to portray earthwork likenesses of Michelangelo’s David and Mark Zuckerberg—a challenging juxtaposition to be sure, but incredible to behold and no less beautiful.

That artist, 45-year-old Justin Bateman, now based in Chiang Mai, Thailand, believes that artwork should connect with our natural environment, and draws inspiration from land art sculptor Andy Goldsworthy and Philip Guston, who challenged the notion of “high art.” And so, Bateman set off into the forests, jungles, and beaches of Thailand and Indonesia to create his colorful, mosaic-like masterpieces.

“It begins with meditation,” Bateman told The Epoch Times. “Both suitable site and stones must present themselves. If the subject, site, and stones do not align, the work is not made. If they do, then I begin by creating color maps of the subject.”

Bateman often “paints” in stone old masterpieces from art history, such as works by Michelangelo, Leonardo’s La Scapigliata, a Rembrandt self-portrait, a Raphael cherub, and Botticelli’s Birth of Venus—all of which betrays an awareness of art’s cultural content.

The subject matter for Bateman’s pebble portraits arises from a sense of spontaneous human “curiosity” rather than a mere contrived ideology. Like ephemeral Tibetan mandalas, Bateman’s philosophy transcends mundane, worldly troubles. “Instead of worrying about finances or world order etc., I can focus on locating a particular hue or tone of sepia,” he said jokingly. “In some ways, it is a mindful practice, but that’s not to say it isn’t without its own issues! I just prefer these issues to worldly ones.”

He describes his creative process: “There are so many unknowns and variables. I am on the journey with the work, the outcome is as unknown to me as a spectator watching the process. I start with a test, making the eyes, if the eyes don’t work, the piece must be abandoned … The work must establish a soul.

“As the pebbles become pixels, there can be many surprises. Sometimes the stones can interlock in very satisfying ways, at other times it is like forcing a poorly made jigsaw together.” Like nature’s creations, Bateman’s earthworks are fleeting. After toiling for as few as 3 or as many as 30 days to produce a splendidly detailed likeness, the visage will adorn its agrarian gallery without walls, for passersby to marvel at in wonder, until it’s eventually reclaimed by the earth.

Bateman’s “pebbles are my pixels” portraits—as goes his motto—are nevertheless an outlier in the long line of mosaic tradition, he acknowledges. “Historically, there have been strict rules around mosaic practice,” he said. “Around 200 B.C., more random stones were being replaced by materials cut into a cubical or regular shape. In mosaic practice, this is called ‘tessera.’ The most common material became marble, for its durability and gloss finish when polished. My work returns to a more ancient practice. I guess you could say it is the sculptural equivalent to cave painting!”

You can see more of Justin Bateman’s work on his Instagram pebblepicassos.