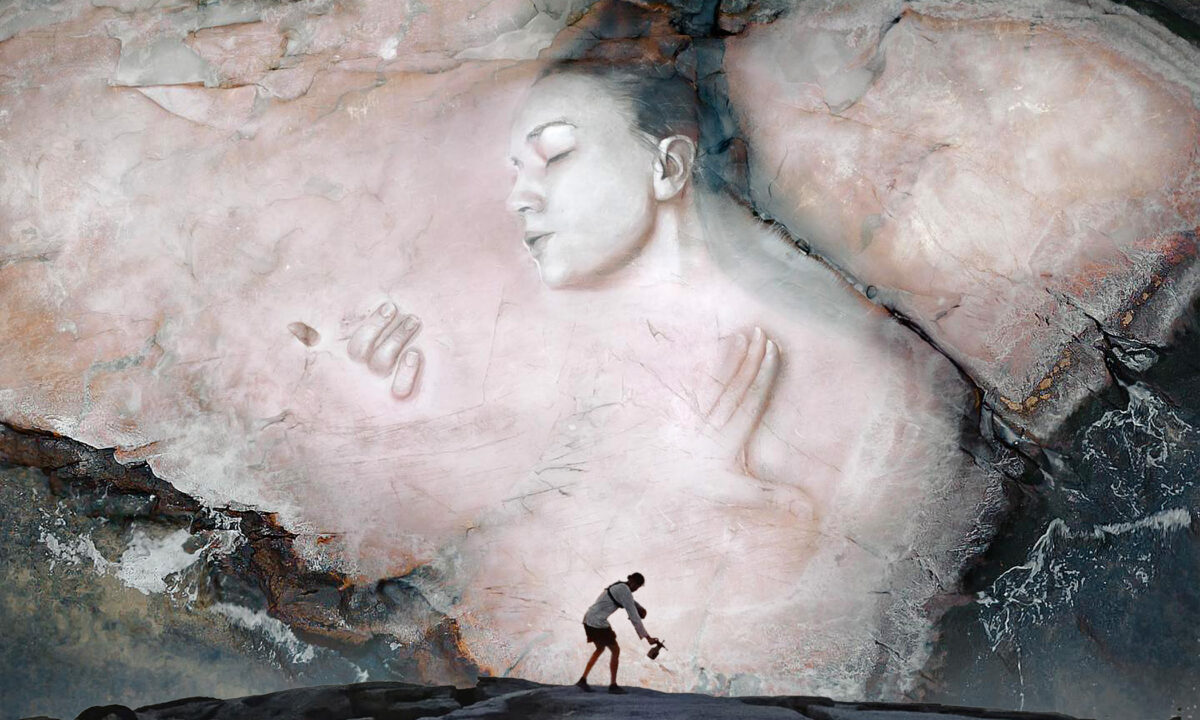 Land Artist Paints Giant Murals With Earth Pigments That Wash Away in the Rain, Can Only Be Seen From Above

Here’s an artist whose paintings definitely won’t stand the test of time — but that doesn’t worry him. He paints murals on huge, natural rock formations outdoors using biodegradable paint that washes away with the rain.

Serious artists know it’s not the art object, hanging on the wall with expensive frames, that counts, but the act of creating and being one with nature (and, these days, showing it on Instagram).

The impermanence of these massive murals highlights that authenticity of purpose.

His name is David Popa. He uses industrial pressure sprayers, a unique paint formula, and other natural media — chalk, charcoal — that aren’t permanent. But what’s most important to him is finding a piece of natural, rocky landscape that’s inherently beautiful.

In his colossal paintings, partial human faces, hands, and other anatomical features evaporate into the rock surface in between cracks and craggy boulders. The human form and nature merge harmoniously. Popa then takes drone shots from above to really showcase his magic.

The 29-year-old American born artist learned classical drawing and painting at an early age from his dad, Albert, who was introduced to art through spray-painting graffiti on the streets of New York. But it was the old masters and classical ideals that captivated him. Art school then nurtured that talent.

“It wasn’t until I grabbed a spray can and went to a local legal graffiti wall in my junior year of college that I discovered a more kinetic, engaging way of making art,” David Popa told The Epoch Times.

“I became obsessed with finding the next location to make another mural and found myself in Finland the summer of my final year in college.”

There, he met his wife and chose to stay.

“For four years, I continued to make murals in the urban context but felt I was missing a piece to the puzzle, which was my love for nature, despite growing up in NYC,” he added.

Popa began experimenting with charcoal, chalk, and natural earth pigments to create works that washed away after they were created.

His first experimental land work was in 2016, but he really took off as an artist in July 2019 when he painted a white portrait of his wife on an islet in southern Finland, and his work was featured on national news.

“The process of making these land works was initially just a desire to ‘play,’ to see what would happen if I combined all of my childhood loves,” he said, adding that the results are reminiscent of prehistoric caveman paintings.

“The natural materials I use would have been very similar if not the same materials as the artists used in the earliest cave paintings 40,000 years ago.”

Popa now looks for ever more remote locations for his murals — some of which can only be seen from above, using drones. He embraces ephemeral experiences and unsuspecting events like changing tides and even bird scat accentuating his work.

“Many of my collectors praised those abstract strokes,” he said. “You can imagine they were surprised when I told them it was the birds.”

Popa added, “It is this dynamic conversation with the ephemeral, natural world that gets me really excited and I hope beckons the viewer to consider the nature of our brief existence and relish in its profound mysteries and everyday miracles.”