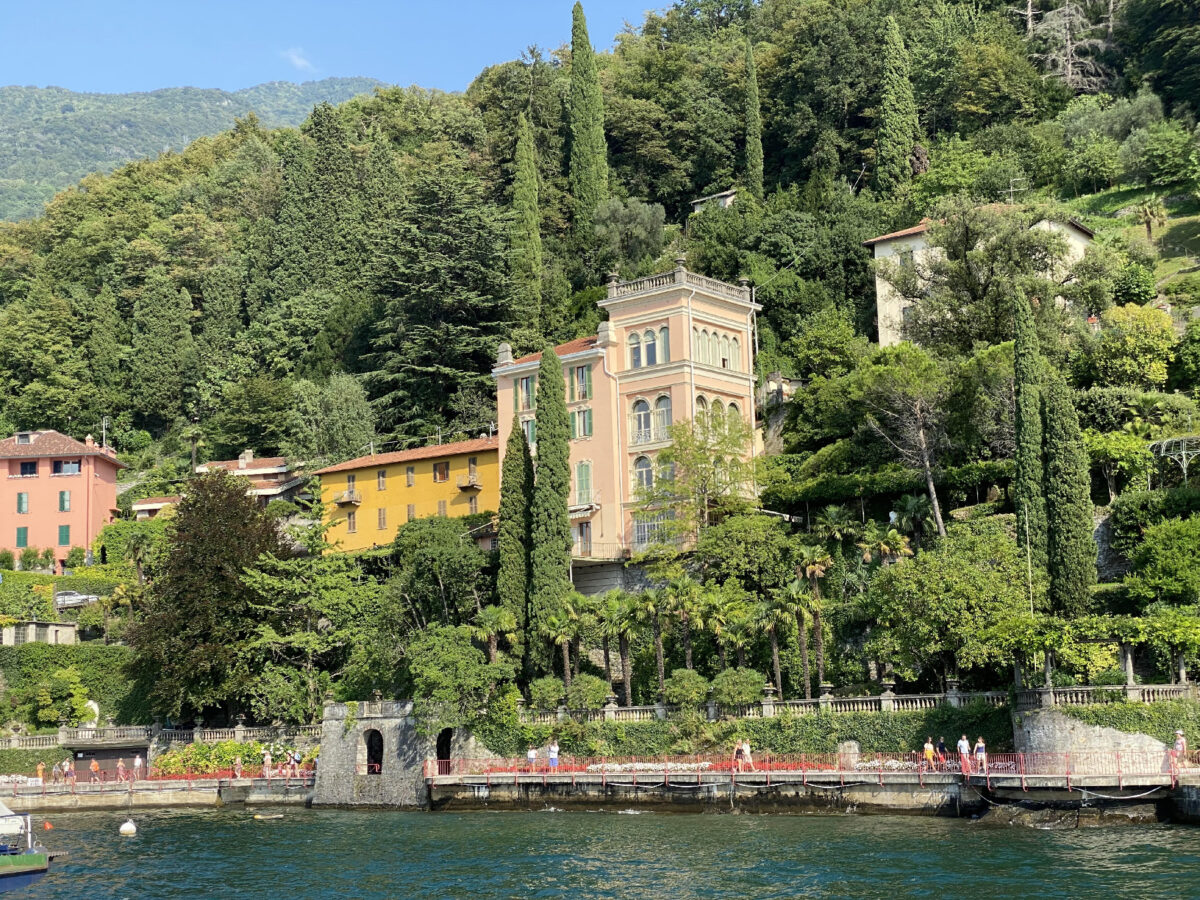 Ca Livia is a pink palace that reigns above the harbor above Varenna harbor in Italy. (Philip Courter)
Travel

Lake Como Isn’t Just for the Rich and Famous

We never considered visiting Lago di Como on our many trips to Italy, assuming it would be prohibitively expensive to hobnob on the same exclusive waterway as George Clooney, Sting, and Sir Richard Branson. Because we were traveling in August, cooling off in the shadow of the Alps before flying home from Milan—only an hour away from this fabled wishbone-shaped lake—sounded idyllic.

Because we were traveling with our son, his Roman wife, twin 4-year-old daughters, a 6-year-old son, and Nonna (their Italian grandmother), we needed a minimum of three rooms. Hotel prices were steep, so I searched “lakeside villas” and found many stunning dwellings with equally stunning prices: more than $10,000 per night! Eventually, I found some affordable possibilities on Airbnb and VRBO.

After eliminating some because the pictured antiques might not survive our boisterous grandchildren, I discovered Ca Livia—a pink palace that crowned the hillside above Varenna’s postcard-perfect harbor. While Bellagio, Como, and Menaggio are more famous, Varenna—an old fishing village—is a jewel on the less-crowded eastern side of the lake. Most of the streets are too narrow for cars, so everyone walks from the ferry up ancient stone steps, through shady passageways, and past the pastel facades in shades of lemon and gold on the way to the central piazza.

Ca Livia has its own gated gardens that join the public passerella, which parallels the lake. Sprawling over five levels, the villa has four bedrooms, a sunny eat-in kitchen, a formal dining room, living rooms on two floors, several terraces, and even a billiard room with a roulette wheel and shelves of games.

Each morning, we followed our lively grandchildren as they hopped, skipped, and jumped to the nearby dock, where ferries—both fast hydrofoils and slower traditional boats—departed frequently. As we chugged around one of Europe’s largest and deepest glacial lakes, the children pointed to remnants of medieval stone villages juxtaposed between lavish estates, olive orchards, and steep vineyards and tried to decide which was the highest alpine peak. Meanwhile, I wondered who that couple speeding by in a vintage wooden boat with gleaming brass trim was.

Our family hopped on and off as we explored various towns. In Como—the lake’s largest city—we took the historic funicular up a sheer mountain slope to Brunate, where we enjoyed sweeping views while lunching on the terrace. We met hikers returning from the lighthouse built to honor Alessandro Volta, who developed the first electrical cell, and asked how far it was. When we heard it was a steep climb and almost 200 steps to the top, I suggested shopping in Como instead.

The next day, we took the ferry to Lenno and strolled around its curvaceous harbor to catch the water taxi to the famed Villa del Balbianello. Perched on a wooded peninsula, the estate was built in 1787 on the site of a Franciscan monastery. Count Guido Monzino, its last private owner, was the first Italian to climb Mount Everest.

As we walked up from the dock, we were greeted by quintessential tiered Italian gardens. The villa has been featured in many films, including “Casino Royale” and “Star Wars: Episode II” (both of which included languid kissing scenes), and we watched as a bride and groom were filmed strolling together and shyly smooching on the fabled terrace.

The meticulously manicured garden eschews a riot of colors while flaunting every shade of green. Pruned with precision, the ancient trees are works of art bordered by sky, mountains, and water. Plane trees are cropped to mimic candelabras, and the huge holm oaks—actually evergreens—are shaped into massive umbrellas. Most astonishing is the continuous creeping fig that hugs the loggia’s walls and pillars and is said to be almost 200 years old. Even the grass looks more like a lush carpet than a living lawn.

I found a cool alcove where I could enjoy the twins, the ribbons of their straw hats blowing in the wind as they ran up and down the paths lined with gigantic urns and classical sculptures, thinking that this just might be the most romantic place on earth.

Later, when the ferry docked back in Varenna, our Energizer bunnies were ready for their next adventure. The sultry summer sun begged us to slow down, so we headed back to the villa while our son’s family hiked the steep path to the Castello di Vezio, which was part of a chain of early warning medieval watchtowers.

Although they were too late for the falconry display, our son launched his drone to capture views of the lake and terracotta rooftops. Meanwhile, we were reinvigorated by watching the wind on the water while having a prosecco on the patio. After the sunset transformed the watery palette from gold to silver, our family joined the other residents and visitors on the passeggiata degli innamorati (walk of lovers) until we found a table at one of the lakefront restaurants for local fish and veggies.

On the way back, we stopped for gelati. For me, the highlight of the trip came when my sweet grandson—who is fluent in Italian—offered to order for me. Nothing—not even bumping into the Clooneys—could have made me happier.