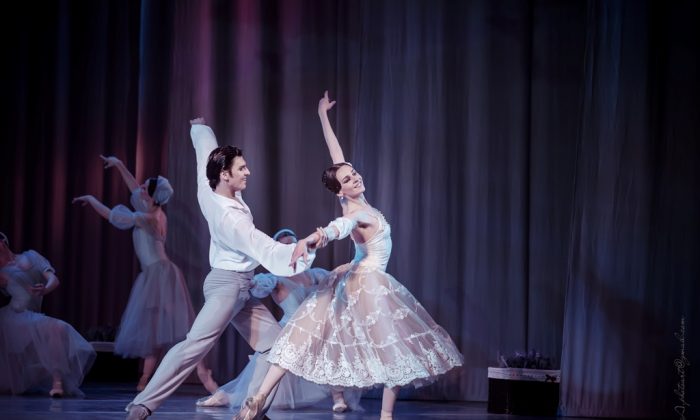 KIEV, Ukraine—The house was almost sold out, with many families with small children in attendance—more than one would generally see at a Saturday night performance of a ballet in New York. The children were well behaved and, during the intermission, several young girls danced down the aisle, perhaps aspiring to be future ballerinas.

On a tour of the Ukraine, I was able to catch a performance of the ballet “La Dame aux Camélias” (“The Lady of the Camellias”), performed by the Opera and Ballet Theatre of Ukraine, a world class opera and ballet company. The company (the opera debuting in 1867 and the ballet in 1897) is located in Kiev, the Ukraine’s capital.

The dancing by the troupe confirms that they are still world class in classical technique.

“La Dame aux Camélias,” originally an 1848 novel by Alexandre Dumas fils that he adapted for the stage in 1852, has inspired many works, most notably the Verdi opera “La Traviata.” The plot was also the basis of the Greta Garbo film “Camille.”

Ballet choreographers have also been inspired by Dumas’s work, including Frederick Ashton (“the Marguerite and Armand” ballet in 1963), which was danced to the music of Franz Liszt. John Neumeier created a ballet with Frédéric Chopin’s music.

The Kiev Ballet’s version was created by the company’s artistic director Aniko Rekhviashvili. The dance technique is classical and the performance could pass for one of the 19th century (except for the visual effects). But the music is unusual in that the ballet is set to excerpts from Beethoven, Brahms, Pachelbel, Faure, Elgar, and Stravinsky.

While the ballet generally follows the plot of the novel, it also seeks to incorporate elements from the life of Dumas that inspired his fiction—namely his affair with the Paris courtesan, Marie Duplessis. Her name is used in the ballet rather than that of Marguerite Gautier, her fictional counterpart.

The ballet starts with a prologue: the auction of Duplessis’s possessions after her untimely death from tuberculosis. Her former lover, Alexandre, is there and is overcome with emotion.

Act 1 is a flashback to the meeting of Marie and Alexandre, where they fall in love at first sight. After they become an item, the young man’s father visits Marie to plead with her to break off with his son to save his reputation. She reluctantly complies.

Act2 begins with Alexandre still dejected by Marie’s farewell letter. When he encounters her at a salon where she is in the company of her former lover, the Duke de Guise, he erupts in jealousy. Finally, Alexandre’s father reveals the truth and the young man rushes to her side as she lies dying. The ballet ends with Marguerite ascending to heaven.

The dancing by the troupe confirms that they are still world class in classical technique. Anastasia Shevkenko is a dazzling Marie, Olshansky is a graceful Alexandre and Vladyslav Ivashchenko is properly stern as the father.

Dramatically, Rekhviashvili makes a few missteps. For example, in the scene between Marguerite and Alexandre’s father, he crawls at one point, making it seem as if he is making a play for her himself. Also, the ending with the heroine entering heaven with a boys’ choir singing in the background is a bit much.

In any event, the use of familiar classical themes is effective, such as the lovers dancing to the theme from Elgar’s “Enigma Variations” and the Pachelbel Canon.

The audience obviously enjoyed the performance with enthusiastic applause at the end of each scene and a standing ovation at the end.

A Note on Traveling

Ukraine is fascinating for its rich cultures, turbulent history and tasty cuisine. However, English is not generally spoken and the Cyrillic script is more difficult to figure out than Romance languages.

Cobblestone Freeway is run by Vincent Rees, a Canadian ethnologist of Ukrainian descent, married to a Ukrainian woman and living in the country. He arranges outstanding cultural tours and is a delight, as are the two of his staff on my tour, Danya Pidlisetska (who accompanied me to the ballet) and Bogdan Glushko. They will make your trip memorable.