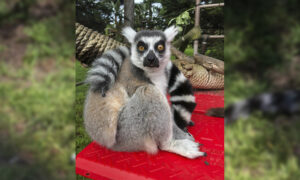 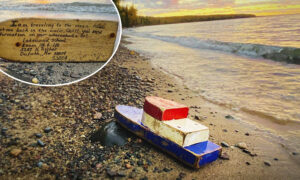 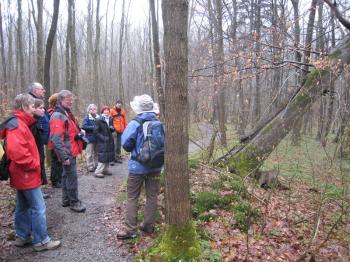 Not a Brothers Grimm Tale

The Kyffhauser Woods receive a high distinction, "Quality Foot Wandering Route in Germany." The area is situated in Germany's northern Thueringia. The award comes from the German Hiking Association, praising the marvelous pockets of nature, and the excellent signs along the routes.


Brother Rolf from Germany's Franziskanerkloster Huelfensberg, a place where visitors can find relaxation, has quite a few stories of adventure to tell his guests.

This pilgrimage area was located at an elevation of 448 meters. It was a restricted area in the former atheistic German Democratic Republic (GDR), the Communist-ruled East Germany, between 1945 and 1990.

This pilgrimage area borders on Eschwege, in the State of Hesse. There are four events annually. The Abbey and its value for pilgrims were first mentioned in 1351, and is Germany's oldest and most eminent pilgrimage destination. It is virtually a holy place for the Catholic population of Eischsfeld.

Since 1933, St. Martin's cross has loomed above the area, shining bright nightly. The cross was a thorn in the eyes of the communists, glowing like a beacon for those during the GDR era who wanted to “come across” to the West. The communists wanted to ban this beacon of hope, but the then abbot, Brother Erwin, had convinced them that this light shines for the souls of the dead, adding with a smile, “Somewhere around the world, someone dies every moment.”

The gothic style pilgrimage abbey features a wooden crucifix that was produced in the year 1000, and enjoys special veneration—‘The Crucified’ stands on a pedestal, without the wound in His side, and seems to smile.

A cloister path was inaugurated in 2005, and the “Loccum-Volkenrode Pilgrim Path” was
opened on Reformation Day in 1997.

As time heals all wounds, this border area once known as the “Death Strip” has become the “Green Ribbon,” a top ecological area near Eichsfeld.

Dante, in his “Comedy of the Gods” book (1307-1321), stated that “Francis of Assisi gave the world the birth of a sun.” Travelers might want to re-read some of these statements when visiting the nearby medieval town of Muehlhausen that pays tribute to the Franciscan monks in Thueringia.

The exhibit is open from spring until October 31 in the Bauernkriegsmuseum [Farmers War Museum] at Kornmarkt. The town itself is easily explored on foot. It takes an hour to walk around the well-preserved town wall with its 38 towers. The former moat has become a small park. And no other than Johann Sebastian Bach played the organ at Divi-Blasii-Church, with her 122 meter-tall towers that lean to the right. The 84th Bach Festival was held between August 7 and 16, this year.

Those who explore the Hainich National Park between Muehlhausen, Bad Langensalza, and Eisenach, might imagine themselves being in a primeval forest, and one in the center of Germany. Wanderers encounter ancient trees, mostly silver-trunked red beech; an oak tree with a diameter of 1.75 meters, and a circumference of 5.45 meters.

These are sandwiched between and surrounded by fallen giants—split, some hallowed—ravaged by storms. But gentle green mosses, lichens, and mushrooms enliven the dead trees. An occasional violet peeks from among the vegetation.

During spring, wild garlic spread their scent. And a carpet of blooming flowers covers the forest floor. Standing puddles of water and pools vie for existence. Let nature be nature, so is the motto.

But one will enjoy this area best with a guide, who urges one to look at the tips of the giant trees with the aid of a mirror. The entrance to the fairy trail gives a feeling of being in the land of the Brothers Grimm tales, or transported to the stories of the writer Bechstein. An adjoining pine forest becomes an exciting labyrinth—a maze—because not all paths lead out of it again.

The Baumkronenpfad [Tree Crown Path] at Hainich is still new but already much beloved; so much so that in 2005 there were 26,000 visitors. This is the setting off point to climb to the roof of this forest. From Thiesmburg one reaches the mighty columns that transport people for 310 meters among the tops of the trees. At ten meters high, the adventure begins: filled with exciting history and puzzles, finally culminating to a height of 24 meters. Then up into the Baumturm [Tree Tower], where the view from 40 meters high sweeps far across the tree tops. Nevertheless, no one will probably see the 30 or so wild forest cats that live here.

Resting in the warmth of the Thueringia-Therme (thermal baths) in Muehlhausen provides an opportunity for debriefing, and gain energy to start all over again the next day.

Driving through the flat Thueringia Basin toward the north in the direction of the Harz Mountains brings people to the Soleheilbad Frankenhausen, a city featuring Germany's most crooked tower. There also looms the Kyffhaeuser Mountains, where according to a legend, Emperor Friedrich Barbarossa I (1152-90) had his dreams.

One may wander along the well-marked Kyffhaeuser path next to bizarre, pointed gypsum rock formations, the color of alabaster, and across smelly slates that invite one to scratch and sniff them. The paths lead further past rare flora, and feature listening stations that explain the history-loaded surroundings to the traveler.

The 81 meter-tall Kyffhaeuser Monument (www.kyffhaeuser-denkmal.de) built in 1890, towers above the world's deepest well, (176 m), all to the honor of Wilhelm I—Prussian King and German Emperor. The troop leader sits high atop a horse, helmeted, and seems to ride across the land where visitors can overlook once they have managed to climb the 247 steps to the tower's lookout.

Below the emperor's monument one encounters a statue of Barbarossa, lounging, and leisurely combing his beard that reaches down to his feet. The largest German gypsum/anhydrite cave, open to visitors, bears his name, a given!

Although the above are German Websites, if contacted by e-mail, information will be provided in English.