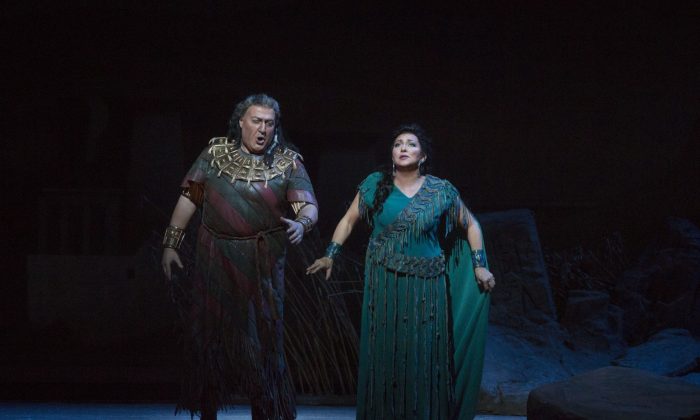 Krassimira Stoyanova as the Met’s Aida

Verdi’s “Aida” is back at the Metropolitan Opera in Sonja Frisell’s 1988 production.  Audiences still marvel at Gianni Quaranta’s massive set, but the musical elements were also securely in place thanks to a fine cast led by Bulgarian soprano Krassimira Stoyanova in the title role.

“Aida” takes place in ancient Egypt when the country was at war with Ethiopia. Aida, the daughter of the Ethiopian king, Amonasro, has been captured and is now the servant of the Egyptian princess Amneris. Both women are in love with the Egyptian general Radames, who loves Aida.

When it is announced that the Ethiopians are about to attack, the Egyptian king names Radames as leader of the army. Aida is torn between her feelings for Radames and her patriotism toward her native country.

Act 2 begins with a triumphal march to celebrate Egypt’s conquest of the Ethiopians. Amneris tricks Aida into revealing her love for Radames by initially telling her that he had been killed in battle.

There is an immense celebration for the victorious army, where Aida spots her father, Amonasro, among the prisoners. He urges her to keep his identity secret. As a reward for Radames’s success, the Egyptian king presents him with the hand of Amneris in marriage.

In Act 3, Amonasro convinces Aida to find out from Radames the route the Egyptians plan to take to invade Ethiopia. Amonasro hides while the lovers meet and plan to run away together. The Ethiopian king reveals himself right after Radames informs Aida of his army’s plans. However, Amneris and the Egyptian high priest Ramfis then step out of the darkness. Aida and Amonasro manage to escape, but Radames surrenders.

The last act starts with Radames declining to renounce Aida or to defend himself against the charge of treason. Once he is sentenced to be buried alive, Amneris has a change of heart. She tries to get the priests to grant leniency but fails. Aida sneaks into the tomb so she can die along with Radames.

Verdi often begins his operas with the most demanding music. Here, the tenor playing Radames must sing “Celeste Aida” about his love for the slave girl. Riccardo Massi, who made his Met debut in this role in 2012, rose to the challenge. He has an Italianate sound that is reminiscent of his idol, Franco Corelli.

However, Massi didn’t end the aria with the diminuendo that is indicated in the score, which Corelli did, but few tenors can manage. Massi belted out the last note and the audience applauded wildly while the orchestra was still playing.

Massi also looks like a warrior. He is tall, a martial arts expert and used to work as a movie stuntman.

As Amneris, Violeta Urmana sounded a bit shaky in Act 1 but improved as the performance progressed. Her Act 2 confrontation scene with Aida was fiery.

Stoyanova has been hailed around the world for her Verdi interpretations, and her Aida is memorable. She originally studied as a violinist and is quite a scrupulous musician. She also inhabits the role, making sure to convey Aida’s emotions. Her “Ritorna Vincitor” and “Patria Mia” were the high points of the performance.

Baritone George Gagnidze is a powerful Amonasro. Veteran bass-baritone James Morris still has presence and a booming voice, although his tone has become unsteady. Also of note were Soloman Howard as the King and Jennifer Johnson Cano as the offstage priestess.

The choreography by Alexei Ratmansky was captivating, as danced by Jennifer Cadden and Scott Weber.

Conductor Daniele Rustioni deserves the accolades he has received.

Latonia Moore will be Aida at the final performance of the season on April 20.