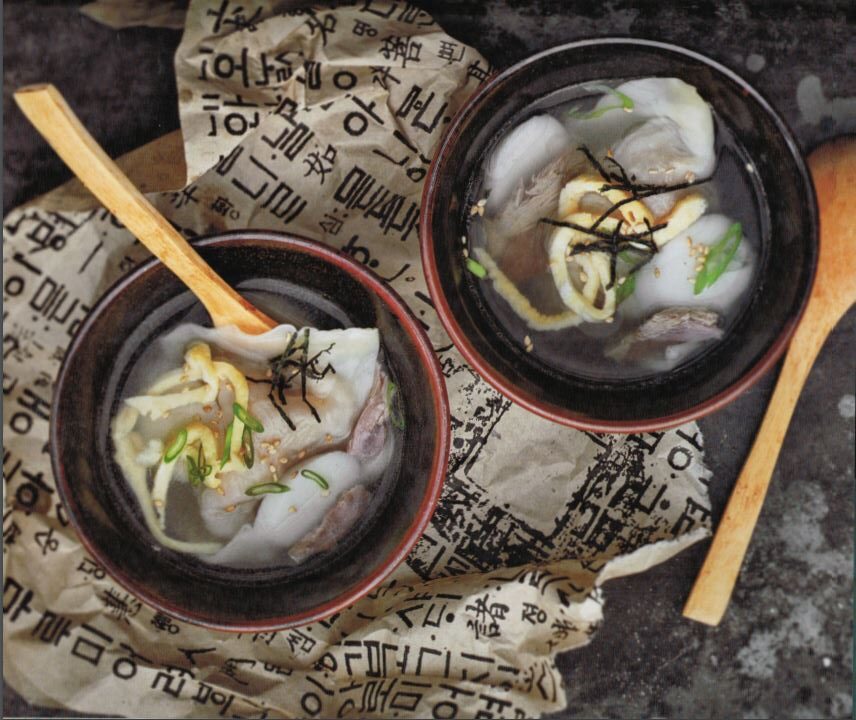 It is tradition in Korea to eat this soup for the Lunar New Year. I recommend using my Oxtail Soup as the base, but for a quick version, store-bought chicken broth and frozen dumplings will do. You can also lose the dumplings and double the amount of rice cakes to make rice cake soup (dduk guk).

In a medium nonstick skillet, heat the oil over medium heat. Beat a pinch of salt into the eggs and add them to the skillet, swirling to evenly coat the bottom. Cook, without touching, until the egg is set but just barely browned on the bottom, about 2 minutes. Flip and continue to cook until the bottom is set, again trying not to get too much color on the egg, 15–20 seconds more. Slide onto a cutting board, cut into thirds, and cut crosswise into thin strips. Set the egg strips aside.

In a large pot, bring the soup to a boil over high heat. Add the dumplings, stirring gently so they don’t stick to one another, and simmer for 4 min­utes (a little longer if the dumplings are frozen). Add the oxtail meat (if using) and rice cakes and continue to simmer until the dumplings are cooked through and the rice cakes are soft, about 2 minutes more. They should both float to the top of the soup. Season the soup with salt and pepper, but not too aggressively, as the dumplings have a lot of flavor.

Divide the soup, rice cakes, dumplings, and oxtail meat (if using) among four to six bowls. Top with the egg strips, scallions, seaweed, and sesame seeds and serve immediately.

Tip: Instead of making an omelet, the eggs can also be drizzled into the pot of soup at the end of cooking to form ribbons of eggs, like egg drop soup.

If you’re in the mood for a very comforting soup, try this. It’s a tad time intensive, but very easy to make. I suggest you make it the day before you serve it, because like many soups, it tastes better with time. Another bonus is that the fat will float to the surface and solidify in a sheet while it’s stored in the refrigerator; to remove it, all you have to do is lift it off.

Put the oxtails in a large pot covered with very cold water. Let soak for 1 hour, draining and replacing the water every 20 minutes. (This helps to remove any excess blood.)

Rinse and drain the oxtails, cover with 8 cups cold water, and bring to a boil over high heat. Reduce the heat to a simmer until a lot of scum and foam rise to the water’s surface, 5–10 minutes.

Transfer the oxtails to a large bowl, rinse well, and set aside. Discard the water from the pot and thoroughly wash the pot. Return the oxtails to the clean pot.

Add 18 cups water to the pot and bring to a boil over high heat. Reduce the heat to maintain a simmer for 2 hours, regularly skimming off any scum or fat that rises to the surface. If at any point the oxtails poke out from the liquid, add enough boiling water to cover. Add the garlic and continue simmering, skimming, and watching for bobbing oxtails until the liquid has reduced by about half (to 9 cups) and the meat is falling off the bones, about 30 minutes more. Discard the garlic and transfer the oxtails to a bowl; cover and keep warm. Skim off any remaining fat from the pot (some beads of fat are fine).

Add the radish to the pot and simmer until tender, about 10 minutes. Meanwhile, if you prefer to remove and shred the meat from the oxtails rather than serve as is with the bones, do so now. Divide the oxtails or just the shredded meat and radish among four to six bowls and top with the broth.

Tip: The initial boiling and rinsing of the oxtails reduces the amount of impurities and fat released into the broth, making it very clean looking. You can skip this process, but you’ll need to do more skimming while the soup simmers.

All recipes reprinted with permission from “Korean Food Made Simple” by Judy Joo.