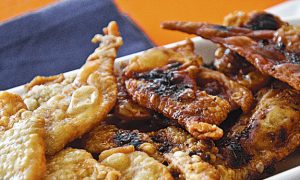 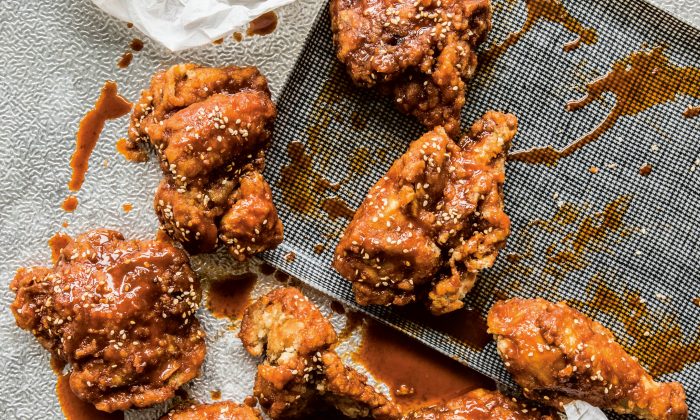 The food courts in Asian grocery stores have some of the very best eating in the country. But I have to admit that I didn’t know that when I first came to the food stalls inside my local H Mart. There were nine stalls, featuring many dishes with ingredients I’d never heard of before. It was overwhelming to look at a menu where every single thing was unfamiliar.

I could sense there was an etiquette, but I couldn’t quite figure it out. And all the while, grocery carts would come whizzing by, pushing through the throngs. I don’t think that the presence of discomfort is bad or wrong or even avoidable; the key is to push past it because there is almost always a commonality that makes discomfort dissipate.

And then I came upon Korean fried chicken (KFC!). As soon as I took a bite, I was obsessed: a perfect spicy-sweet glaze wrapped around chicken made extra crispy through a technique of frying it twice, at two different temperatures. From then on, every time I’d go shopping at this market, I’d end up buying a big box of the chicken for the staff of my restaurant. And pretty soon, I realized that I had, without even thinking about it, picked up on the systems; I knew where to return my plate at the end of a meal, and I knew which stall specialized in which dish.

Eventually, I developed a recipe for KFC. The key is the combo of gochujang, honey, and vinegar—another example of the beautiful marriage between chile heat and sweetness, this time with a little acidity and fermented funk in there for good measure.

Make the brine: In a large pot, combine 2 quarts water with the salt, sugar, and soy sauce and bring to a boil over high heat. Cook until the salt and sugar are dissolved, then turn off the heat and add the garlic head halves and peppercorns.

Pour the brine into a big container and add the ice to chill it. Once chilled, add the chicken, cover, and refrigerate for at least 4 hours (or ideally overnight).

Make the glaze: In a blender or food processor, combine the lager, gochujang, vinegar, sesame oil, honey, corn syrup, and garlic and blend until nice and smooth. (The glaze can be made up to 1 week in advance and stored in a covered container in the refrigerator.)

Prepare the chicken: Pour 4–5 inches of oil into a large pot, making sure that the oil fills the pot only about halfway at most, so it won’t overflow when you add the chicken. Set up a deep-fry thermometer and heat the oil over medium-high heat until it reaches 275 degrees F. Set a wire rack over a rimmed baking sheet.

While the oil heats, in a large bowl, combine the rice flour and potato starch. Remove the chicken from the brine and pat completely dry with paper towels. Separate the white meat and dark meat pieces, as they will fry for different amounts of time.

Dredge the drumsticks and thighs in the potato starch mixture and shake off the excess. Slowly lower the dredged chicken pieces into the oil. Be careful not to overcrowd the pot (work in batches if you have to) because this will drop the oil temperature too low.

Fry the dark meat, turning occasionally, for about 18 minutes, increasing or decreasing the heat as necessary to maintain 275 degrees F. Use tongs to transfer the chicken from the oil to the prepared rack to cool. Repeat the process until all the dark meat has been fried.

Let the oil temperature come back up to 275 degrees F and repeat the process with the breast and wing pieces, frying for 12–14 minutes. Once fried, transfer the white meat pieces to the wire rack with the rest of the chicken. Let it rest for 20 minutes.

For the second fry, increase the heat until the oil has reached 350 degrees F. Working in batches, add the chicken to the hot oil and fry for 4–5 minutes. Repeat until all the chicken has been fried a second time.

Put the chicken in a large bowl and pour about 1/2 cup of the glaze over the top. Toss well until the chicken is completely coated, adding more glaze if you need it.

Arrange the chicken pieces on a plate and sprinkle with sesame seeds. Serve hot.

Recipe reprinted with permission from “Cook Like a Local: Flavors That Can Change How You Cook and See the World,” by Chris Shepherd and Kaitlyn Goalen. Published by Clarkson Potter.