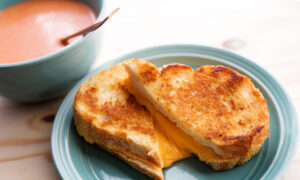 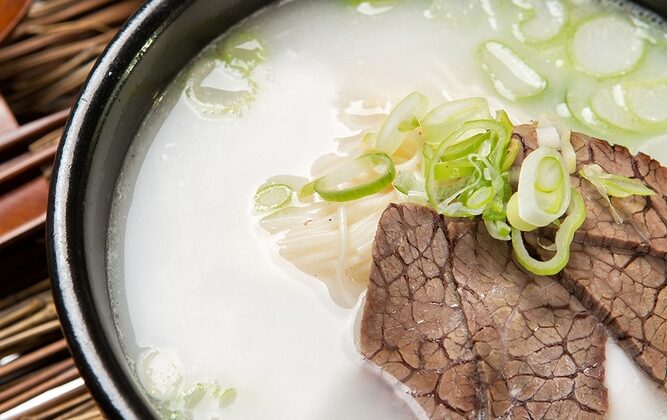 Unlike clear bone broths, seolleongtang is an opaque, creamy white, achieved by boiling—not simmering—the bones, coaxing out all of the flavor, collagen, marrow, and fat. (TMON/Shutterstock)
Food & Dining

It’s 3 a.m. on a December’s night in 1997, and I’m sitting in Gammeeok, a cozy restaurant on 32nd Street, Koreatown in New York City. Despite the hour, the restaurant is buzzing, full of late-night revelers wanting a bit of sustenance after a long night of drinking.

It’s bitterly cold outside, and I’m tucked into a comfy corner table with some friends. The rustic, blond wooden décor gives the restaurant the homely feel of a hanok, a traditional Korean house, and a savory, beefy aroma fills the air.

In the back, an open Korean-style hearth, called a buttumak, boasts two gigantic black cast iron pots, called gamasot, settled over roaring fires. An elderly man stands next to the cauldrons with a long, dark wooden paddle and slowly stirs the silky, milky-white liquid inside—the magical broth that everyone has come for.

Seolleongtang, this nourishing, long-boiled ox bone soup, is the signature dish on the menu at Gammeeok. One of Korea’s most traditional dishes and beloved wintertime soups, it’s possibly the tastiest, most satisfying bone broth you’ll ever try.

Seolleongtang’s most notable quality is its color: a creamy, milky white. In fact, the commonly used Hanja (Sino-Korean) characters for the dish literally translate to “snowy thick soup.” This color comes from boiling a medley of bones for hours and hours, coaxing out all of the flavor, collagen, marrow, and fat. The longer it cooks, the richer the flavor, and the thicker and milkier the broth becomes.

Since the primary ingredient of seolleongtang is bones, rather than meat, it was initially a cheap peasant food, a staple during trying times. Anything from cow feet, knuckles and legs, head, tongue, gristle, to even intestines can be thrown into the mix, and the broth is continuously skimmed of any impurities. Although inexpensive to make, the soup is rich in nutrients, especially protein and calcium, and a deeply savory flavor.

The origins of seolleongtang, much like the broth itself, are somewhat cloudy.

One theory dates the soup back to Korea’s Joseon dynasty (1392—1910). During this time, nationwide sacrificial ceremonies were held every lunar new year to pray for a bountiful harvest. The sacrifice was called seonnongje (seonnong meaning “venerated farmer”), and was performed on a sacrificial altar. One altar was built in Bojewon, a medical facility used to aid the poor, in what is now in modern-day Seoul.

Pigs and oxen were usually slaughtered, and the king himself always attended these honored rituals. As a result, large crowds often gathered, bringing along with them hearty appetites. The king wished to feed these citizens who had traveled so far and long, and thus requested that the cooks invent dishes to feed as many people as possible with few ingredients—namely the sacrificial ox. Seonnongtang—tang meaning soup—was thus created. Over time, the pronunciation of seonnongtang changed to seollongtang for ease, and the romanization evolved into seolleongtang.

Another theory is that the Mongols brought the dish over during their invasions of Korea in the 13th century, during the Goryeo dynasty. A Mongolian textbook published later in the Joseon era, during King Yeongjo’s rule (1724—1776), documented the Mongols making large quantities of soup by boiling cows, goats, or sheep in water, and later seasoning it with salt, to feed their armies. The Mongolians also had a dish of sliced and boiled beef with scallions, called sulen, that could have eventually evolved into seolleongtang in Korea.

Whatever the historical origin, the humble soup has become a source of national pride for Seoul, so much so that the city’s government has placed it on the Seoul Future Heritage list, declaring it worthy of preservation.

Hyung Kee Choi, a Seoulite and founder of Gammeeok restaurant, with locations in New York City and New Jersey, researched and developed his legendary seolleongtang recipe for years before opening his first restaurant in New York in 1990.

He uses a combination of 80 percent cow knuckles and 20 percent cow feet—he says the feet are essential to achieving his signature thick, gelatinous broth—and soaks and washes the bones well to remove any blood before he boils them. He then places the bones in a well-used and seasoned gamasot and boils them over high heat for 10 to 12 hours.

But the real secret to his recipe, he says, lies in what he calls “babysitting the broth.” During these long hours of cooking, someone must watch and continuously stir the broth, skimming it and adding water at just the right times.

I vividly remember that no matter what hour of the day I went to Gammeeok, there was always someone standing over the pots, watching their contents intently, stirring the soup with care. It is a meticulous process, a labor of love, but the resulting creamy, silky broth is worth the effort.

Once the broth is ready, some simple ingredients are added to complete the soup.

Traditionally, rice was added, but wheat noodles were introduced after the Korean War, due to a rice shortage and an abundance of white flour. In fact, the government forced certain soups to be served with wheat noodles instead of rice, to reduce demand. Thus, a tradition was created, and to this day you’ll often find noodles served in seolleongtang.

Sliced boiled beef is another typical add-on. Historically, off-cuts of meat were tossed in, but nowadays, brisket is commonly used. Choi takes pride in his choice of beef: He only uses meat from large cattle weighing at least 900 pounds. These bigger cows are fattier, and boast nicer marbling, thus adding a rich, beefy flavor to the broth.

Seolleongtang is also served with a myriad of side condiments. Notably, salt is always only added at the table, never during the cooking process, so each diner can season their soup as they prefer. Korean red chile flakes (gochugaru) or black pepper are also options, but the vital garnish is freshly sliced scallions, with diners usually scooping heaping spoonfuls at a time.

Kimchi, specifically radish kimchi (kkakdugi), is an essential side dish, as its sharp tang and spice nicely cut the richness of the soup. A little bit of the kimchi juice can also be added to the broth, to give it a fresher taste.

Conventionally, seolleongtang is served in an unassuming earthenware bowl called a ttukbaegi. Gammeeok also offers each table a ttukbaegi full of sliced scallions and a ceramic urn full of homemade kkakdugi radish kimchi, which is cut tableside with scissors.

Gammeeok’s longevity on New York City’s restaurant scene is a testament to the popularity of seolleongtang, and Choi’s much loved recipe: He celebrated Gammeeok’s 30th anniversary last year. (Note that the restaurant moved to a new location on 32nd Street.)

To this day, Choi still enjoys a bowl of his seolleongtang 3 to 4 times a week. He says that he is especially passionate about the “purity” of his broth, and the natural, deeply savory flavor derived only from the best ingredients.

I asked him why he feels that Gammeeok’s seolleongtang is so loved.

“We are a culture of broths,” he said. “All Koreans crave broth.”

I am no exception. Even as I write this story in London, I cannot wait until I can sit at Gammeeok again for a piping-hot bowl of seolleongtang. But for now, I will have to babysit my own broth on my own stove.

A proper seolleongtang needs to be boiled for at least 10 hours; as a result, I have only made it a few times at home. Still, if you can sacrifice half a day, it’s a worthy endeavor, as you can make a big batch to freeze and enjoy time and time again. It is the perfect soup to make during lockdown—make no bones about it.

I am even finding the whole process somewhat meditative: gently skimming the broth, watching it slowly cloud over. In the end, the reward is a bowl of comforting goodness, from modest beginnings made rich with time and patience, warming and restoring you from the inside out.