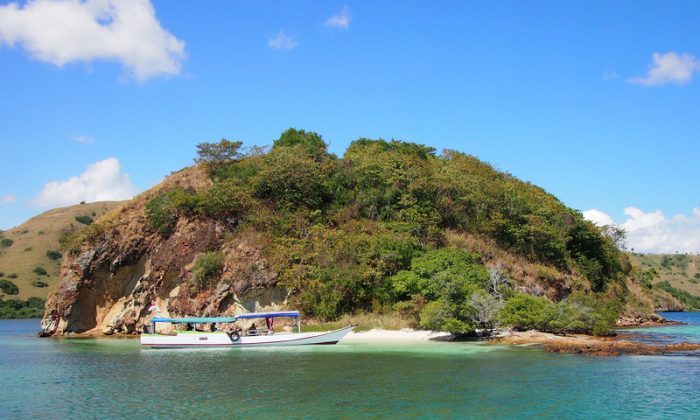 Komodo National Park is a protected watery expanse that covers a group of islands and reefs to the east of the island of Flores, Indonesia. Komodo is famous for the giant lizards of the same name, but it’s also home to some of the best coral reefs in Indonesia.

To visit Komodo you have to go via Labuan Bajo, the major port city on the west coast of Flores. Komodo Island is too far from Labuan Bajo to make a worthwhile day trip. If you are pressed for time you can visit Rinca Island in one day. Rinca has more Komodo dragons than Komodo so this is a reasonable option. To blow through in a day just to see the dragons though would be a shame, as part of the attraction of the Komodo National Park is the park itself.

A two day/one night boat tour will get you to Komodo and Rinca, as well as stopping at some other islands on the way for snorkelling and beach activities.

Finding a tour can be a challenge in Labuan Bajo. If you there in low season there might not be enough people to fill a boat and you could end up having to charter a whole boat yourself. All of the agencies on the main road in Labuan Bajo had signs up advertising “passengers needed for tomorrow.” That they didn’t have passengers in the first place wasn’t mentioned. I walked around and was quoted between 2.5 to 3 million rupiah ($210-250 USD), many of which were just trying to get me to charter a boat on my own.

And the Winner Is…

After walking around I found a boat that was going out that had passengers and could split the cost, and I was offered the rate of 900,000 IDR ($76 USD). The company was Putri Komodo Tours. It was the first boat I found that had enough passengers to share the expense so I booked it without any other consideration. Prices seem to vary according to how many others are on the boat and negotiation, so the price indicated here was what I paid.

The price included 2 days/1 night on the boat, plus food and drink. Not included is the national park fees (paid at Rinca or Komodo Island) and I had to hire snorkel gear separately (around $3 a day from a shop in town).

I didn’t know what to expect from the boat. I was thinking that it was going to be like the backpacker boats that ply between Lombok and Flores over 4 days where everyone sleeps on the deck. The thought of even spending one night on such a boat left me with dread, but it seemed there was no other option to see Komodo and experience some of the other islands.

Fortunately the boat was nothing like I expected. For a start there were cabins. The boat had two cabins and I got the front cabin to myself while the other two passengers took the second one. No sleeping on the roof with partying backpackers here, though there were mattresses for the top deck if you wanted to.

My other concern was toilet situation. I’ve been on a boat with a squat toilet, and let me tell you, it wasn’t a pretty sight or smell. I sighed relief to see a clean western toilet and shower.

Food and drink on the boat (James Clark, Nomadic Notes)

I brought a bag of junk food snacks in a last minute shopping spree, just in case. I needn’t have worried about bringing food as we were well feed the whole time. The crew caught seafood as required and there was always more than enough.

Tea, coffee, and ice-cold water was available all day, and afternoon snacks and shakes were served.

There was nothing for sale onboard the boat, which was part of its appeal. We were told to stock up on beer if anyone wanted to drink. I was happy with the Kopi Flores.

Part of my pre trip dread was from previous boat tours where the crew feel compelled to entertain you all day. Stuck on a boat with crew of the “are we having fun yet?!” variety is not my kind of fun.

The crew were great. Entertaining but not in your face. There were two young deckhands, the chef, and the captain. The two young guys would come up to the front to talk and practice their english and make a joke or two.

In the evening when the boat was about to drop anchor the deckhands were on the bow. They turned around and yelled out “James! James!”, like kids yelling for their parents to watch as they are about to do something silly. In this case they re-enacted the Titanic “I’m Flying” scene for me. Hilarious.

Dragon Hunting (so to speak)

Seeing the Komodo Dragons is the main event of this trip, and if you are lucky you will see them twice. On the first day the boat stops at Rinca Island and there are Komodo’s lounging around nearby the rangers office.

On the second day we visited Komodo Island. The boat docked at the island overnight so we got started first thing in the morning. Once again there were Komodos gathered around the main office. We were told that they aren’t being fed but they seem to be hanging around in hope for something (people, perhaps?)

On both islands we went for a walking tour through the forest for an hour or so, spotting deer and water buffalo (both dragon food). It wasn’t until we were near the end of the walk that our guide took out his phone and showed some photos of gruesome injuries of a park ranger who was bitten by a Komodo the month before. He was flown to hospital in Bali and the wounds were so severe that he was still recovering in hospital. Yikes!

After seeing the dragons there isn’t much else to see on the islands in terms of exotic wildlife, but it was good to walk around for a while on solid ground before getting back on the boat.