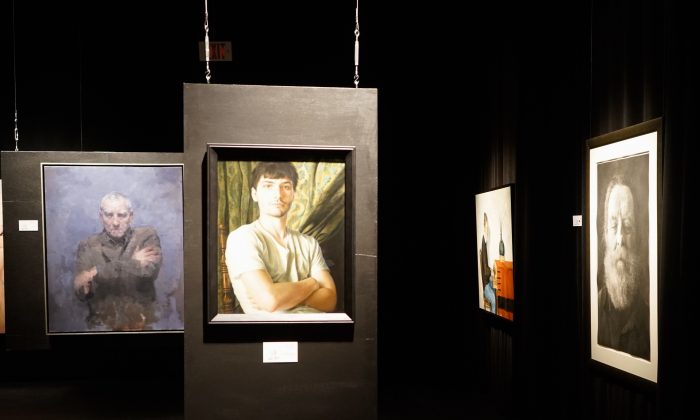 Some of the portraits in the Kingston Prize national portrait competition on display at the Firehall Theatre in Gananoque, Ont. (Courtesy of Kingston Prize)
Art Marketplace

Kaaren and Julian Brown created the Kingston Prize national portrait competition 10 years ago to showcase Canadian talent and Canadian people. They were inspired by a similar competition in Sydney, Australia where they lived in the late 1960s.

The couple, who recently celebrated their 50th wedding anniversary, had noticed a dearth of humanity in Canadian paintings, which are dominated by landscapes—a trend that in part began with the Group of Seven artists, according to Julian Brown.

“They did show them as empty, and the result is that Canadian landscape painters following the Group of Seven never show any people in the landscapes. You go to any commercial gallery and look at the landscapes—lovely stuff some of it—but you never see any people, and that’s wrong,” Brown says.

“We thought that a prominent, popular, promoted competition for portraiture would bring back a realization that the history of Canada is the history of its people. It’s not the history of lakes and rivers and strong west winds and pine trees,” he adds, explaining the couples’ motivation for creating the Kingston Prize, so named in honour of Kingston, Ont., the city where they raised their family.

After drafting the rules of the competition and lining up a jury panel of three experts, the first competition was held in 2005. It received 150 entries.

The top 30 finalists of this year’s biennial competition chosen by Queen’s University professor Stephanie Dickey, landscape artist Glen Priestly, and gallery director Tom Smart, are on display at the Firehall Theatre in Gananoque, Ont. The 30 works were culled from over 400 entries, which clearly proves that the art of painting a great portrait is not dead.

The entries, from Canada and elsewhere, represent a variety of techniques and subjects, with some being quite remarkable. The rule is that the artist and subject must be Canadian, which can include people with permanent resident status and expats studying or working abroad. The image can be a painting or a drawing.

A good portrait is not just a straight-on headshot with little context that looks stiff or staged. It can have layers of meaning that is sometimes ambiguous, leaving the viewer thinking about what they see. If done well it can capture the essence of the subject and reveal the inner person.

In “Arrow,” one of the works on display at the Gananoque exhibit, David Caesar has captured the impish grin of his friend as she sits on the balcony holding an arrow, whereas Hélène Béland’s “Woodland Fairy” shows the open, honest gaze of a young woman wearing a flowered headband on which a sparrow is perched.

Some of the subjects look directly out from the image, which can really draw one into the emotion of the moment or show trust in or clear ties to the artist. One example of this is Leslie Watts’s “Stefan, 23,” a portrait of her son with his arms crossed and calmly looking out from his world.

In “Not Monday but Tuesday” by Joe Coffey, the artist has captured the transcendent look of his friend that occurs when he is playing the harpsichord, although we only see his face in profile.

Several works portrayed a parent. Some of the artist notes state that the artist’s relationship with their parent may not have always been good; however, the strength of character shown in the face is arresting.

Visitors to the exhibit are given a ballot to vote for their favourite portrait. The People’s Choice winner will be announced on Oct. 25 at the closing ceremony before the artwork goes on tour. To date, the winning People’s Choice portrait has not been the same as the jury-picked winner.

After Gananoque, the exhibit travels to the Beaverbrook Art Gallery in Fredericton, New Brunswick, opening Nov. 14 and running to Feb. 14, 2016. The $20,000 winner and two Honourable Mentions will be announced at the opening night gala.

The next stop is Galerie d’art Desjardins in Drummondville, Que., where it will be shown until mid-April 2016, after which the works will be returned to the artists.

The competition is held every two years. The works of the five previous winners are on display at the Agnes Etherington Art Centre at Queen’s University in Kingston until Dec. 6. Also, Heritage Canada chose 11 of the finalists from the 2013 competition and mounted life-size reproductions of them in a laneway between the Clarendon Lanes apartment buildings in Ottawa’s Byward Market.

Brown says the competition provides exposure and publicity for the artists, with the works often selling as well as leading to commissions. The $20,000 prize also helps.

“What we’re doing is providing an encouragement to them through money to study their fellow creatures and to paint and draw pictures of them. That’s a huge contribution—to look at your fellow people, your friends, neighbours and apply your art skills to producing portraits.”

To view the 30 finalists, go to http://kingstonprize.ca/exhibitions/2015-competition/. Clicking on each thumbnail brings up the image in colour and notes about the artist and their subject.