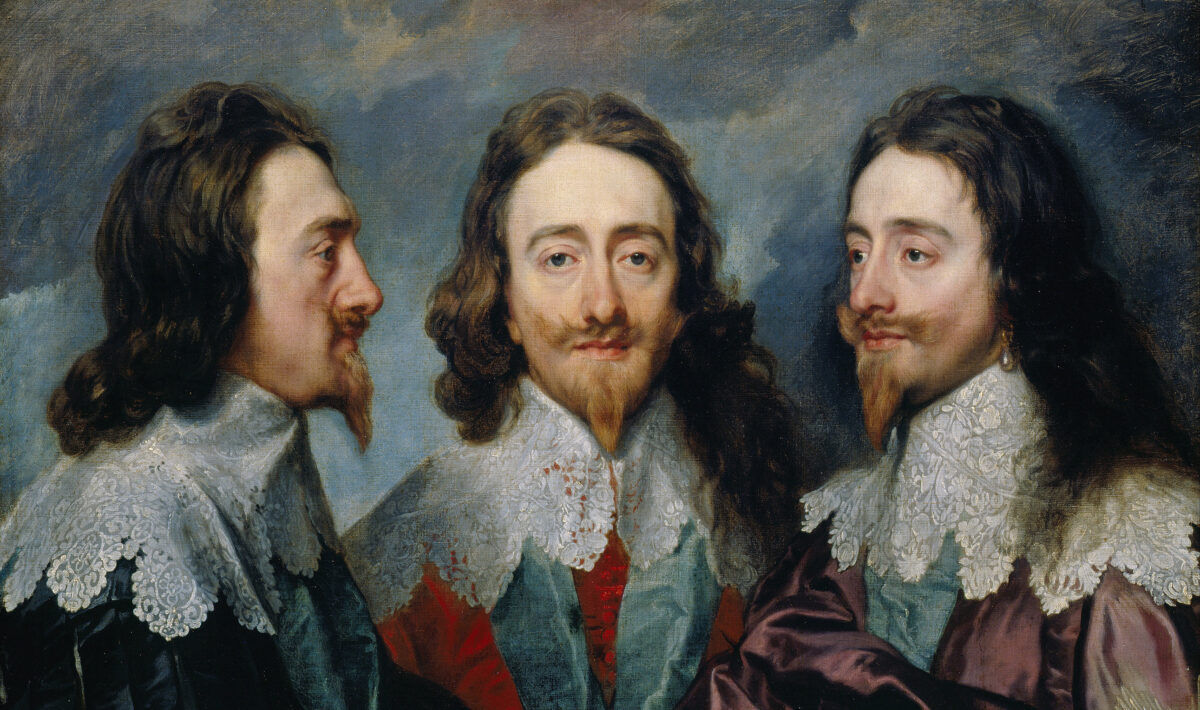 King Charles I and the Innovative Bust

In 1636, Gian Lorenzo Bernini received an unusual painting—Anthony van Dyck’s “Charles I in Three Positions.” In the center, the king faces forward. To either side, he is depicted in full and in three-quarter profile. An eccentric demonstration of talent? A whim? No. The painting is a highly unconventional means of preparing to sculpt a bust commissioned by history’s greatest royal art lover.

King Charles I of England is almost as famous as a patron of the arts as he is for his role in the country’s civil war. He particularly favored the Flemish painters Sir Peter Paul Rubens and Anthony van Dyck, as well as the English architect Inigo Jones. But that’s not the whole story. Charles I was more than a connoisseur’s connoisseur. His devotion to beauty transformed England into a center of European artistic life.

When Charles became king in 1625, architecture and literature dominated English high culture. Shakespeare had been deceased for less than a decade, and Ben Jonson, the foremost English playwright and poet after Shakespeare, was at the height of his career. Inigo Jones (1573–1652) was the first major architect in England and the first to employ classical rules of proportion and symmetry in his buildings. His design of the Queen’s House was the first building in England to be constructed in the classical style. Yet, no major artist had spent significant time in England since Hans Holbein the Younger (1497–1543). Even good minor painters had been scarce. Few works by Italian masters had ever been imported.

Charles’s interest in these artists prepared him for an aesthetic awakening during a 1623 visit to Spain. King Philip IV of Spain had one of Europe’s most magnificent art collections; Italian Renaissance oil painting was particularly well represented.

King Charles embraced that model. Importing on a grand scale, he purchased works by Raphael, Leonardo da Vinci, Titian, and many others. Even ancient Roman sculptures were found by his agents. After a mere decade and a half, his collection included almost 2,000 pieces—comparable to what Spanish monarchs had taken a century to amass.

But Charles I didn’t stop with collecting works of earlier masters. He was equally devoted to the creation of new ones. By 1628, he was the primary employer of Orazio Gentileschi—one of the most important Italian Baroque painters. Sir Peter Paul Rubens, then Europe’s preeminent artist, visited England a year later. The king commissioned him to paint a series of works for the ceiling of Whitehall Palace’s Banqueting House.

In 1632, England saw the arrival of Anthony van Dyck and the beginning of one of history’s most significant artist-patron relationships. Van Dyck’s work was not just that of a great master. It was not just quantitatively vast. It also conveyed the spirit of life in King Charles’s milieu in a highly original way. Kings had previously been painted in highly formalized poses or contexts implying powerful leadership. Many of van Dyck’s paintings of Charles I maintained that tradition. Others capture scenes from daily life of the royals. “Charles I at the Hunt,” “Queen Henrietta Maria With Sir Jeffrey Hudson,” and “The Five Eldest Children of Charles I” all resemble photographs of people who “turn toward the camera” amid normal activities. One van Dyck portrait of Charles I and Queen Henrietta Maria captures a mutual tenderness previously unseen in paintings of royal couples.

Yet, some gaps remained in a collection that included such dramatic new developments alongside works by the greatest of old masters. King Charles had not been portrayed in sculpture. And he did not own any works by Bernini—the greatest sculptor since Michelangelo and his only rival. For Bernini to sculpt the king would fill both gaps. There was just one problem. Bernini worked for Pope Urban VIII. Leaving Rome for an extended period would do his career more harm than good. Charles couldn’t leave his kingdom without serious political or military need.

Those obstacles aside, both Bernini and Pope Urban were anxious to accommodate the king. For Bernini to receive a commission from such a famous foreign connoisseur was particularly flattering—and sure to be well rewarded. The pope had stronger motivation. Though unable to repeal anti-Catholic laws without the consent of an unwilling parliament, the pious Anglican Charles had considerably reduced persecution of English Catholics.

Bernini agreed to attempt what no sculptor had done before. Accurately depicting someone in marble is even harder than doing so with a paintbrush. Bernini would go further—sculpting someone he had never seen in person. That required using the most accurate portraits as models, and van Dyck was the obvious collaborator. In addition to being Charles’s standard portraitist, he had known Bernini while working in Rome.

The bust was a triumph. Its fame quickly spread throughout Europe, and within four years, Bernini was called upon to repeat the performance—sculpting a bust of France’s Cardinal Richelieu from another triple portrait. Unfortunately, we must rely on that later work to gauge how brilliantly Bernini depicted the English king. Though inferior copies exist, the bust of Charles was tragically lost in a 1698 fire at Whitehall.