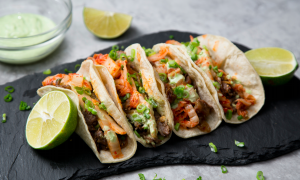 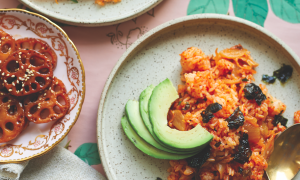 Korean Cuisine, Unfussy as Can Be
0 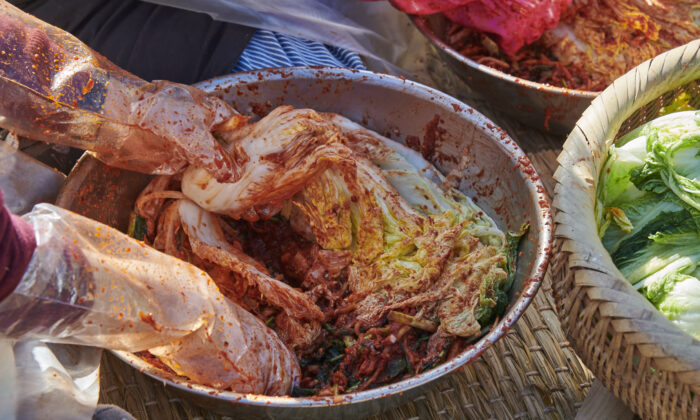 Coating heads of napa cabbage with a spicy, sour paste, to transform them into kimchi. (Courtesy of Nasoya)
Food & Dining

Before every winter, Korean families and neighbors gather to turn hundreds of heads of cabbage into the country's favorite fermented food
By Judy Joo
Print

Iksan, South Korea—I’m under an azure sky, crouched on my knees on a scratchy handmade straw mat laid over the morning’s frost. It is painfully cold, about 23 degrees, and I am grateful for the sun shining strongly on my back, warming me like a lizard basking on a rock.

I gaze up at the mountains surrounding the valley and the fluffy clouds hugging them; they have a cozy quality about them, happily cuddling the autumn-leaved mountain tops. I take a deep breath. The smell hits me at once. That undeniably funky, in-your-face stench of spicy, garlicky, fermented cabbage—the smell of kimchi. I love it.

Like a ripened blue cheese, kimchi is an acquired taste. But after the first bite, you risk becoming completely addicted.

It is Korea’s national dish, and pride and joy. Koreans eat it every day with every single meal, and many feel tragically incomplete without having consumed it at least once daily.

We’re known to even travel with packs of the stinky dish to satiate desperate cravings while abroad. My own parents are indeed guilty of this rather embarrassing crime, and I remember cringing whenever my mom fervently busted out a pack of kimchi, as if it were some kind of emergency survival food, while we were traveling.

At the time, I declined in stubborn protest, but in secret, I too craved a nibble. These days, I am no longer embarrassed, and instead fully and unabashedly embrace my kimchi cravings.

According to the Museum Kimchikan in Seoul, there are over 250 different official varieties of kimchi. In fact, any fruit or vegetable can be “kimchied,” so long as it can withstand the fermentation process. Radishes, apples, mangoes, broccoli, and leafy greens can all be transformed into this spicy, sour, slightly sweet side plate.

The most popular version, though, is cabbage kimchi, which is what I am making today, here in the Jeolla province of Korea.

Kimchi has a long history in Korea, dating back to at least the Baekje Era (18 BC–660 AD). The practice of simply salting and fermenting crops to last through the winter was originally developed as a means of necessary preservation.

Later, more flavorful ingredients such as ginger and garlic were added, and then jeotgal, fermented fish, was incorporated to provide an affordable source of protein to the masses. This addition of salted seafood also gives kimchi its characteristic complex umami taste.

Chiles were mixed in later, during the 16th century when Portuguese traders came through the peninsula, and kimchi as we know it today was born.

For generations, families and friends have come together to partake in kimjang, the annual wintertime celebration of making and sharing kimchi for the year. After the fall harvest in November, when cabbage is at its sweetest, members of the community will convene to transform hundreds of leafy heads into kimchi.

It’s a tedious and time-consuming tradition, a collective, multi-generational effort that involves dozens of people of all ages. Everyone helps out—salting, stuffing, and packing the enormous parcels for days.

It’s hard work, and when I ask members of the older generation about their memories of kimjang, they mostly describe it as painstaking and back-breaking. One woman reminisced making 500 heads of cabbage, and quipped dryly: “It was hell.”

But another elder woman offered a different perspective: kimjang is not only a time to make a year’s worth of kimchi, but also a time to hear a year’s worth of memories, she said. Talking, gossiping, and singing often surrounded the process, making it so much more special and memorable.

For my kimjang experience, I join a mother-daughter team, the mother in her 80s and the daughter likely in her 50s, and few of their neighbors, 60-something-year-old women.

I jump in to help for just a few hours, and already find it rather physically excruciating. Kimjang is always done outside and on the ground, and I’m not used to squatting, crouched over on my knees, for hours. My legs fall asleep in the first 15 minutes.

Despite my discomfort, feeling both cold and contorted, I’m keenly aware that I’m kneeling on sacred ground. I’m in the city of Iksan near the famed Mireuksa Temple, where the oldest known kimchi jar, dating back about 1,300 years ago, was found.

The area still harbors a strong tradition of kimchi-making—including in modern factories, such as that of manufacturing giant Pulmuone-Nasoya—due to the fertile soil, which yields quality crops to make kimchi.

First, I gear up, pulling on long, bright pink gloves that go up to my elbows. Kimjang is messy work, and I am prepared to get involved. The other older women with me are more experienced and hardcore, and thus don’t bother with any gloves. (I feel like a wimp, but I’d prefer not to reek of chilis and garlic for days after.)

The first step is to make the kimchi paste, a concoction consisting of a copious amount of gochugaru (Korean sun-dried chile flakes), ginger, salted shrimp, anchovy sauce, plum extract, stock, and a rather offensive amount of garlic. In a wide ceramic bowl, the women grind together all the ingredients to form a thick, wet, fiery red paste.

They add julienned radish, carrots, and Korean pears, as well as radish tops and wild garlic chives to the mix, and distribute the finished paste among several large bowls to pass around. Whole brined cabbage heads are stacked in bamboo trays around us, waiting to be stuffed. We are now ready to begin the kimjang.

Applying the kimchi paste requires a specific technique, to ensure that every inch of the cabbage, including the innermost parts near the root, is covered.

We start with the outermost leaves, peeling them back and slathering both sides with a generous amount of the paste. We repeat, working toward the center, until every leaf has been covered and shines with a bright red hue. Then, we gently wrap the head with its outer leaves, swaddling it like a precious newborn baby, before placing it to bed to ferment.

Traditionally, fermentation was done in onggi, large ceramic jars that were buried in the ground to keep them cool. Nowadays, Korean families have specialized kimchi refrigerators, which keep the kimchi at an optimal temperature and humidity, and contain its pervasive stench.

We go the traditional route and fill up large onggi, packing the cabbage carefully inside, Jenga-style. These urns will remain untouched for up to a year, allowing the bundles inside to ferment in peace.

We continue this process of stuffing every cabbage full of paste, wrapping, and packing, all under the autumn sky. It is this handmade process that Koreans say gives kimchi its special “sohn mat,” or “taste of the hand.”  And according to old lore, it is nature’s elements that provide the finishing touches that lend kimchi its distinct flavor, which is why kimjang is done outside—to ensure the addition of the sun, stars, moon, wind, snow, and rain.

Even so, the tradition of kimjang is slowly dying, sadly, as families become busier and prefer to buy their kimchi ready-made. Still, some families do endure and engage in a yearly kimjang, just on a smaller scale.

My 70-year-old aunt still makes kimchi for the whole family in Korea. I ask her why she bothers, as you can now purchase high-quality kimchi so easily.

She simply smiles and says, “Because I am Korean.”

I laugh, understanding that Korea’s identity is deeply embedded in this small, pungent side dish. It’s spicy, dramatic, feisty, vibrant—just like a Korean.