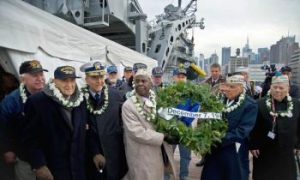 It’s certainly an acquired taste for most Westerners. Some embrace the fermented vegetable dish, and some will pinch their noses as soon as a jar of it is opened.

Koreans have been eating kimchi for around 1,700 years. Though many varieties of kimchi exist—including those that incorporate fish, radishes, and scallions—the kind that comes to mind for most outside of Korea is the Baechu variety made from Napa cabbage, otherwise known as Chinese cabbage. Baechu, which is layers of whole cabbage leaves seasoned with chilies, is eaten chiefly during autumn months.
Because of Korea’s harsh, cold winters, kimchi is an essential source of vitamins and minerals during those months.

Kimchi and rice are to Koreans what meat and bread are to Westerners. It is such a staple that the Korea Aerospace Research Institute developed space kimchi for a Korean astronaut aboard the spaceship Soyuz in 1968.

Mid-October is the season for Korean families to make kimchi. This has been an important event every year for generations and has been an integral event in Koreans' preparation for their long, cold winters.

The Gwangju Kimchi Festival is held for five days from Oct. 15 to 19 at the Gwangju Folk Museum in Gwangju in the southwestern province of Jeolla-do.

This region is well known throughout Korea for the best food in the country. Many attribute this to Jeolla-do’s particularly delicate and refined traditional culture and clean environment. The festival has been running for fifteen years since 1994.
It’s a typical Korean autumn day; the sky’s clear and blue, the temperature mild and the sunshine golden. Most of the participants are Korean.

Lots of children and foreigners had a go making kimchi at the kimchi workshop tent. They learn about kimchi, make the kimchi themselves and get to take it home to eat.

“This festival aims to show that Kimchi is not just a food but a culture,” said the festival’s project manager, Mr. Samjo Joung. “Kimchi is very important to older Korean people—to them it’s like air. They just love to eat kimchi. These days the younger generation’s taste has shifted to Western style food so they do not like kimchi as much as their parents. In order to promote the tradition of eating kimchi, we”ve designed a program where people can make kimchi for themselves and have fun with the vegetables.”

Mrs. Eunsook Kim, dressed in the traditional Korean hanbok, gives demonstrations on how to make a special type of kimchi called gatmul, which has medium-hot, fresh and sour varieties. She is proud of the kimchi from Jeolla-do province and wants to see it exported to the world. “Many people do not realize,“ she says, “but kimchi is an excellent cure for hangover.”